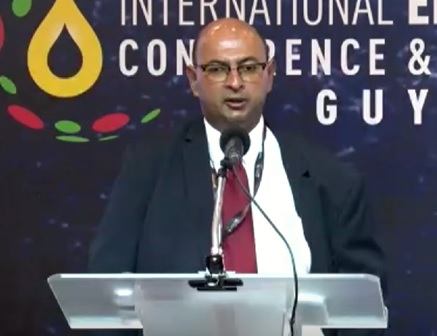 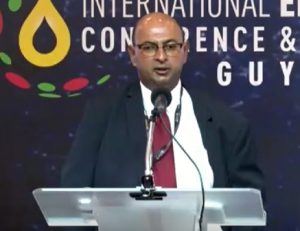 The US$700-million dollar Amaila Falls hydropower station is to be built and operated under strict contractual and regulatory rules but no costs were provided for associated contracts, according to Project Leader Winston Brassington.

“Like any large project, there is a lot of risk in these projects but most of these risks have been put to the developer,” adding that they include the construction cost with all the “usual checks and balances”, geotechnical risks, hydrology risks, and force majeure risks.

He told the just-concluded International Energy Conference Guyana that the 165 megawatt station itself would cost U$500 million but the government would not be paying for the facility. Under the Build Own Operate and Transfer (BOOT) model the company, China Rail, would be selling power to the Guyana Power and Light (GPL) at 7.7 US cents per kilowatt hour. “This cost is largely the repayment of financing,” he said.

Actual work on the ground could start by the third quarter of this year.

No reference was made to the possible impact of drought or less rainfall, a climate change problem that has dogged hydropower plants in neighbouring Brazil and Venezuela as well as other South American nations.

Mr. Brassington did not say how much project supervision, operation and maintenance contracts could possibly cost. “We will have independent supervision which will be internationally tendered to review the works that had been done so we will hire through a public tender a world class project supervision firm to ensure that what is being designed and built is built to those standards. We also agreed that we will have an international O and M ) (Operations and Maintenance) operator so when it’s built, we will have someone who will be competent to operate this,” he said.

He highlighted that the projected operational costs to the Guyana government after it is handed over to the State at the end of the 20-year BOOT period would “probably” be 1.1 US cents. “This project has a long life; it could be 75 or 100 years so we are essentially paying for this project over 20 years,” he said.

The project will come at a time when GPL’s total peak demand grow from 135 megawatts last year to about 500 megawatts in 2025/2026, something that will be linked to an increase in Guyana’s Gross Domestic Product. Government plans to add gas, solar and wind.

Mr. Brassington, who had previously headed the Guyana government’s holding company for State assets, said the project would include 270 kilometre double circuit 230 KVA line from Amaila to GPL’s  operations in Georgetown.

He said the project, which would include the upgrading of roads and bridges coming from Amaila and the construction of a 23-square mile reservoir, would be located just north of the Kaieteur National Park. “All of the environmental studies were done many years ago. There are literally thousands and thousands of pages of studies that were done,” he said.

According to top government official, who is also overseeing the gas-to-shore project, government would not be guaranteeing the hydropower project but would do so for GPL’s performance. The sponsor is expected to obtain political risk assurance and would have an  Engineering, Procurement and Construction Contract (EPC) that was developed by Blackstone in 2012. “This is an international contract that was vetted by experts and negotiated over a long period between 2010 and 2012,’ he added.

Three Chinese and one Brazilian company had submitted proposals but Mr. Brassington said China Rail was picked by the National Procurement and Tender Administration because “that was largely based on the lowest price per kilowatt hour over a 20-year period.” Mr. Brassington recalled that when the United States-based Blackstone had pulled out of the process in 2015, China Rail had stepped up as the replacement company.

The then A Partnership for National Unity+Alliance For Change (APNU+AFC) administration had scrapped the project and remained unconvinced about its prospects based on a study by the Norway firm, NORCONSULT.

Antisemitic materials are dropped into driveways at Colleyville and Garland homes