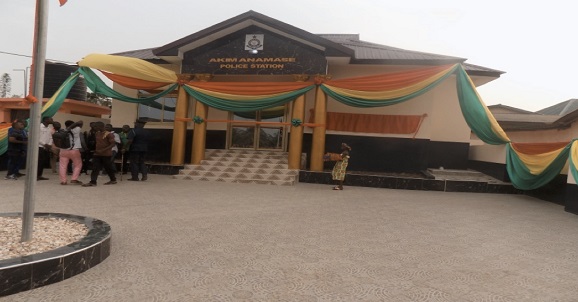 The front view of the new police station

The Senior Minister, Mr Yaw Osafo-Maafo, has stated that the government was keen on strengthening the safety and security of the nation to build the confidence of investors. 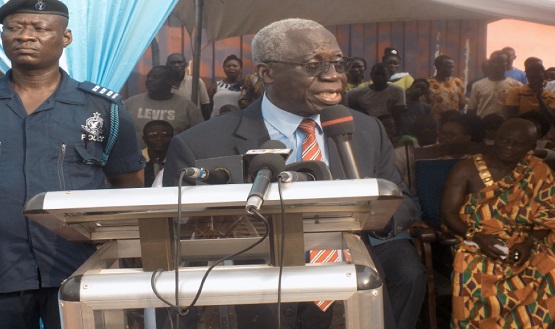 Mr Osafo-Maafo delivering his address at the function

He said without security, law and order, no investor would do business in the country.

Mr Osafo-Maafo made the pronouncement when he inaugurated a GH¢150,000 police station at Akyem Anamase near Oda in the Eastern Region last Friday.

The project, equipped with air conditioners and flat screen TV sets, was constructed by a citizen of the community, Mr John Appiah Biney, who is an Accra – based industrialist and Chief Executive Officer (CEO) of J. A. Biney Company Limited.

Mr Osafo-Maafo commended Mr Biney for his commitment to the development of his hometown and Ghana, in general, and urged other affluent people in society to take a cue from him and contribute their quota towards the rebuilding of the nation.

The Senior Minister announced that a number of roads in the area had been awarded on contract for bituminous surfacing.

He said the Oda, Koforidua and Nkawkaw town roads would also be asphalted this year to give a facelift to the three towns.

The Eastern Regional Police Commander, Deputy Commissioner of Police (DCOP) Mr Afful Boakye Yiadom, who deputised for the Inspector General of Police (IGP), encouraged the public to support the police service materially in its delivery.

That was because the police alone could not provide all their needs to ensure public safety.

DCOP Yiadom warned that nobody had the right to mobilise people to attack police stations and forcibly release suspects in lawful custody.

He advised the police to refrain from unlawful arrests, detention of suspects, extortion of money from complainants and suspects’ families or exhibit any unprofessional conduct that would bring the name of the police into disrepute.

He gave an assurance that the police administration was prepared to post personnel to any community which used its own resources to put up a police station.

Mr Biney said he decided to establish the police station at Anamase to facilitate the establishment of a branch of a bank and other investments in the town.

He gave an assurance that he would join forces with the community to construct residential accommodation for the police on a 10-acre parcel of land released for that purpose by the Abamase traditional council.

A Tema-based freight forwarder, Mr Kofi Ahenkorah Marfo, donated GH¢5,000 towards the construction of the police barracks, while the Chief patron of Accra – based Fitness First Health Club of which Mr Biney is a member, Mr Albert Akoto, donated two flat screen TV sets, a motorbike, a table top fridge and six plastic chairs worth GH¢30,000 to the police, with the MP and Mr Anthony Agyemang, a Tema-based freight forwarder, presenting a motorbike and 32 inch flat screen TV set, respectively, to the police.

The Principal of the Winneba Community Health Nurses Training School, Ms Minnie A. Okai, presented a citation to Mr Biney for his commitment to the development of his hometown and Ghana in general.