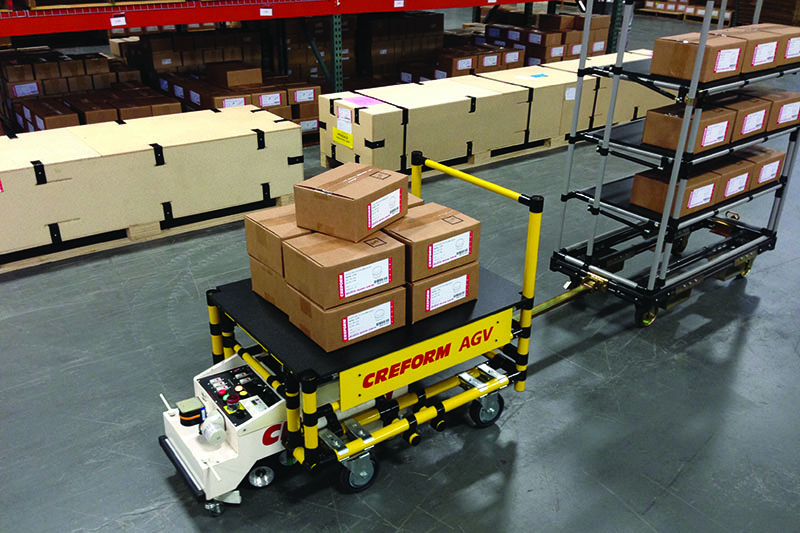 If you read Modern’s August cover story on Toll Group’s new 550,000-square-foot multi-channel distribution center in Sydney, Australia, you would have noticed something unfamiliar along with the multi-shuttle and goods-to-person picking stations that are common to piece-picking operations: the use of AGVs to optimize pallet movement from reserve storage to the shuttle induction area. The AGVs aren’t used everywhere in the facility—it makes more economic sense to use lift trucks for shipping, receiving and putaway processes—but Toll saw them as a solution to a long non-value-added run. And, they created a safer work environment.

AGVs are still a rarity in multi-channel distribution; they are far more likely to be used in manufacturing or finished goods pallet warehouses where the work is more predictable. Still, Leon Land, Toll’s senior manager of product delivery, views them as a technology that is “going to change the future of warehousing.”

Mike Kotzian, a senior sales manager for mobile automation for North America at Dematic, notes that the installation at Toll is part of a significant shift in the willingness of customers to consider AGVs for tasks that were previously the domain of lift trucks. More importantly, the Toll project illustrates that the AGV market is anything but static. Rather, thanks to new navigation capabilities, flexible automation, maintenance options and software capabilities, the market is more dynamic and versatile than in the past. 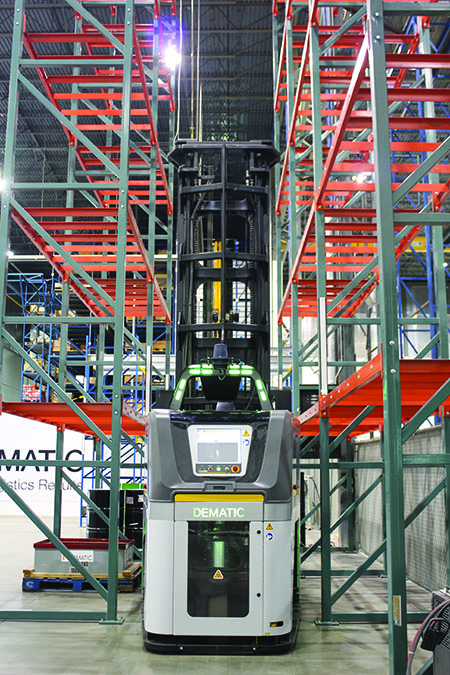 Traditional AGV navigation relies on lasers, inertial guidance and magnetic tape. There are still plenty of applications where those tried and true methods fit the bill. “Everybody likes to harp on magnetic tape because a strip or bar in the floor doesn’t seem very high-tech, but it is a very powerful way to provide guidance in terms of ease of installation and low cost,” says Nick Ellens, autonomous vehicle development manager for Daifuku Jervis B. Webb. “It’s a very straightforward and simple way for people without technology backgrounds to make the vehicle go where they want.”

Those systems are especially suited for applications with standard and predictable routes, such as those you find in a plant or finished goods warehouse. Distribution centers fulfilling orders that call for mixed cases or piece picking are much more dynamic, even if cases and totes are then going onto pallets for delivery to a staging or pickup location or to the shipping dock.

For those reasons, AGV manufacturers are now moving beyond tape and adopting navigation technologies such as simultaneous location and mapping (SLAM), light detection and ranging (LIDAR), lasers, cameras and natural feature or contour guidance. Opportunities with virtual paths center around how the system plans those paths and how to guide and localize each unit. However, Ellens notes, while SLAM, natural feature and contour guidance are very cool, they have their limitations. Where they don’t work, complementary laser guidance with reflectors could do the trick. “I think coupling that with vision is the next step for the industry,” Ellens says. “The goal is to use the inputs of different sensors to shore up the shortcomings of other sensors.”

The latest sensors also help AGVs navigate upward into racks. Ever since their inception in the 1950s, AGVs have been laser-focused on tackling non-value-added movement. For decades, that meant horizontal movement. Instead of merely ferrying from receiving to staging for putaway by a manual very narrow aisle (VNA) forklift, Kotzian says the same unit can perform the entire process. One such AGV is capable of lifting single or double pallets and placing them double-deep with a pantograph at 390 inches. Kotzian says the setup can achieve the same density as VNA, but is less expensive and more flexible, with a mast that can collapse to traverse throughout a facility.

The case for flexibility

Flexibility is at a premium these days, says Ellens, while fixed infrastructure is less desirable. For example, consider a company using a towline conveyor or some fixed monument for moving items through the assembly line. “That’s a wonderful way to do that—up until the product changes or you want to add efficiency. Now you have this monument that was expensive to install and to change and then you’re left with what? A different monument,” he says. “AGVs by definition are very dynamic, so when products change you simply reconfigure where the AGVs drive, start, stop and now you have the same assembly line with a quick changeover.”

Ellens says it’s not hard to imagine these sorts of changes happening weekly as the warehousing and distribution sector becomes more involved with Amazon-style supply chain decisions. AGVs can support constant reconfiguration to house different products, the use of different tracking methods and better position users to react well to change.

Keith Soderlund, vice president of sales for Creform, says his company continues to focus on magnetic guide paths for some simple reasons: It’s quick to install, reliable, comparatively low in cost, and, perhaps most importantly, easy and inexpensive to maintain. That addresses another finding from the recent study, which was that 39% of users of automated materials handling technologies were completely satisfied with the maintainability of the systems, while a similar number were dissatisfied.

“Many DCs don’t have enough qualified maintenance technicians as it is, and AGVs and other automation need quick and competent on-site support,” Soderlund says. “Even someone just forgetting to charge batteries at the end of a shift can wreak havoc on a lean operation.”

According to Soderlund, many prospective clients have very few people doing maintenance, and some don’t want to touch the AGVs at all. For those who rely on the AGV manufacturer for support, on-site maintenance folks can become a training opportunity for the customer’s crew. “Nine times out of 10, it’s pretty basic and easy to troubleshoot and repair,” Soderlund says. “They’re relying on it for daily production, so if it goes down, they want to recover quickly.”

Ellens says the use cases for AGVs have expanded drastically in the past few years, both in terms of the types of companies interested and the applications they’re looking to address. Previously, interest tended to come from larger companies who could afford the sort of capital expenditure AGVs once required. Now, more mid-level companies and Tier 2 supplier-level companies are looking at this type of automation on a smaller scale, Ellens says. “The cost of AGV ownership is going down and labor costs are going up,” he says. “Companies that traditionally relied on the human factor find it’s now affordable to automate for economy and consistency.” 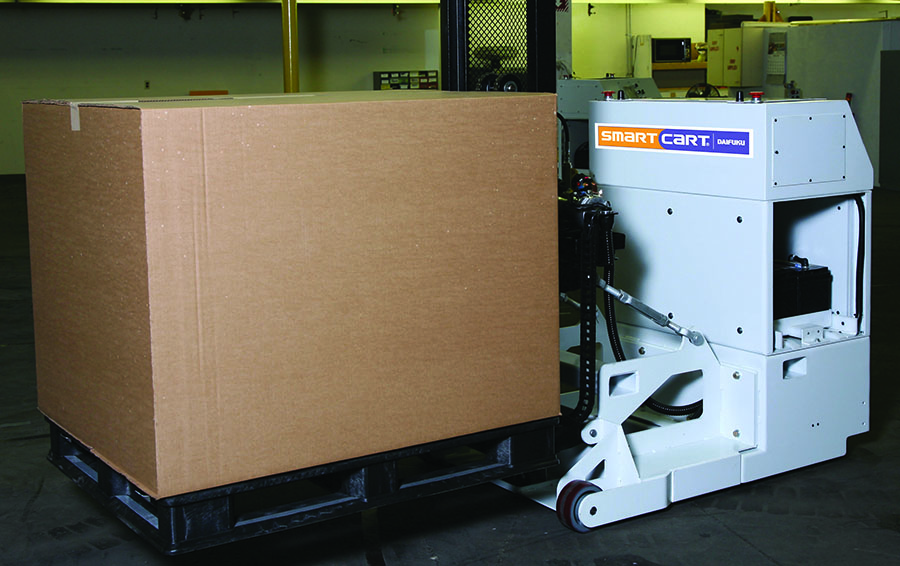 Ease of use is critical to enabling customer ownership of automation, allowing them to creatively adapt as needed.

Carlos Millan, manager of business development in the Americas at Oceaneering AGV Systems, adds that operational aspects like safety improvements might be difficult to quantify, but are nonetheless an important part of ROI calculations. “Between predictability, consistency, reduced product damage and decreased injury risk, there are hard costs and some soft costs which are tough to disqualify,” Millan says. “This is driving interest in the DC market, food and beverage, retail, kitting, automotive and manufacturers of larger products.”

Ellens also cites increased compatibility with off-the-shelf parts as a significant way to reduce AGV maintenance costs. Additionally, improved software facilitates easier interaction with the equipment. It’s now more possible to achieve a high level of user ownership, Ellens says, which increases the performance of AGVs and unleashes the creativity of the user to adapt equipment to its changing needs.

Traceability is a big part of why AGVs are catching on, Ellens says. As companies become more cognizant of material flow, the ability to use sensors, tracking technologies and software to quantify the materials on a vehicle allows a higher level of granularity in terms of how it moves through the process. Where is an item within the factory? It’s on this vehicle, at this location. “That’s powerful in the context of Internet of Things and data-driven operations in Factory 4.0,” Ellens says. “It facilitates a data-driven mentality.”

Ellens is confident the future is highly integrated. “AGV technology really lends itself to direction by all the brainpower and computing that’s tracking everything in the plant,” he says. “As facilities get more and more data from various parts of the warehouse or DC, the natural next step is directing equipment based on that analysis. I think it’s inevitable AGVs go in highly integrated environments and collaborate with other data processing systems to add even more value.”

After all, he adds, an AGV is really an execution system, so as new technologies allow better decision-making, they’ll want flexible execution equipment that can use the data. “Coupling that with a high level of efficiency from decision making can create an excellent flow down from data aggregation to execution that can really improve efficiency and consistency, the two main drivers of material flow in the future,” Ellens adds. “It’s a very fun and exciting time, and we’re on the threshold of some very cool things from AI, new applications, the rise of e-commerce and the Amazon Effect. The AGV industry is on the crest of that wave.”

Companies mentioned in this article: