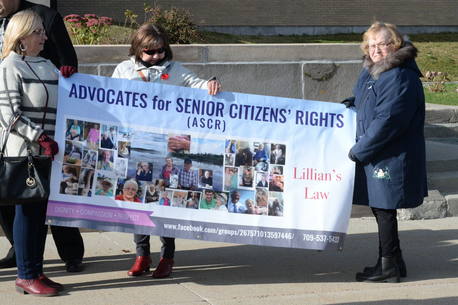 A seniors’ advocacy group is calling on the government to introduce legislation that would improve the lives of patients at long-term care facilities in Newfoundland and Labrador.

Advocates for Senior Citizens’ Rights has made a lot of noise in the last three years on behalf of people living with dementia, Alzheimer’s disease and other ailments. The group has lobbied the government to adopt Lillian’s Law, which would require these facilities to operate with staff-to-patient ratios of one-to-three.

The proposed law is named after the mother of Sharon Goulding-Collins, the group’s founder. It’s preparing to hold a demonstration outside of a public consultation the provincial government is hosting Thursday evening on a dementia care action plan at the Comfort Inn in St. John’s.

Goulding-Collins says the facility where her mom lives was operating at a ratio of one staff member per eight or nine patients at the time she initially started developing Lillian’s Law. The ratio recommended in Lillian’s Law is based on policies and standards that already exist at regional health authorities, but are not being followed, she said.

“We just want to have accountability with a law to ensure that they receive adequate care,” Goulding-Collins said.

The group recently established a series of agenda items to address in the immediate future, including the possibility of taking actions similar to those of seniors groups in Quebec that launched a class-action lawsuit against that province alleging abuse at long-term care facilities. It also wants to establish a seniors’ bill of rights in Newfoundland and Labrador.

Jerry Earle, president of the Newfoundland and Labrador Association of Public and Private Employees (NAPE), knows all too well there is an issue with staffing levels at these facilities.

“What we’ve heard from our frontline workers — licensed practical nurses, personal-care attendants — they believe in particular in long-term care there’s an extra demand placed upon them,” Earle said. “They’re saying staffing levels are concerning to them.”

NAPE approached the government last winter on the matter, and the province has since established formalized committees with the union. Earle said the government is looking at ways to increase the number of local licensed practical nurses and personal-care attendants graduating from colleges to help meet the demand for their services.

The province is also working with regional health authorities to try to address the issues workers face, among them an increase in staff injuries, inability to take time off and significant overtime demands, he said.

“Staff are telling us they just cannot do what’s necessary for residents in a normal workday,” Earle said, adding it’s a provincewide issue.

He’s open to anyone suggesting ideas to help patients and staff, but says the union’s efforts to work toward a resolution with the government need to be given a full chance to succeed.

While the efforts of Advocates for Senior Citizens’ Rights may not help her mom, who is in the latter stages of Alzheimer’s disease, Goulding-Collins says it’s essential to address the problem now for the sake of those who will someday live in long-term care homes.

“I do this for everyone because it affects everyone, young and old, because we will all be old one day,” Goulding-Collins said.

Thus far, the group has gained support from the NDP and independent MHA Paul Lane, but discussions with other political parties have not produced a favourable result.

In a statement released to The Telegram, a spokesperson for the Department of Health and Community Services said there are currently no plans to implement Lillian’s Law.

It noted the government is reviewing the long-term care home operational standards, first adopted in 2005, alongside the four regional health authorities.

That review will take into account policies and practices in other provinces and countries, and a core staffing review involving all health-care facilities in the province will also address long-term care homes, the department added.

“The current operational standards do not dictate the number of staff — instead they require that residents have individualized care plans. The department works closely with the regional health authorities to ensure residents in long-term care facilities receive quality, individualized care.