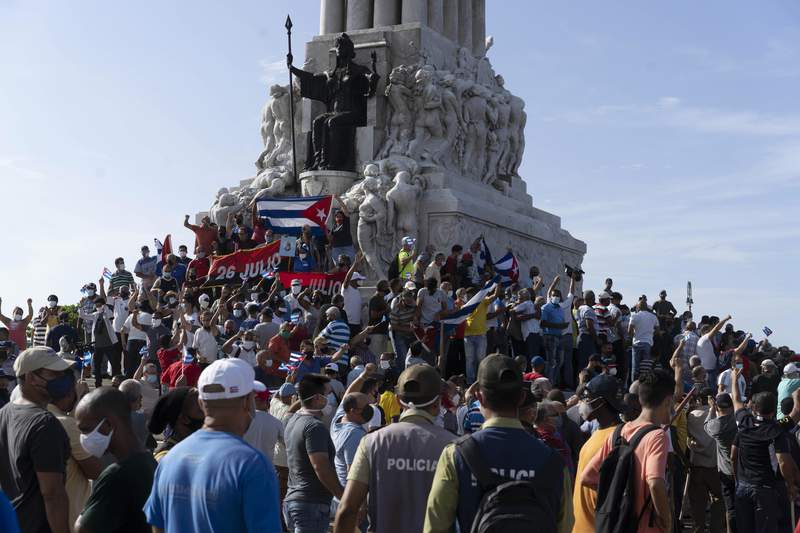 ORLANDO, Fla. – Thousands of people poured into the streets in Cuba on Sunday in what is becoming the largest anti-government protest in decades.

Demonstrations lasted for hours as they popped up all over the 777-mile stretch of the island, with people rallying against the country’s worsening economic situation, failure to address the coronavirus pandemic, a lack of freedom and disgust for the government.

This is a rare moment for the communist country as its government structure has been put in place for decades with harsh penalties for those who speak out against it. Here’s why the recent protests matter and what it means for the island.

60 years in the making

After Fulgencio Batista was overthrown in 1959, Cuba entered a new era with Fidel Castro.

The Castro regime started with arrests, acts of torture and executions against anyone who supported the former president or openly opposed the new one. The country’s new leader paused elections indefinitely and dissolved the capitalist system in Cuba.

Instead, Castro established a centrally planned economy, meaning Cuba would decide when goods could be sold and how much of them. This new economy meant families were prohibited from purchasing certain food, clothes and other items due to production limitations established by the government.

The new administration also assigned jobs to its people, regardless of education and experience. Engineers became bus drivers, children were asked to work on state farms and pay was standardized, with the average person in 2019 taking home about $225 a month, which is less than $60 a week.

Historians say decades of oppression took a toll on the island’s residents, with people opting to leave if they can. Those who choose to stay, or who can’t leave, have to live under these conditions.

To note, the country’s decline in food and medical care started years ago. The coronavirus just made it worse.

Inflation, trade embargoes and a decline in aid have caused acute medical shortages, according to the Association For the Study of Cuban Economy. Cuba’s health minister reported last June that 116 basic medicines were scarce. Shipping delays due to the pandemic and global shortages have only exacerbated the problem.

Food security has become a rising national issue through the coronavirus pandemic. The island imports around two-thirds of the food it consumes. Imports are becoming more scarce due to economic fallout from the pandemic and Trump-era trade embargos. Food scarcity is becoming such a troubling issue, economists are saying it’s borderline a famine, especially as Cuba has called on its citizens to grow their own food.

People protesting say they are hungry. The outcries are for food, access to basic medicine and basic human rights. People were lining up outside of pharmacies and state-run grocery stores before the pandemic. Today, demonstrators say they’re fed up with waiting and walking away with nothing.

Tourism was once one of the main sources of revenue for the island. In 2019, it earned around $4.1 billion from tourist visits.

By the end of December 2020, during the coronavirus pandemic, Cuba had experienced a 74.6% drop in international visitors compared to those that came in 2019 with numbers continuing to decline, according to World Tourism Organization numbers. This drop is not only the result of Cuba closing its borders but also due to restrictions imposed by other countries working to keep COVID-19 infections under control.

Cuba started allowing foreign visitors last July, but they’re not coming in at the capacity that could sustain the country’s economy. With shortages, a global pandemic and the country struggling to rebound economically, its residents are suffering from the impacts.

More than 11 million people call Cuba home. The median age of the country’s residents is 42 years old, meaning that many were not alive during the Cuban Revolution or when Fidel Castro implemented his regime in 1959.

For context, this means that most of the island’s residents have only known trade sanctions, scarcity, authoritarian rule and what some call oppression.

It’s a new generation experiencing what historians may call “old Cuba.” As the residents have seen three different leaders, gained access to cellphones and utilize limited access to the internet, there’s a different level of awareness.

This is what has sparked historic protests across the entire island — not just in the urban areas. Protestors are livestreaming the unrest, which inspired copycat demonstrations elsewhere on the island. This helped create one of the largest movements since the 1994 Maleconazo uprising, which is dubbed “Cuba’s first popular revolt.”

They’re not just in Cuba

Another key element to note is that the Cuban diaspora has taken root all over the U.S.

Miami is known for its Cuban population. With thousands of people shutting down streets and calling for freedom on the island, similar cries were heard from demonstrators in New York, Philadelphia, Jacksonville, Orlando and in Washington D.C.

The people of Cuba have a connection to a world outside of their island and that connection looks like constituents in the U.S. asking their lawmakers to take action.

A House committee just approved $20 mil to support democracy, human rights, civil society, & the private sector in Cuba. Congress should boost this funding to show the Cuban people we’ve got their back. pic.twitter.com/a0eENadM3x

Though the people of Cuba do not have freedom of speech, those with that human right elsewhere are using it to draw attention to issues on the island.

Brexit: What is the Internal Market Bill and why is it controversial? | UK News