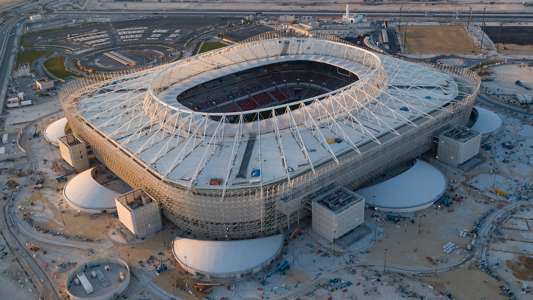 Al Rayyan stadium, one of the eight venues for the 2022 World Cup in Qatar, has achieved a major sustainability rating from the Gulf Organisation for Research & Development (GORD).

In what is a feather on the hat for the Supreme Committee for Delivery & Legacy (SC), the sustainability features at the Al Rayyan stadium came in for a commendation. The venue’s design, construction, management and energy efficiency were found to be in line with the Global Sustainability Assessment System (GSAS) by the GORD.

The 40000-capacity stadium is undergoing the final stages of its construction and is expected to be inaugurated very soon, becoming the fourth 2022 World Cup venue to be completed after the Khalifa International stadium, Al Janoub stadium and the Education City stadium.

It must be noted that the stadium was constructed after demolishing the Ahmed Bin Ali Stadium. Most of the materials from the demolished stadium were used in the construction or were recycled. The project achieved a landfill rate of 90 per cent, given that they kept construction and demolition waste to a minimum.

It is also 20 per cent more energy efficient compared to other venues and uses 20 per cent less water, thanks to sustainable measures.

Al Rayyan is set to play host to seven matches during the 2022 World Cup. After the tournament, its capacity will be brought down to 20000 and it’s modular upper tier will be removed and donated to a suitable footballing project overseas.

Engineer Jassim Telefat, the Supreme Committee for Delivery & Legacy’s (SC) Competition Venues Executive Director, said: “We are very pleased to receive these GSAS sustainability certifications from GORD. These awards highlight our ongoing commitment to sustainability and our goal to leave a lasting legacy in this field as a result of Qatar’s hosting of the FIFA World Cup. I offer huge congratulations to everyone involved in the design and construction of this striking venue.”

Engineer Bodour Al Meer, the SC’s Sustainability & Environment Senior Manager, said: “Sustainability has been at the heart of the Al Rayyan Stadium project right from the very start. We were committed to reusing and recycling the material from the old venue and are proud to have included much of those materials in the new stadium. In addition, this project – like others related to Qatar 2022 – has prioritised the procurement of locally registered subcontractors and the use of recycled content.”

Kabaadiwallas not enough to fix India’s garbage problem, but this national project could be