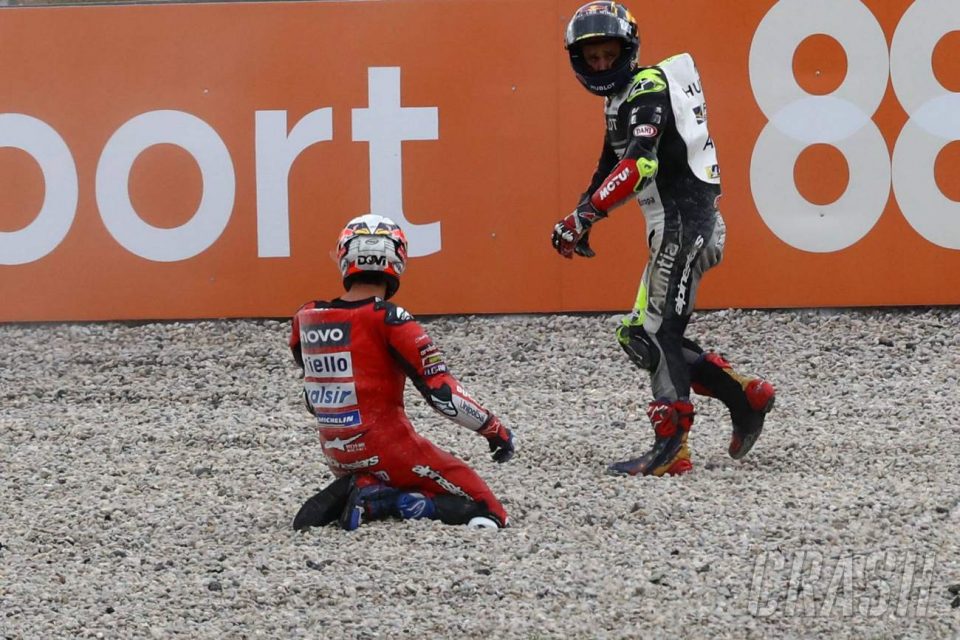 Johann Zarco says he was reassured his potentially title-influencing collision with Ducati stablemate Andrea Dovizioso at the start of the Catalunya MotoGP wasn’t used against him when it chose to promote Pecco Bagnaia into the factory set-up for the 2021 MotoGP season.

Ahead of the French MotoGP, Ducati confirmed its Factory and satellite Pramac line-ups, with Bagnaia winning the race against  Zarco to land the works deal, while the five-time podium winner progresses from Avintia Racing to Pramac.

However, timing wasn’t on Zarco’s side when he was embroiled in a Turn 2 incident with title-fighting counterpart Dovizioso just days earlier, caused when contact wiped out his front and sent him into the path of the hapless Italian.

Revealing he was told on the eve of the public announcement, Zarco admits he was worried the incident had cost him his shot against Bagnaia.

“I said ‘don’t worry Gigi, I am so happy to be with the Pramac team’, sincerely they did a great job in the last few races. But I was scared I lost the position because of what happened in Barcelona.

“I spoke with Dovi, I went to him because I was feeling bad. But he saw it too, what I did was normal but it was [just] a crash.”

Technical issues aside, Zarco enjoyed a strong start to his home Le Mans weekend with the third fastest time in the damp afternoon session, though he feels he isn’t quite as competitive on a dry track.

“A good day, it was good to have the first session in the wet to see how i’m going. At the end of the session I could push a bit more and finish second. It is a tricky track to find a lot of grip, it’s quite slippery so you have to be careful but the tyres are working quite well.

“Then in the afternoon, I decided to go out with rain tyres again to be as fast as possible just in case it rains because I was not sure with the slick it would be good with some patches.

“I had a small technical problem, so I could bring the bike back to the box and the team were pleased because the second bike was set for the rain.

“Tomorrow if it is full dry, we will need to be in the low 1m 32s which is quite a big step. You need full confidence to go faster.