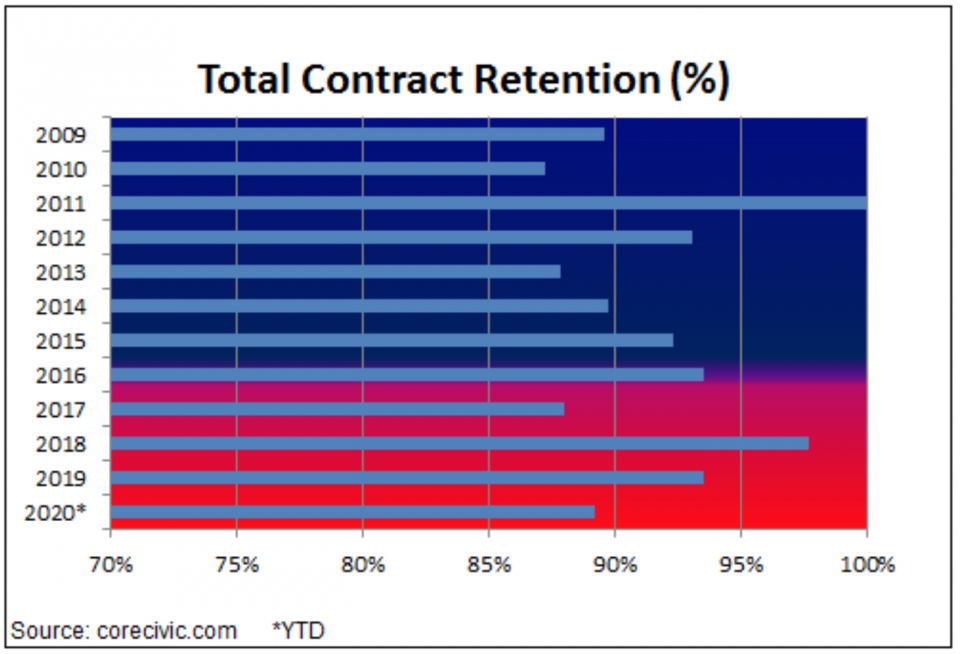 Tennessee-based CoreCivic (NYSE:CXW), founded in 1983, is the nation’s largest owner of partnership correctional, detention, and residential reentry facilities. CXW is in the process of transitioning its operating structure to a C-Corp. CXW has been a REIT since 2013, a structure that provides certain tax benefits and also mandates the company to distribute at least 90% of taxable income each year. Although the conversion to C-Corp will require higher tax payments, the structure will also enable CXW to retain and build cash at a faster pace than it currently can, as the REIT structure requires the return of most capital to shareholders.

Of total debt, the company has about $1.3 billion in debt that comes due by or before 2023 and had $282.5 million of cash on hand at the end of 3Q 2020. By building internally generated cash, CXW will be able to pay down a substantial amount of this before maturity and expects that it can refinance the remainder.

We note that in addition to cash of $282.5 million on its balance sheet at the end of 3Q 2020, CXW had another $329.2 million available under its revolver. In 1Q20, CXW drew down on the revolver to have added cash on its balance sheet for added liquidity as the economy slipped into a downturn.

CXW shares and the overall sector have underperformed over the past 12 months, which we believe creates a more attractive entry point. The underperformance reflects concerns about political and other risk, as well as among ESG investors, despite CXW’s efforts to begin publicly reporting on the education and vocational training programs it offers inmates to help facilitate their re-entrance into society. Some 30,000 inmates have earned high school equivalency diplomas or an industry trade certificate over the past five years.

In terms of political risk, the company’s cash flow and contract retention have been stable through different political administrations. CXW has renewed, on average, nearly 92% of contracts up for renewal each year regardless of the administration in office. 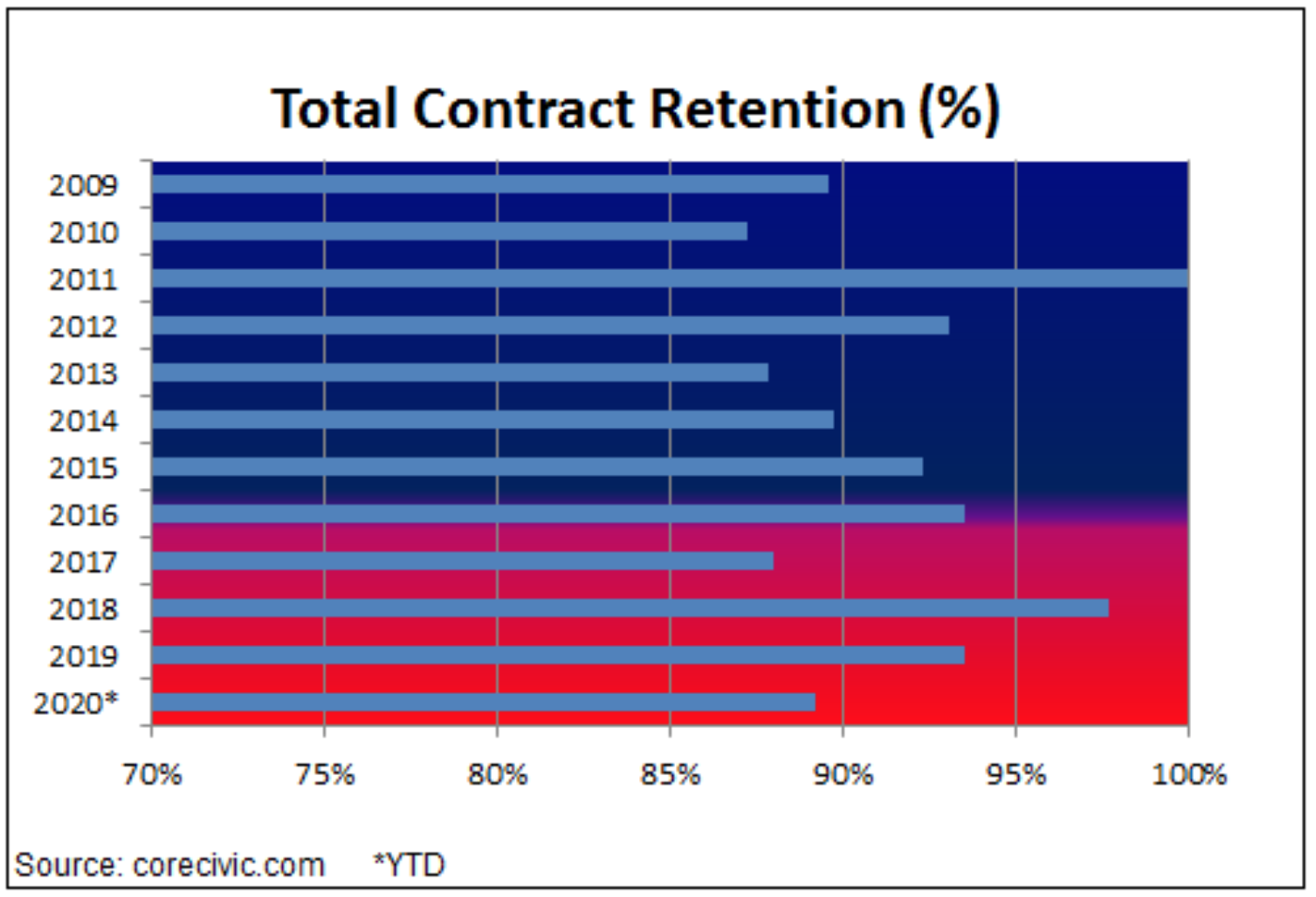 Management believes the shares are oversold at this level and expects to allocate a substantial portion of its free cash flow to returning capital to shareholders through share buybacks. Buying back outstanding shares is consistent with initiatives taken during the 2009 economic downturn when CXW was a C-Corp. From 2009 through 2011 when it converted to a REIT, the company bought $500 million of its stock.

Several of CXW’s government agency customers have reduced inmate populations during the stay-at-home orders of the pandemic. The company has been impacted mostly by the decision by the federal government to deny entry at the U.S. southern border to asylum-seekers and anyone crossing the southern border without proper documentation or authority in an effort to contain the spread of COVID-19, affecting ICE detainee populations. As a result, occupancy rates in many of the company’s facilities have come under pressure. Nevertheless, with COVID-19 also presenting health risks to inmates, agency awareness that newer facilities such as those owned and/or operated by CXW could present a competitive advantage from a health perspective that could help drive governments to transition inmates to CXW and other more modern facilities.

SUBSCRIBE TO ZACKS SMALL CAP RESEARCH to receive our articles and reports emailed directly to you each morning. Please visit our website for additional information on Zacks SCR.

DISCLOSURE: Zacks SCR has received compensation from the issuer directly, from an investment manager, or from an investor relations consulting firm, engaged by the issuer, for providing research coverage for a period of no less than one year. Research articles, as seen here, are part of the service Zacks provides and Zacks receives quarterly payments totaling a maximum fee of $40,000 annually for these services. Full Disclaimer HERE.

Stena Line’s 25th anniversary of ferries between Holyhead and Dublin