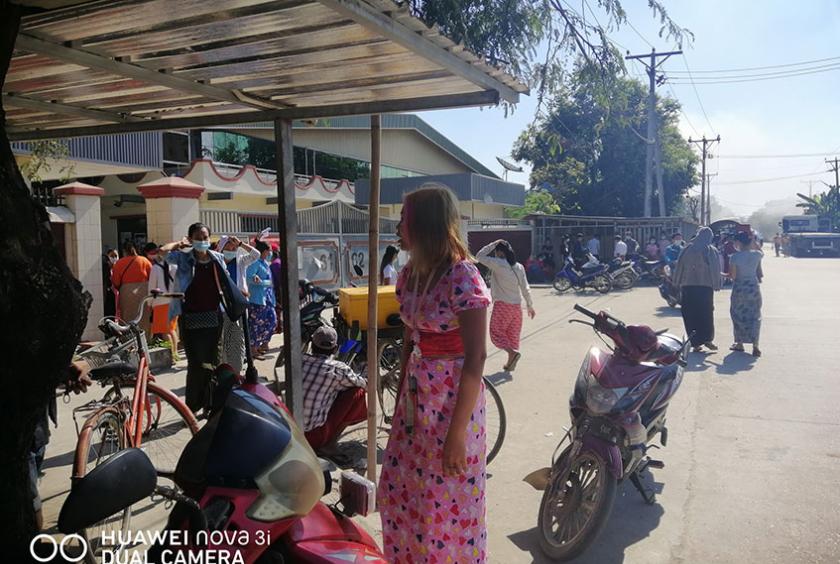 Workers from Houng Yun (Myanmar) Garment Factory in Shwepyitha Township, Yangon, which has just closed down, say they are watching the factory by taking turns in day and night shifts as they fear that the factory owner might abscond.

The factory owner announced the closedown on December 29. Although he has signed the agreement to pay salaries and compensation as per the law, workers have to keep a watchful eye on him for fear of possible escape like in other previous cases, a worker commented.

“The boss told us this morning the factory had been shut down promising to pay December’s salaries and compensation on January 5. He has signed the agreement. He said compensation would be paid in accord with the law. We have made lists for watching him. About five workers will be watching in a day shift and about 10 in a night shift. We fear he might run away. We made negotiations all day yesterday. The boss did not answer. When we asked for an exact answer, the boss said the factory had been closed down citing no order,” a worker said.

The worker continued to say that factory closure would cause many difficulties for the workers and they would find it difficult to find other jobs because most of the factories have closed.

A factory official cited no order or raw materials as the reason for factory closedown.

The garment factory with over 300 workers had opened just for six months.

On December 24 also, MP Garment Factory in Hlinethaya Township closed down due to the Covid-19 impact and inadequate order.

How to get the vaccine and how effective is it? » TechnoCodex