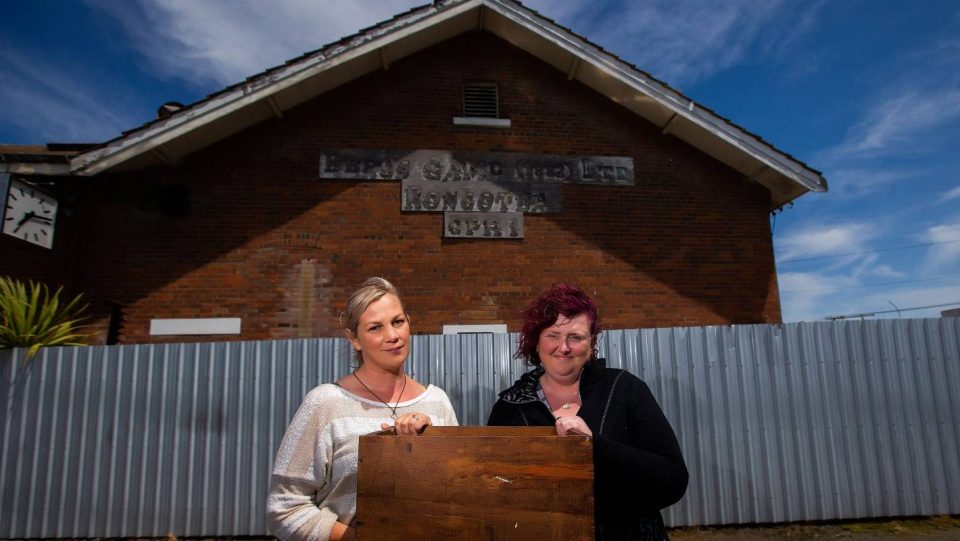 Rongotea residents Amanda Hodge and Susan Liverton, outside the old butter factory, organised to have a wooden butter box sent back to where it first came from.

A wooden box used in the early 1900s to export butter from a dairy factory in Manawatū, which appeared in England, has returned home.

Residents in Rongotea drummed up support to return the slice of history to the village after it was discovered earlier this year at an auction in Manchester.

One woman was so intrigued by the imprinted stamp she decided to buy it.

When she couldn’t find any relevant information on the internet, she messaged the village’s Facebook page. Susan Liverton and Amanda Hodge, who run the page, then appealed to their followers to help inform the new owner.

The box is stamped with “Rongotea Pure Creamery Butter New Zealand”, which opened 20 kilometres northwest of the region’s main city, Palmerston North, in 1893.

Initially a milk processing plant, it quickly began churning butter and, due to flourishing demand, opened another factory on the same site in 1911.

It closed in 1989, and the building is now privately owned and used to store machinery.

The woman offered to return the box to its hometown when Hodge and Liverton told her its history.

“She could have kept it, but she wanted us to have it,” Liverton said.

“As far as we know, it’s possibly the only box that remains from when the factory was exporting butter.”

The duo will put the box on display in the Rongotea Community Centre, along with a note from the woman who bought it and some photographs of when the factory was in operation.

The box, which is about 30 centimetres by 50cm, arrived home last week after three donation boxes and a business owner paid for it to be transported. It was also fumigated to kill any insects in the wood.

Hodge said she was feeding her baby in the middle of the night when she received the message.

Following their appeal, several people replied saying their parents or grandparents had worked at the factory.

It was discovered workers would imprint the company’s stamp on the butter with a rolling pin and that most of its product was exported to England.

Staff were loyal and spent most of their working life with the factory, and, in return, the company rented homes in the village for them.

Here are some new tools coming to protect the supply chain

Berlin Factory Could Be a Game Changer