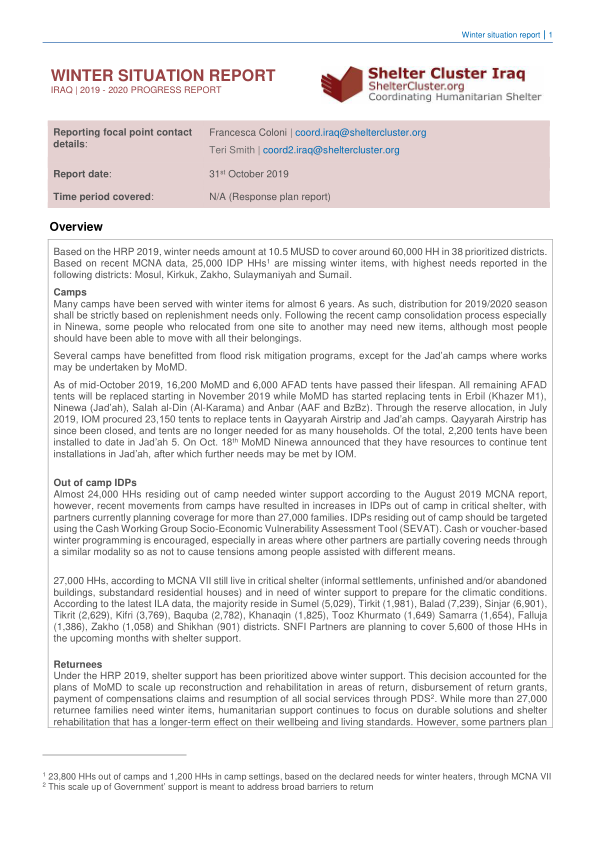 Many camps have been served with winter items for almost 6 years. As such, distribution for 2019/2020 season shall be strictly based on replenishment needs only. Following the recent camp consolidation process especially in Ninewa, some people who relocated from one site to another may need new items, although most people should have been able to move with all their belongings.

Several camps have benefitted from flood risk mitigation programs, except for the Jad’ah camps where works may be undertaken by MoMD.

As of mid-October 2019, 16,200 MoMD and 6,000 AFAD tents have passed their lifespan. All remaining AFAD tents will be replaced starting in November 2019 while MoMD has started replacing tents in Erbil (Khazer M1), Ninewa (Jad’ah), Salah al-Din (Al-Karama) and Anbar (AAF and BzBz). Through the reserve allocation, in July 2019, IOM procured 23,150 tents to replace tents in Qayyarah Airstrip and Jad’ah camps. Qayyarah Airstrip has since been closed, and tents are no longer needed for as many households. Of the total, 2,200 tents have been installed to date in Jad’ah 5. On Oct. 18th MoMD Ninewa announced that they have resources to continue tent installations in Jad’ah, after which further needs may be met by IOM.

Out of camp IDPs

Almost 24,000 HHs residing out of camp needed winter support according to the August 2019 MCNA report, however, recent movements from camps have resulted in increases in IDPs out of camp in critical shelter, with partners currently planning coverage for more than 27,000 families. IDPs residing out of camp should be targeted using the Cash Working Group Socio-Economic Vulnerability Assessment Tool (SEVAT). Cash or voucher-based winter programming is encouraged, especially in areas where other partners are partially covering needs through a similar modality so as not to cause tensions among people assisted with different means. 27,000 HHs, according to MCNA VII still live in critical shelter (informal settlements, unfinished and/or abandoned buildings, substandard residential houses) and in need of winter support to prepare for the climatic conditions.

Under the HRP 2019, shelter support has been prioritized above winter support. This decision accounted for the plans of MoMD to scale up reconstruction and rehabilitation in areas of return, disbursement of return grants, payment of compensations claims and resumption of all social services through PDS2 . While more than 27,000 returnee families need winter items, humanitarian support continues to focus on durable solutions and shelter rehabilitation that has a longer-term effect on their wellbeing and living standards. However, some partners plan to target returnees residing in critical shelter who are particularly vulnerable and exposed to severe weather conditions.

As in previous years, humanitarian Partners will count on the commitment of Ministry of Oil and MOMD to provide heating fuel (kerosene) in time to meet winter needs. Failing in this crucial area may push families into negative coping mechanisms (such as burning trash, as witnessed in previous years).
The SNFI Cluster will continue to advocate with the Government of Iraq to ensure that kerosene needs for vulnerable populations are met, as well as the provision of winter clothing and the replacement of those tents that are not providing anymore sufficient protection from climatic conditions.

How Parliamentarians can L.A.B.O.R. for disaster resilience – World