Business continues to improve at the local outlet mall. Tanger Factory Outlet Centers (NYSE:SKT) offered an encouraging financial update after Monday’s market close. The operator of 38 upscale outlet shopping centers came through with another month of positive cash flow in August, and it was enough to pay off its unsecured lines of credit.

Its properties are starting to retain tenants and, more importantly, attract customers. With funds from operations now positive — and likely to continue rising — it’s just a matter of time before the REIT resumes its once hefty quarterly distributions. 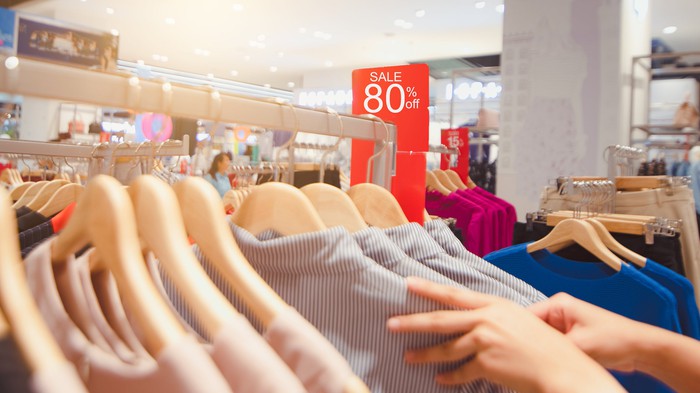 Shop until the yield pops

Tanger Factory Outlet Centers was doing fine — but not great — before the pandemic. Brick-and-mortar malls are struggling, and many retail concepts are going under. Tanger Factory Outlet Centers is tethered to its tenants, and some of its retail partners have filed for bankruptcy. The shift to e-commerce was already a problem, but the pandemic has accelerated the process.

The silver lining here is that Tanger is built for the new normal. There will always be retail brands looking for ways to move stuff that doesn’t sell through their full-priced channels. With money tight in the recession folks are funneling more of their spending Tanger’s way when they need an escape from home.

Monday afternoon’s update had a lot of positive data points. Open stores now represent 98% of its leased square footage, and they’re starting to do a better job of sending money to Tanger. Rent collections are up to 85% of billed rents in August, from 81% a month earlier. There are some empty storefronts that aren’t in that mix, but the consolidated portfolio’s occupancy rate was at a healthy 93.7% by the end of August. If it can get that back up to 95% by the end of the year it will be the 39th consecutive year Tanger has ended the year at that level or higher.

Shoppers are also returning to Tanger. Traffic levels have gone from 85% of year-ago levels in July to 89% through the past six weeks. It’s not a coincidence that tenants are starting to pay up with more shoppers strolling their aisles and likely ringing up more sales at the register.

Tanger had an impressive streak cut short earlier this year. It boosted its dividend every year since 1993 — a Dividend Aristocrat — before suspending its payouts in the springtime. If we go by the rate of its last regular dividend of $0.358 a share in April this would be a yield of 25.3% based on Monday’s close.

The REIT shares won’t be yielding that much anytime soon. Funds from operation clocked in at $0.10 a share for last month’s second-quarter results. Results will keep improving, and the payouts — at a much lower level than where we left off — will be back sooner rather than later. Tanger had $606.6 million in liquidity at the end of August, consisting mostly of the $600 million in lines of credit that it now has at its disposal.

We will probably never see Tanger yield north of 25% again, but that’s a good thing. By the time the fundamentals improve to support its earlier distributions the shares will likely be substantially higher. Today’s investors will win through capital appreciation and a resumed dividend that will grow over time. There are two ways to win here, and all investors have to do — like Tanger customers — is spot a bargain when they see it.

Menzies apologises for handling ‘turmoil’ at LHR: ‘we’re working on it’