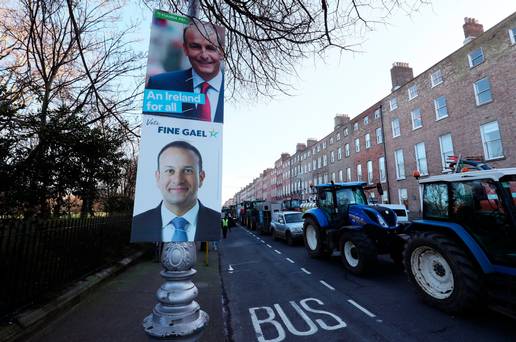 Pointy makes a physical box (€729 in Ireland) that connects a physical shop’s inventory to online discovery by customers.

It does this by sitting between the shop’s barcode scanner and point-of-sale system. It makes it a bit easier for physical shops – which don’t want to be caught up in managing the complexities of a website – to have an online presence.

It’s a simple idea, tried before. But it took co-founders Mark Cummins and Charles Bibby to make it work effectively. (In Cummins’ case, it’s the second time he’s sold a startup to Google, having seen Plink snapped up by the search giant in 2010.)

The Pointy box is now in situ in 15,000 shops. The US is its main market, with a presence in 1pc of all retailers there. Small to medium-sized shops are its speciality. A couple of months ago, it claimed to be in 10pc of all America’s pet stores, 9pc of toy stores, 5pc of off-licences, 5pc of hardware stores, 5pc of sports stores and 3pc of pharmacies.

That all adds up to ‘real-time availability information’ on more than 50 million items in those 15,000 physical retail stores.

Pointy’s installation growth would certainly have caught the attention of big online retailers and analytics companies. It claimed to have grown seven-fold in 18 months.

Some of that would have been helped along by the €16m in venture funding it received over the past few years. But funding only gets you so far.

What’s not clear is whether it was making a profit. It may have needed more funding to keep its expansion going. In that case, the founders may have thought it might be better to seek a long-term expansion via a new owner that is known for affording freedom and space, as well as potentially endless investment pockets. It’s also possible that tens of millions in a sale windfall might have had a say.

If you’re elected, have over 100,000 followers and have the ‘blue tick’ of verification, you can say more controversial things than if you’re a mere citizen, have no blue tick or are a politician with only a few thousand followers.

(‘Elected’ also means ‘appointed’, so a regulator, judge or senior civil servant might get away with going on a tear on Twitter if they felt like it.)

“There are certain cases where it may be in the public’s interest to have access to certain tweets, even if they would otherwise be in violation of our rules,” the company policy says.

This means you can threaten to bomb or attack another country or city, or otherwise engage in ‘sabre-rattling’ on a range of topics. It probably means a host of other things too.

Mostly, this privilege has been untested. There are only two elected officials in Ireland with more than 100,000 followers: Leo Varadkar and Gerry Adams.

If Varadkar (or Adams) threatened someone in a tweet, Twitter would “place it behind a notice that provides context about the violation and allows people to click through should they wish to see the content”, instead of taking it down.

That’s not something that Mary Lou McDonald, Brendan Howlin, Eamon Ryan or Martin would get away with under the platform’s rules.

It seems a bit arbitrary; 100,000 followers is a ‘big market’ metric. There are thousands of politicians in larger countries with over 100,000 followers. But because Ireland is a small market, there are only two.

One thing that Twitter’s rules are not designed to do is to police tone. Adjudicating what is or what is not acceptable in public discourse isn’t always straightforward in an electorate with divergent social and moral ideas.

Offence is often taken online. Twitter says it can’t do much about that. It also can’t avoid allowing a certain amount of dog-whistling, as unpleasant and disturbing as that sometimes can be.

“We focus on the language of reported tweets and do not attempt to determine all potential interpretations of the content or its intent,” it says.

This allows controversial minor figures on the fringes of political life to keep objectors at bay. Their tweets may suggest sinister undertones, but if they use sufficiently anaesthetised language, Twitter won’t take them down, regardless of how many people report them.

There are six grounds Twitter says it is much stricter on enforcing, even if they come from a protected account such as a verified elected official with over 100,000 followers. These are: posting private information; posting intimate photos without consent; child sexual exploitation; the promotion of self-harm; threats of violence; or the promotion of terrorism.

To date, neither Varadkar nor Adams has been adjudged to fall foul of any of these rules.

By itself, Twitter isn’t a decisive forum in the minds of Irish voters. Last week’s Ipsos MRBI usage figures showed it is still a shadow of Facebook’s dominance. But it can be influential in how discussion points are framed before making it on to other platforms, or into more traditional media.

It should be interesting to see if any politicians really test its limits.