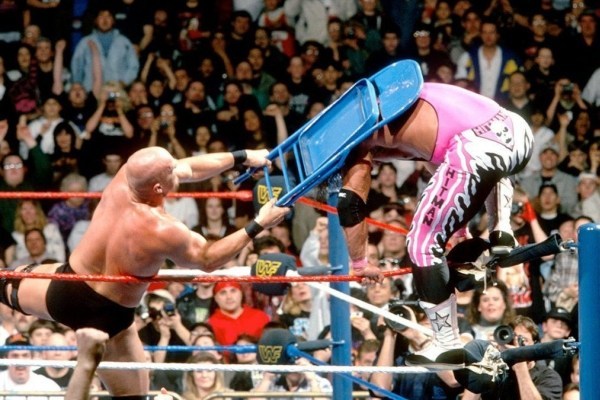 The dramatic principle Chekhov’s gun originated from its namesake Russian playwright and short-story writer Anton Chekhov in the 1880s. The theory is still brightly visible in a multitude of industries today, from literature and theatre to cinema and even pro wrestling. The last of which is the focus of this piece, as I will explore the use of Chekhov’s Gun in wrestling through various matches that show the concept in practice.

At risk of oversimplification, the principle boils down to the idea that (to quote a 1889 letter Chekhov wrote) “One must never place a loaded rifle on the stage if it isn’t going to go off. It’s wrong to make promises you don’t mean to keep.”

In wrestling, the principle is often embodied by a physical object (a table, chair or thumbtacks for example), meaning it is often perceived that the principle is merely set-up and pay-off. However, this is a wild simplification of the concept, as everything which is included must have meaning – and not be superfluous – if you are to follow the theory.

As I mentioned in my introduction, the principle is almost always embodied by a physical object when in a pro wrestling setting. This was evident at NJPW’s 2018 showpiece event, Wrestle Kingdom 12 in the Tokyo Dome, during the No DQ ‘Alpha vs Omega’ match.

In this match, the gun is demonstrated by both a chair and a table. Therefore, this match stands out from my other examples as it uses two objects, rather than one, to emphasise the concept.

First, the table. It was set-up at ringside during the chaotic opening minutes of the match, but wasn’t used until the 25 minute mark of the match. This “firing” of the “gun” was when Jericho crashed through the table. During the approximate 20 minutes between set-up and pay-off, we caught shots of the table on a couple of occasions – building tension before the table is put to use. This fulfils Chekhov’s gun because of the hefty importance it holds, which is built up and then delivered upon.

The fact that the table was set up and used at a very consequential point of the match means the “promise” of it being used as a weapon is kept.

Secondly, the chair is a clear employment of the theory as it is established in the early goings of the match (much like the table) and delivered upon at the match’s climax. It is wedged between ring ropes, and in front of a turnbuckle pad, promising it will be used as a weapon later in the match. Any weapon which is introduced into the ring must be used (whether successfully or unsuccessfully, as long as it carries meaning), otherwise don’t bother bringing it into focus.

The chair has significance as it is used by Jericho as a desperation move, while simultaneously serving as a call back to Jericho’s attack on Omega months prior. This achieves the aim of Chekhov’s gun as the chair is brought into play, and subsequently used in an impactful manner.

This match encapsulates the principle very well, as it brings into focus various elements which all have important meanings and impacts – delivering on the “promises” it makes to the audience.

Another example is the spectacular submission match from WrestleMania 13, between Bret Hart and Steve Austin. In what was a perfect piece of pro wrestling theatre, Chekhov’s Gun was incorporated through the use of the timekeeper’s ring bell as a weapon.

The ring bell was introduced by Bret Hart within the first 10 minutes of the match, with its payoff not being until the climax, slightly more than 12 minutes later.

After surviving relentless attacks to his knee, Austin proceeded to use cables from ringside to strangle Bret. This was when the ‘Hitman’ resorted to cracking Austin over the head with the aforementioned ring bell. The fact that Hart had no other choice but to use the ring bell speaks to the power Chekhov’s Gun has as a principle to shape a match around.

The bell was placed near the corner of the ring, so that it was visible, but not-overbearing. This meant that when Bret hit Austin with it, it was both surprising and completely logical within the structure of the match.

Chekhov’s Gun dictates that everything must be meaningful. As a whole, the match fulfils this as each moment carries purpose – notably Bret’s everpresent focus on Austin’s brace-ridden knee. Despite the Canadian’s focus wavering towards the skull of ‘Stone Cold’ when he is busted open by the guardrail at ringside, this is also purposeful as it leads into the ring bell shot.

Hart’s decisive Sharpshooter was the result of the constant attacks on his opponents already injured knee, but the use of the ring bell as a vehicle of drama in the match’s story was incredibly impactful due to it being the move that knocked Austin down (and into position for the decisive submission).

Chekhov’s gun doesn’t exactly take centre stage in this match, like it arguably does in my two previous examples, but its use is still vitally important to the occasion. In what was a late front-runner in the 2020 Match of the Year lists, Hiromu Takahashi battled El Desperado in the BOSJ final. The proverbial Chekhov’s gun was exposed turnbuckles.

The match took on a fiery, emotion driven storyline, which weaved its way throughout, serving to intensify the dramatic and charged encounter. Acting as a frame to this thrilling tournament final, the exposed turnbuckles were used as an impactful device in building drama.

When Desperado ripped off the corner pad, prior to the 5 minute point of the match, he immediately whipped Hiromu into it twice. This is in contrast with the two other matches, as the “gun” is used immediately after set-up, as well as at a consequential juncture in the match much later – the actual firing of the gun.

The exposed turnbuckles aren’t interacted with for long portions of the match, with the only two occurrences after the set-up being a tease at around 23 minutes in and the eventual pay-off itself.

The pay-off was teased when referee Red Shoes Uno was sandwiched between Hiromu Takahashi and the turnbuckles, allowing El Desperado to take advantage of the knocked down referee with a low blow to the ‘Time Bomb’.

When the climatic pay-off finally came (seconds before the 30 minute call), Desperado was plunged into the exposed turnbuckles with a bruising Death Valley Driver. This was the perfect firing of Chekhov’s gun, as we had seen the spot promised with the removal of the corner pad very early in the encounter.

Also, the hugely consequential nature of the move encases Chekhov’s principle, as its inclusion was completely meaningful and vitaly consequential as it led into Hiromu’s winning sequence. Chekhov demands that any redundant elements be stripped away, so in the case of a pro-wrestling match, it results in a match which is full of meaning.

A meaningful wrestling match is the best type of wrestling match, therefore Chekhov’s principle allows wrestlers to explore a structure which can foster great matches when done correctly. These three examples are all clever (and successful) uses of Chekhov’s gun, which forcefully show the importance it has in the pro wrestling industry.

Some of the coverage you find on Cultured Vultures contains affiliate links, which provide us with small commissions based on purchases made from visiting our site. We cover gaming news, movie reviews, wrestling and much more.

Boris Johnson is asking businesses to take a big risk. Few will do so – New Statesman