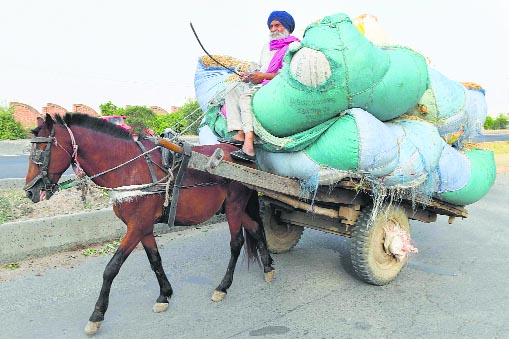 Have you ever wondered why India’s big businesses are suddenly so keen on farming? The answer is very simple. They have already exhausted all other options of making mega profits. After all, we know that farm income in India has not kept pace with inflation for at least the past two decades now. So, in real terms, farmers earn less now than they did in the previous millennium. Yet, big corporates find the agriculture sector attractive enough to have lobbied for these new farm laws.

Darbari economists with their fairytale theories will tell you that corporates entering the farm is a win-win for all. Two banal concepts that they like to use here are ‘economies of scale’ and ‘backward and forward integration’.

The fable of the free market goes something like this: Big companies will bring low-cost finance, they will be able to procure seeds, fertilisers and pesticides at discounted prices because they’ll order it in bulk, they will bring new farming technologies to improve yields, they will reduce wastage at harvest, they will set up cold-chain systems to quickly transport grains, vegetables and fruits and they will even sell the produce at lower prices to the final consumer, in their own retail chains, by removing the villainous middlemen.

Such balderdash is forgivable if spouted by your retired uncle in the family WhatsApp group. When mainstream economists and celebrated commentators regurgitate it, one has to wonder about their real intentions. That’s because it is impossible to believe that they are unaware of the facts of corporatisation of agriculture in other parts of the world. Everywhere, without exception, it has created a few agri-giants who have made massive profits, while farmers have become poorer and food has become more expensive.

The real reason why corporates want to enter the farm sector and why their handmaidens in academia and the media are batting for the new farm laws lies in the recent history of our economy. India has always had monopolies, where a few business houses controlled all organised industries. It even entered the popular lexicon where someone who had the airs of being rich would be ridiculed as one “who thinks they are some Tata-Birla.”

From the late 1960s, this came under restrictions by the state when Indira Gandhi decided that the only way she could take on the ‘syndicate’ of entrenched Congress leaders, was to take a left turn. From the mid-1980s, especially after Rajiv Gandhi became PM, many hurdles placed on big corporate houses were gradually removed. The Rao-Manmohan reforms of the 90s lifted what little remained.

The liberalisation years did give some opportunity for new entrepreneurs to compete with established business houses. This was especially true in export-oriented industries and in the new ‘sunrise’ sectors like IT and telecom. Things looked even better for new businesses in the mid-2000s. Easy finance during UPA-1, new political alignments, policy focus on big-ticket infrastructure projects, and the real estate boom opened the door for the emergence of new companies.

All of these credit-fuelled businesses collapsed when the global financial bubble burst in 2008. Many companies, which had investors chasing them in the mid-2000s, became bankrupt, their market capitalisation dropping to a fraction of what it was in 2007.

Every industry witnessed a process of consolidation, where a few big companies, usually those that were already entrenched, gradually bought over others. Some sectors, such as power, were entirely abandoned, leaving it to the government and public sector banks to deal with the mess created by private capital.

Since the Modi government has come to power, monopolies have become even more entrenched. This was partly a legacy of what UPA-2 had left behind. When a credit bubble bursts, it crushes everyone except businesses that have deep pockets, cash reserves and political heft. The Modi government’s initial attempt to clean up the bad loan mess only made things worse for those with big loans, and ended up strengthening big businesses.

However, the slowdown in the rest of the economy and the government’s terrible performance on jobs has caused the mother of all demand problems. So, corporates are making money by cutting costs, sacking people and reducing investments. They are selling less, but spending even lesser. The result is that big companies are spending their profits on buying back shares and rewarding shareholders with bigger dividends. This is the exact opposite of what growing economies need. It is also a vicious cycle which can only lead to increasing contraction. At some point, there will be no buyers left to sell things to and there will be no profits to be made.

In such a situation, monopoly capital has only one place to turn to. And that is agriculture, which is the only sector that is entirely run by small ‘private entrepreneurs’. After all, that is exactly what farmers are. There is a lot of money to be made here through consolidation. Big businesses can indeed take over the share of income made by intermediaries — traders, transporters, wholesalers and retailers.

There are literally millions of small private entrepreneurs in agriculture who can be pushed aside and replaced by big agricultural monopolies. It is also one sector where demand is permanent, especially if your aim is to sell mostly to the urban middle classes. Urban consumers already pay for margins earned by the entire chain of intermediaries who stand between the farm and their kitchen. It is of no consequence to them whether the profits are being made by a million people or one big company.

For big business, agriculture is the last big sector that offers the opportunity for consolidation. It is also the only space where there is a possibility of growth. That is why they are so keen to see the farm laws stay. And that is what India’s farmers have to fight.