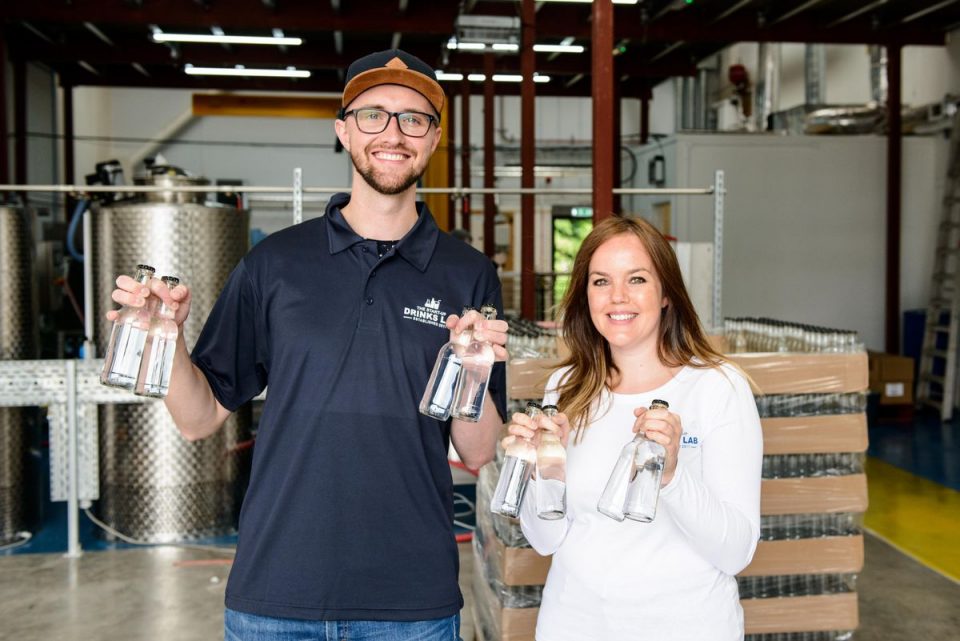 After working 15 years in marketing for some of the world’s largest beverage and spirit brands, Glasgow-based entrepreneur Hannah Fisher was ready to strike out with a product of her own. The only issue? No one in Scotland would bottle it. Through a series of serendipitous meetings and years of entrepreneurial perseverance, Fisher not only brought her beverage to market this summer (in the midst of a global pandemic, months after having her first child) she built the factory to do it. Today, in addition to being the visionary behind Tongue in Peat, she’s the co-founder of The Start-Up Drinks Lab, the fastest growing beverage innovation manufacturer in the U.K.

When I met Fisher a few months ago, I was instantly struck by her story. The barrier for entry seemed nearly impossible in the early years of her business yet she never gave up, and has in turn co-created something even larger and more impactful than she originally imagined. The early idea for using peat smoke (peat being a natural fuel found in Scotland and often used to influence the flavor of peated Scottish whiskies) to enhance tomato juice originally came to her in 2015. It could be the ultimate mixer for a Bloody Mary, and no one had attempted it. Less than a year later she was testing products with local farmers and peat suppliers and finalized her recipe in summer 2016. All seemed on-track until it came time to meet with the bottlers, and no one in the U.K. wanted to run small batches of a craft product with two high-maintenance ingredients. Tomato juice is a pain, they said. Peat will smoke up the lines. The order is too small. We won’t do it, and good luck finding someone who will.

Fisher didn’t want to move manufacturing out of Scotland, jeopardize the quality of the product, or lose the powerful “Made in Scotland” marketing angle. At this point she had left her full-time job in spirits marketing and there was no turning back – she had to figure out a way to bring Tongue in Peat to life. Enter Craig Strachan, an accountant turned entrepreneur, whom she met by chance through a Scottish business incubator, Entrepreneurial Spark. Strachan also had a craft beverage in the marketplace and had encountered the same challenges as Fisher when it came to bottling and distribution. Together they spotted a gap in the market that they were uniquely positioned to fill. With Craig bringing his finance and operations experience to the table and Hannah leading the way on marketing and innovation, they came up with a solution that would not only help both of their brands but could potentially become a game-changer for all small-batch craft beverages in the U.K.

Just after teaming up, they learned about a entrepreneurial competition sponsored by the Scottish government and quickly put together a business plan to enter. The contest was specifically looking for Scottish businesses to collaborate with one another to solve a problem, and to their surprise, Strachan and Fisher won. This win gave them access to £60,000 of funding to help get their new consortium co-operative off the ground, as well as entrepreneurial mentorship, executive guidance, and access to potential equity investors. They launched The Start-Up Drinks Lab together in 2017 with the aim of building an agency and manufacturing plant that could deliver a wide variety of craft beverages, alcoholic and non-alcoholic (a rapidly growing market) alike. Their custom kit would be capable of handling just about any ingredient. It would take some time, but eventually Fisher would be able to bring her vision of peat-smoked tomato juice to life in a factory she helped design and build.

The Lab opened their bottling plant and innovation center in Port Glasgow in 2018, and quickly made a name for themselves as the only full-service agency and manufacturer that can take a concept to shelf in 90 days. They are capable of handling recipe development, ingredient sourcing, trial production and testing, brand development, and project management for individual clients, start-ups, and major companies. Some of the largest beverage brands in the world are now outsourcing their yearly innovation and R&D directly to the Lab; a full-circle moment for Fisher. In 2019 they were recognized as the Food and Drink Company of the Year at the prestigious Made In Scotland awards.

Strachan and Fisher both told me how fortunate they feel to have a business partner that brings complimentary but different skillsets to the table. While they clearly both possess a business acumen, Hannah is the brand developer and risk taker where Craig is the financial planner and prudent operator. Both say this balance, coupled with an enthusiasm for their joint vision, has been key to their success. Strachan told me that building a viable and self-sustaining business in just two years is what he’s most proud of. You can tell their mutual respect and shared tenacity makes this partnership work.

Together the co-founders have been so successful at scaling the business that Fisher could finally, after five years of development, become her own client and get Tongue in Peat into production in early 2020. Then, the pandemic struck, throwing yet another obstacle in the path. Bottling and distribution became more difficult – and time consuming – overnight. Fisher also gave birth to her first child the week lockdown began, bringing a new prism and perspective to her life and work. Although it seemed crazy to some, she forged ahead with the plan to launch Tongue in Peat this summer: pandemic, new motherhood, and all.

In fact, it was a delivery of Tongue in Peat and a hand-written note from Hannah in August that connected us. My father had seen an ad for the product on a whisky website and decided on a whim to send me some (thanks, Dad). A surprise box from Scotland is always a good thing around here! I loved the product, the personal touch (never underestimate the power of a hand-written note), and immediately went looking for the story behind it. A few weeks later I was on the phone with Hannah discussing entrepreneurship, motherhood, whisky, and her journey building the lab. I made a fantastic Bloody Mary and a new friend. Only a few months into circulation, Fisher has already picked up a coveted Great Taste award for Tongue in Peat and is off to a roaring start.

COVID-19 continues to impact our world in macro and micro ways, but progress and business continue on. I don’t know anyone who hasn’t had to pivot their life or work and make the best of it right now. Fisher’s determination, patience, and steady forward momentum remind me that anything worth doing takes time, and you can still succeed even when the world seems upside (or locked) down. The path may be longer, it may lead you in a direction you didn’t anticipate, but where there’s a will, there’s often a way. If the pandemic has put your plans on hold you’re not alone, but as Hannah Fisher proves, as long as you don’t give up, anything is possible.

These teachers work in a future factory