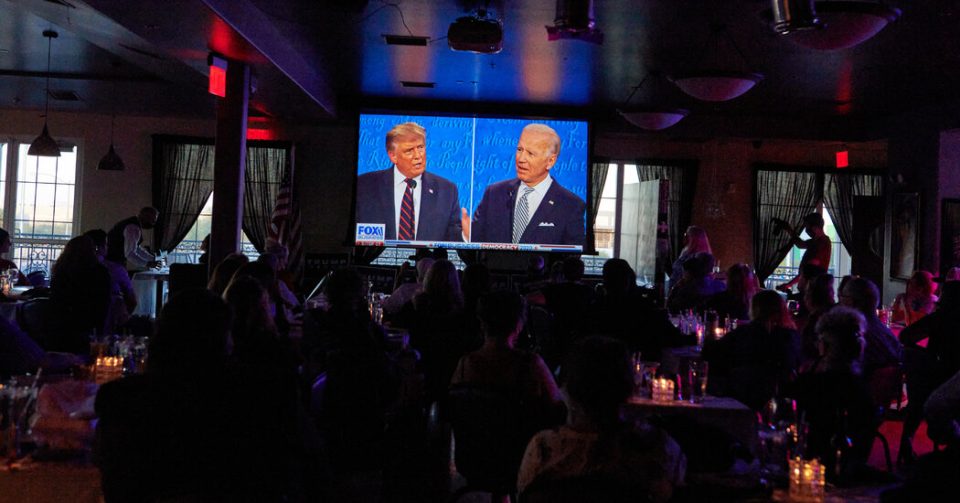 The recent Times/Siena poll found that 50 percent of likely voters said they were actually better off than four years ago, while just a third said they were doing worse. But when asked about the country at large, 55 percent said things had grown worse.

When protests against racial injustice began to rage after the police killings of George Floyd and Breonna Taylor in the spring, the presidential candidates staked out sharply divergent positions. Mr. Biden resisted calls to “defund the police,” but he emphasized the need for sweeping police reform. Speaking at Mr. Floyd’s funeral, he declared, “Now is the time for racial justice.”

Mr. Trump targeted his ire instead at protesters, broadly painting them as lawless and violent. He railed against the desecration of monuments, issued an executive order banning anti-bias training for government contractors, and questioned the existence of systemic racism.

This message resonates with the president’s base. During Mr. Trump’s term, Republicans have grown more likely to say that it is white people who face bias, according to polling from the Public Religion Research Institute: 57 percent of Republicans said white people faced a lot of discrimination in the institute’s 2020 American Values Survey. Members of Mr. Trump’s party are now more likely to say that white people or Christians face a great deal of discrimination than they are to say that about Black people, the survey found.

Yet for the rest of Americans — including white voters beyond the Republican Party — concern about anti-Black discrimination hit a record high this year. Partly as a result, voters overwhelmingly pick Mr. Biden as the better option to handle racial issues. In an ABC News/Ipsos poll last month, voters said Mr. Biden would do a better job handling issues of racial discrimination than Mr. Trump would by roughly two to one.

Mr. Biden’s advantage holds even when voters are asked pointedly about “law and order,” a term Mr. Trump favors. And it holds even in heavily white states, such as Wisconsin, where support for the Black Lives Matter movement has dipped since the spring. In a Marquette Law School poll of Wisconsin this month, just 46 percent of voters expressed a positive view of Black Lives Matter — down from 59 percent in June — but even fewer, 37 percent, said they liked how Mr. Trump had handled the protests.