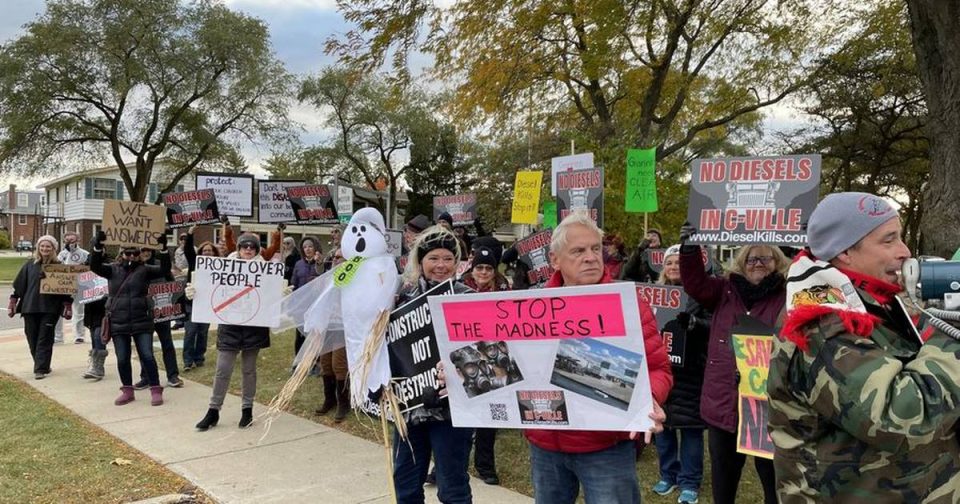 “We want people to be aware,” said Tom French, one of the protest organizers. “We are putting the village board on notice that we’re not going to stop.”

The residents oppose the potential development of nearly 90 acres at the southeast corner of Randall and Binnie roads in an unincorporated area between Carpentersville and West Dundee.

Another protest is planned at 1 p.m. Saturday at Randall and Binnie roads.

Though no formal plans have been submitted, a concept plan presented to village officials in September showed plans to build three warehouses totaling 1 million square feet on the property. The developer, Missouri-based U.S. Capital Development, also included parking for up to 300 trucks in the concept plan.

More than 200 residents attended the September meeting and have continued to protest the potential development.

Protesters Tuesday reiterated concerns that a warehouse development would bring more truck traffic to an already busy Randall Road. Others expressed concern about the potential noise and pollution from more trucks.

A similar proposal for development on the property last year did not make it to West Dundee trustees. Village officials declined to take it to trustees for review, saying the proposal did not fit with the surrounding retail and residential uses.

“It backs up to homes,” said Michelle Kingsbury, who lives off Binnie Road. “It’s not a good use for the property.”

Carpentersville officials declined to comment on Tuesday’s protest. But they refuted claims that a Tuesday village board meeting was canceled because of the protest.

Village President John Skillman said the meeting was canceled because he and another village board member couldn’t attend.

Village Manager Eric Johnson added there weren’t any items on the agenda that could not wait until the next board meeting. A plan commission meeting scheduled for Thursday also was canceled due to a lack of agenda items, Johnson said.

“We just reiterate that nothing has been filed and no decisions have been made,” Johnson said Tuesday, referring to the potential development.

Skillman also said he does not expect any formal plans to be submitted until after the new year.

Bajaj to Set Up Rs. 300-Crore EV Manufacturing Facility in Pune, to Roll Out Vehicles by June 2022

The Warehouse sells off remaining Easter eggs for 1 cent