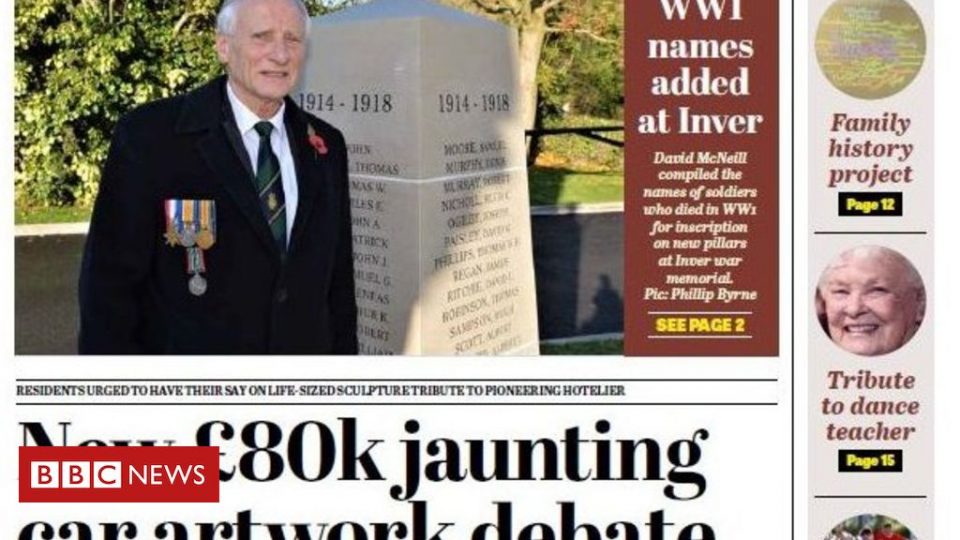 The prime minister’s visit to a crisp factory, a planning battle in County Down and a photograph of former unionist leader Sir James Craig all make the headlines in Northern Ireland’s weekly newspapers.

Boris Johnson’s visit to the Tayto factory in Tandragee, County Armagh, features on the front page of the Ulster Gazette.

It says Mr Johnson “got hands on with potatoes, sampled some of the snacks and was boxing clever in the packing area”.

Claims of an “anti-Armagh agenda” have also been splashed across the newspaper.

Councillors backed a report that suggested their committee meetings should no longer be held in the Palace building in Armagh city.

Instead they will be relocated to the Craigavon Civic Centre.

The Palace building will become the primary venue for for civic receptions “where possible”.

The Newry Democrat has splashed the headline “City future at stake” across its front page.

The trade bodies Retail Northern Ireland, Newry Chamber of Commerce and Newry Business Improvement District (BID) have urged the council to reject an application for a new retail park.

The proposal, which developer Damolly Developments has claimed will create more than 1,000 jobs, is for the regeneration of a derelict former customs and excise yard in Newry.

Groups opposed to the development said the retail park would compete with Newry’s city centre.

Elsewhere, the Larne Times reports that plans for an £80,000 public art piece celebrating the town’s tourism heritage have “sparked a lively debate that looks set to gather momentum” on Saturday.

A sculptor has been commissioned to create the piece, which will acknowledge the contribution of Henry McNeill, who brought visitors to the area from Scotland in the 1800s.

It says Mid and East Antrim Council is providing £8,000 with £72,000 secured from Stormont’s Department for Communities for the project, which is expected to be located at the junction of Pound Street and the Roddens.

The newspaper says some people have taken to social media with alternative suggestions of where the sculpture of a jaunting car with horse and driver should be displayed.

Residents have been invited to share their views on the final stages of the design at Larne Museum on Saturday.

Is it too early to talk about Christmas?

Not for the children in Lisnagelvin Primary School in Londonderry.

The Londonderry Sentinel pictures pupils from the school on their front page who are collecting Christmas gifts for children in eastern Europe.

The newspaper also reports on what a historical researcher believes is the earliest photograph of Northern Ireland’s first prime minister before he was captured in the Boer War.

The image of Sir James Craig inspecting horses was found in correspondence from South Africa written by George Moody, a soldier who was friends with the then future Lord Craigavon.

He made the discovery at the Public Record Office of Northern Ireland (PRONI) while updating a book on the Plantation of Ulster.

The Fermanagh Herald leads with the headline “Hopes of new leads in Lunney manhunt”.

In September, Quinn Industrial Holdings (QIH) executive and Kevin Lunney was kidnapped outside his home in Kinawley and attacked before being dumped on a road in the Republic of Ireland.

The father of six had his leg broken, was slashed with a knife and doused with bleach in a two-and-a-half hour ordeal.

The newspaper reports that directors at QIH remain on a “heightened state of alert” in spite the death of a prime suspect in the case.

Cyril McGuinness, 54, is thought to have suffered a heart attack as police searched his Derbyshire home last week.

A spokesperson for QIH told the Herald that there was “nothing to indicate any change in this paymaster-driven campaign of terror and intimidation”.

The Herald also reports that Fermanagh patients needing new hip and knee replacements are having to wait up to five years for an outpatient appointment.

The Western Health Trust’s latest report into orthopaedic services revealed that the longest waiting times for orthopaedic outpatient services had jumped from 26 weeks to 271 weeks since 2007.

The report noted the increased waiting times are affecting patients in several ways, “such as impacting on their employment and relationships as well as leading to an increase in opiate addiction”.

Finally, the Ulster Herald reports on its front page that nearly £85,000 has been raised in memory of father-of-three Barry McQuaid, from Dromore in County Tyrone, who was killed in a work accident in February last year.

The total was raised during a charity event in Irvinestown.

The newspaper says the money will be donated towards Tummery Primary School, which is attended by Mr McQuaid’s children, and Air Ambulance NI.

Rivian cuts 6% of workforce; Illinois factory will not be impacted