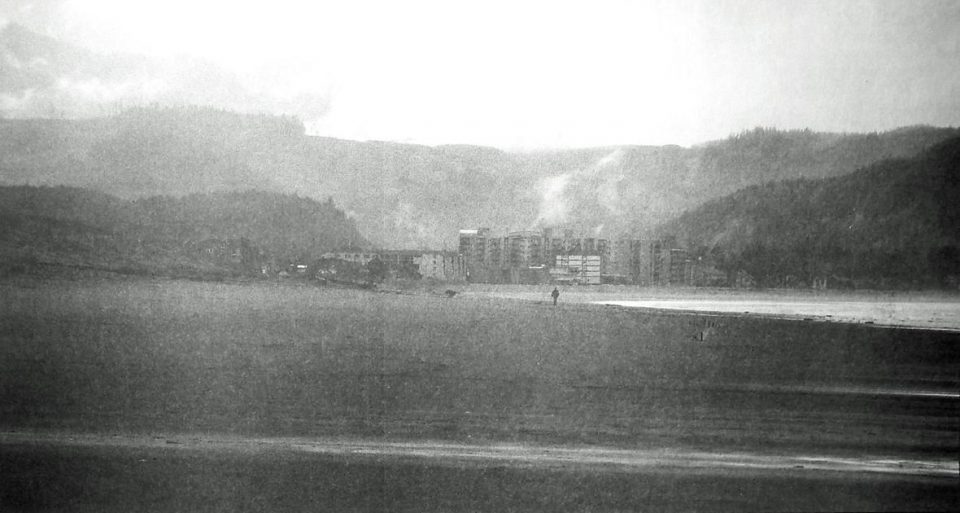 His family jokes that Carl Abraham spends more time at the trolley barn than anywhere else. But it’s not much of an exaggeration. And keeping the Astoria Riverfront Trolley up and running is just one of the retired optician’s many volunteer efforts.

On Saturday night, Abraham’s lifetime of volunteer service was recognized with a 2009 George Award from the Astoria-Warrenton Area Chamber of Commerce at the organization’s 137th annual awards banquet. The other recipient of the George Award was Eric Paulson, owner of Lektro, the Warrenton-based company that manufactures electronic aircraft tugs and ships them all over the country and the world.

A large bronze fountain that once graced Shively Park has been rescued from obscurity to become a star of Astoria’s Bicentennial celebration. The city will be 200 years old on April 12, 2011.

At Monday’s meeting, the Astoria City Council gave its stamp of approval to the bicentennial committee’s plans to refurbish the fountain as a legacy project. The council also endorsed a long list of events presented by committee leaders McAndrew Burns of the Clatsop County Historical Society and Paulette McCoy, starting with planting 200 trees around the city on Earth Day this year.

Highlights of the 2011 calendar include an opening event and downtown birthday celebration on May 21, 2011; a Bicentennial Ball on Aug. 13, 2011, during the Astoria Regatta with John Jacob Astor III as the honored guest; and Astoria Super Homecoming Sept. 14 to 18, 2011.

California brown pelicans are begging for food on the Oregon Coast rather than migrating south to breeding grounds.

The Wildlife Center of the North Coast continues to receive three brown pelicans a day suffering from starvation or other ailments.

Director Sharnelle Fee said the center is doing necropsies on all dead pelicans that are brought in. “All of the birds are highly emaciated and some have inappropriate food in their stomach – i.e. chicken bones (with no meat), bread,” she said.

She warned residents not to feed the birds.

Pelicans have very specific diets and cannot process or receive nutrients from food items outside of their diet, she said. Large bones may puncture delicate internal organs and lead to accelerated death of the bird.

Around 20 people attended a public meeting of the new group Clatsop Residents against Walmart Wednesday.

The group sent out 350 letters to local businesses soliciting donations in November, and has made enough to distribute 2,244 copies of the documentary “Walmart: The High Cost of Low Price” to households in the Warrenton and Hammond area Feb. 6 and 7.

Members of the West Coast Trollers Association have passed resolutions backing strict regulations on ocean oil spillage and asking representation of the fishing industry on nuclear site committees in Oregon and Washington state.

The ocean fishermen, who met in Astoria Saturday, resolved that tough laws on oil spillage were necessary to protect the ecology of the Northwest.

The group wants the fishing industry to have a say in picking sites of nuclear power plants in the two states and insure that cooling systems at such plants are efficient and that some funds are available to do fish hatchery work or carry on other activities affected by nuclear facilities.

Clatsop County went over the normal January rainfall total at midnight, according to the airport weather station. Normal for January is 11.71 inches. Up to 10 a.m. today a total of 13.33 inches had been measured.

The City of Astoria’s official 1970 population will be influenced by how many ships with American crewmen are in port.

George Blessing, a Department of Commerce official, told Astoria Kiwanians Tuesday that any Americans on board ships in Astoria at the time of the census-taking will be included in the city’s population.

He said the same goes for persons from other cities or states who are attending Clatsop College at the time of the national nose count. By the same token, Astorians attending college elsewhere will be counted as residents of those other cities.

Klep said the craft, complete with engine and gear, will remain in storage either in the boathouse or elsewhere until a planned maritime museum structure at the 17th St. waterfront park in Astoria is erected.

The structure will house such large exhibits as the wooden self-righting self-baling motor lifeboat. Klep suggested the craft might be sunk in a pit to the waterline for display.

Port of Astoria along with other Columbia River ports will benefit from an Interstate Commerce Commission decision killing the proposed Roselia grain freight rate that would have diverted massive tonnage of grain from eastern Washington to Seattle and Tacoma, according to C.E. Hodges, Astoria port manager.

Astoria will join other cities of the nation in the week Feb. 5 to Feb. 10 on a campaign to collect discarded clothing for shipment to the Russian people, it was announced today by Neil Morfitt, salvage chairman.

A Senate bill providing for equal pay for men and women working at the same job was strongly opposed by employers’ representatives at the Senate labor and industries committee hearing Friday.

Declaring that “this law does not belong on the statute books,” Gunther Krause, attorney for the Portland Waterfront Employers Association, said that the bill proposed to create a “penal statute” to control matter which would be much better handled by labor-employer negotiation, and that the bill, if made into law, would involve employers in endless lawsuits.

HEADQUARTERS 41st DIVISION, Far Pacific — Tech. Sgt. James L. Hope Jr. of Astoria has been awarded the bronze star medal for personal valor and a deep-seated devotion to duty on the field of battle.

The Astoria Marine Construction company’s YP-623, a refrigerated tuna clipper- type naval vessel built for inter-island freight traffic in the Pacific, was launched from the company’s Lewis and Clark River yards at noon today, after christening by Mrs. Julia Strand, wife of the vessel’s commanding officer.

The YP-623 is the largest ship yet built at the marine construction company, being shorter than the minesweepers, but also being of considerably greater tonnage.

Joseph M. Dyer, president of the company, complimented his working force on production increases during the last month, which he described as outstanding.

The game committee of the house today proposed the creation of a small game reserve in Clatsop County. Under the provisions of the bill, the reserve would include a state park between Cannon Beach and Seaside.

The measure is chiefly for the protection of elk, according to the chairman of the game committee.

Absence of sizable epidemics in Clatsop County during 1944 is indicated in the annual report of Dr. Dorothea H. Scoville, county health officer, which shows that the number of communicable diseases reported in this county during 1944 was 545 as compared with 744 in 1942.

Dr. Scoville said that less measles, mumps and chicken pox accounted for the difference. Records show no heavy run of influenza, although the doctor pointed out that physicians often fail to report such cases.

Is the supply chain ready for blockchain? Not yet, says Gartner

The Best Fund Companies and Their Ratings

Latest Job Listings In And Around Buckhead