Water has been a fundamental pillar of civilization since antiquity, and access to clean water is a basic universal right to be enjoyed by us all. As it is our most vital resource, we each have a moral responsibility to see that everyone has access to it. But, what occurs when access to clean water is sold off and exploited? The result is lower quality and a threat to public health in the name of easy profit.

In this day of public/private partnerships (PPP), “contracting out” and corporatization of many public services, our water supply and delivery systems have been no less a target of large private corporations than our air waves, our beaches and our transportation services. But loss of our water resources and delivery systems might well be the most disastrous for the public.

PPPs have been highly controversial as funding tools, largely over concerns that public return on investment is lower than returns for the private investor. No oversight, lack of transparency, and increased charges passed onto consumers spell a bad deal for communities who’s local governments decide to enter into these partnerships.

You see, most people do not think of the politics behind water while they drink or gulp it down with great satisfaction. However, many people (mainly low-income communities of color) are all too aware of yellow to brown stinky water because water companies have been allowed to sell said water. For many of them the Wateria has become their solution to the human right to water.

Look no further than LA’s Central Basin to find a water battle which may gravely impact 2.4 million people from 24 cities. The drama includes public officials holding meetings that discourage public participation on matters of the privatization of their very own water supply and debate around how officials could allow for a deal so detrimental to the health of the citizens they’ve sworn to protect?

I spoke with community leader, Martha Camacho Rodriguez of Downey to get a sense of how defunct democracy is putting people’s basic rights to clean water at risk.

Martha Camacho-Rodriguez is a board member for the Central Basin Municipal Water District, Division 1, which includes Bell Gardens, Downey, Montebello, Pico Rivera, West Whittier-Los Nietos, and unincorporated areas of Los Angeles County. She approached us with this story because access to clean water is more important than ever. Yet, it’s not commonly known that there are 43 contaminated wells in the Central Basin Service area. 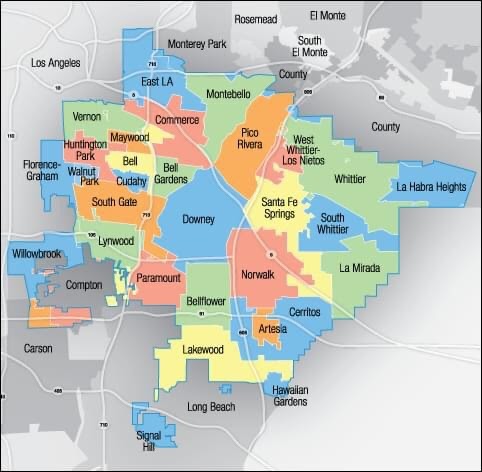 Since 1954, Central Basin MWD has been a member agency of the Metropolitan Water District (MWD) with 2 appointed board member seats. MWD is the water wholesaler for Southern California providing the region with imported water from the Colorado River and the San Joaquin Delta in Northern California.

As a wholesaler of this water, it’s function is to enforce it’s purveyors to be compliant in what is considered healthy and ethical. Since January this year, all water agencies are required by law to inform the public on toxicity levels such as lead in the water they consume. “Some politicians want to create laws based on lies. Elected officials want to write bills to change numbers on toxicity,” Camacho-Rodriguez says.

At CBMWD, Government official proceedings have been cancelled and/or had purveyors walk off the dias, preventing a meeting from taking place to conduct the business of CBMWD on behalf of the residents within its service area. With public water on the verge of becoming privatized by the city through legislation, it seems the lure of privatization outweighs community health and public participation.

If You Own Ballard Power Systems (BLDP) Stock, Should You Sell It Now?