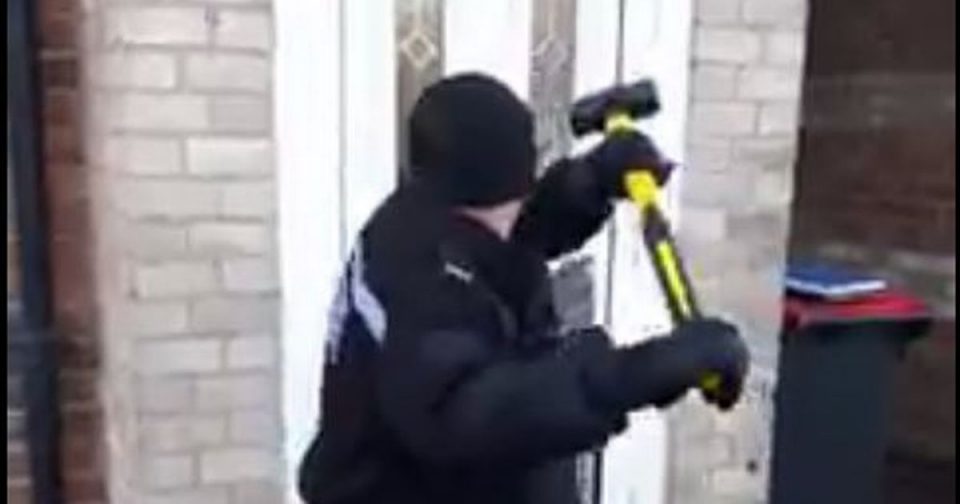 This is the moment a police officer batters down the door to a home that was being used as a cannabis factory.

The door is completely smashed out of its frame as the officer uses a sledge hammer to get inside.

The drugs raid was conducted at the property on Versey Close in Water Orton on January 5.

Officers found the home empty of plants – but discovered evidence that the haul of cannabis inside had recently been harvested.

No arrests have been made yet, but enquiries are ongoing.

Atherstone and Coleshill Police posted the video on Facebook.

The post read: “Officers conducted a drugs warrant in Water Orton this afternoon. The property was being used as a cannabis factory with the electricity also being illegally abstracted. Officers were required to force entry after the landlord could not be contacted and unsurprisingly no one was answering the door. Enquires are on going.”

Want a free daily bulletin – with the latest crime news from Coventry and Warwickshire direct to your inbox for free?

All you need to do is sign up here for emails that come out twice a day, at lunchtime and in the evening, with the latest news, what’s on and sport.

A spokesman said: “The warrant was executed at 14.07 on January 5 in Versey Close.

“The warrant was executed under the misuse of drugs act.

“Evidence was found of a cannabis factory but it had been harvested. No arrests have been made at the moment.”

Anyone with information that could help with enquiries can call Warwickshire Police on 101 quoting incident 167 of 5 January 2021.

Alternatively, information can be provided anonymously to the independent charity Crimestoppers on 0800 555 111.

The Cheesecake Factory ‘Timeless Classics’ Menu: What Made the Menu?