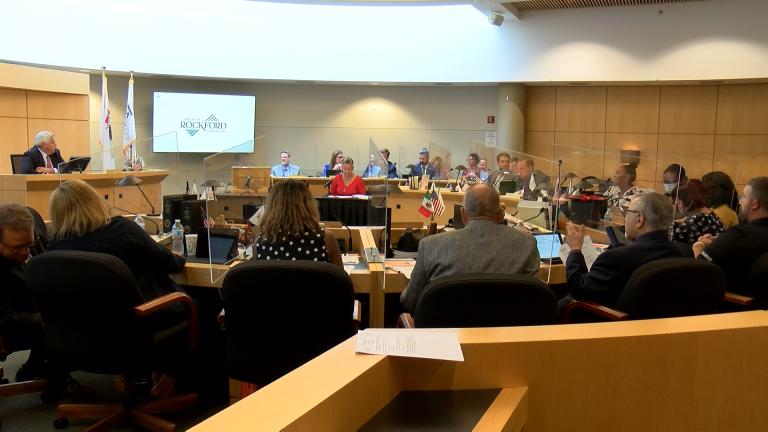 ROCKFORD (WREX) — A variety of topics were covered by Rockford City Council on Monday.

One of the items involved the old watch factory on South Madison Street. On Monday, the Finance and Personnel Committee rejected a bid on replacing the factory’s roof. The city has previously gotten grant money to help clean up the site for so it can be put up for sale.

According to the agenda for the meeting, one bid was received by J & F Chiatello Construction, Inc. The company included two separate prices for their bid, one at $54,476.75 and another at $78,585. The higher of the two prices was meant to reflect additional costs for the disposal of wood shingles and roof decking materials. The company told the city that they could not do the work for their original bid of $54,476.75.

With the rejection approved, the city will be taking new bids immediately. J & F Chiatello Construction, Inc., can make another bid.

Another issue involved the proposed apartment complex on Garrett Lane. A week after city council sent back a special use permit back to the Code & Regulation Committee, the committee denied the permit. The facility would be located in the 6600 block of Garrett Lane and include an assisted living center with a memory care unit.

Some alderman have said residents wanted something smaller and don’t want zoning changed on the property complex. The site planner recently shrunk the size of the proposed building from four stories to three and the number of apartments from 207 to 178.

Meanwhile, the Planning & Development Committee approved money to fund low-income housing. Zion Development Corporation, which owns the Longwood Garden Apartment building, wanted $800,000 from the federal government to renovate the building on the corner of Longwood and State streets.. If the funding is approved by city council, the funds would come from federal money that the city already receives. The entire project would cost $15.8 million.

Finally, the city council approved going after its fair share of money in the settlement with Purdue Pharma. On Thursday, the Winnebago County Board made the same approval. The two groups are part of thousands of governments to sue the pharmaceutical company over causing the opioid epidemic. The company filed for bankruptcy after seeing the number of lawsuits brought forward. City of Rockford Legal Director Nicholas Meyer says money the city gets would go toward addressing the opioid crisis in the region.

“We didn’t do this for the money,” said Rockford Mayor Tom McNamara. “What we did this for was to really change the way these large corporations do business and provide better education, better awareness to citizens.”

Meyer believes that a plan should be approved later in 2021 before it is determined how much money each group in the lawsuit gets. Rockford City Council has its next regular meeting on Monday, July 19 at 5:30 p.m.

How to factory reset an Apple Watch