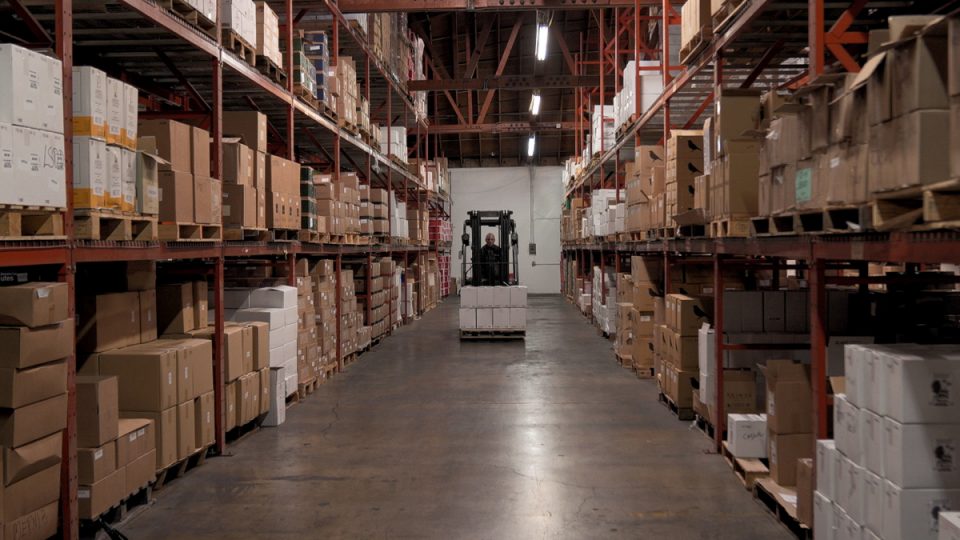 Online shopping has been booming in this COVID-19 economy. And ever since international shipping restarted, that has caused imports to skyrocket.

The ports of Los Angeles and Long Beach — the busiest port complex in the U.S. — have handled record volumes of imports over the past few months, as businesses work to meet pent-up demand and build up their inventories for the holidays. The surge has been so acute that importers are running out of room in warehouses to store all of those goods.

When products arrive at the ports of Los Angeles and Long Beach, port workers unload them onto trucks or rail cars and those are shipped across the country to distribution centers.

“Let’s say, in the Midwest somewhere, it could be Chicago, Ohio Valley,” said William Villalon, the president of APL Logistics. He said the problem is things haven’t been moving very quickly.

“They’re just being parked because they can’t be taken into the warehouses fast enough,” Villalon said.

Social distancing is slowing down the unloading process. Truck chassis and rail car capacity are in short supply. Warehouses are packed to the rafters.

Available capacity is at its lowest since 2018, said Zac Rogers at Colorado State University. He runs the Logistics Managers’ Index, which tracks supply and demand in the shipping industry.

“COVID-19 has supercharged the warehouse sector because of the increased reliance on e-commerce,” Rogers said.

And with the holidays approaching, Rogers said retailers are competing for whatever storage space they can find.

“That’s really driving up the cost of warehousing, because we don’t have very many warehouses available,” he said.

Warehouse rents in Southern California are up roughly 10% compared to a year ago, according to Jason Tolliver, regional vice president of research at the commercial real estate services firm Cushman & Wakefield.

Retailers are paying that premium and not passing it along to consumers as they head into the holiday season.

“Trying to avoid the worst word that they could possibly hear, which is ‘stock out,’” Tolliver said.

The boom in e-commerce is prompting developers to build more warehouses, especially in urban areas.

“The market appears very healthy, with sufficient levels of demand to really eat up a lot of that space that I think is going to be delivered over the course of this year and next year,” Tolliver said.

The ports themselves are scaling up, too.

Mario Cordero is the executive director of the Port of Long Beach, which has spent roughly $4 billion on infrastructure improvements over the last decade.

“And for the next decade, approximately $2 billion, primarily in rail infrastructure” will be spent, he said.

The idea, Cordero said, is to cut trucks out of the equation, which will move goods faster and be good for the environment.

Yes. There is no way to know exactly how many people have been waiting for months and are still not getting unemployment, because states do not have a good system in place for tracking that kind of data, according to Andrew Stettner of The Century Foundation. But by his own calculations, only about 60% of people who have applied for benefits are currently receiving them. That means there are millions still waiting. Read more here on what they are doing about it.

Are we going to see another wave of grocery store shortages?

Well, public health officials are warning that we could see a second wave of the virus before the end of the year. And this time retailers want to be prepared if there’s high demand for certain products. But they can’t rely totally on predictive modeling. People’s shopping habits have ebbed and flowed depending on the state of COVID-19 cases or lockdowns. So, grocers are going to have to trust their guts.

What’s going to happen to retailers, especially with the holiday shopping season approaching?

A report out Tuesday from the accounting consultancy BDO USA said 29 big retailers filed for bankruptcy protection through August. And if bankruptcies continue at that pace, the number could rival the bankruptcies of 2010, after the Great Recession. For retailers, the last three months of this year will be even more critical than usual for their survival as they look for some hope around the holidays.

As a nonprofit news organization, our future depends on listeners like you who believe in the power of public service journalism.

Your investment in Marketplace helps us remain paywall-free and ensures everyone has access to trustworthy, unbiased news and information, regardless of their ability to pay.

Donate today — in any amount — to become a Marketplace Investor. Now more than ever, your commitment makes a difference.

Women in Supply Chain Show What They’re Made Of: Roopa Gandhi of GEP