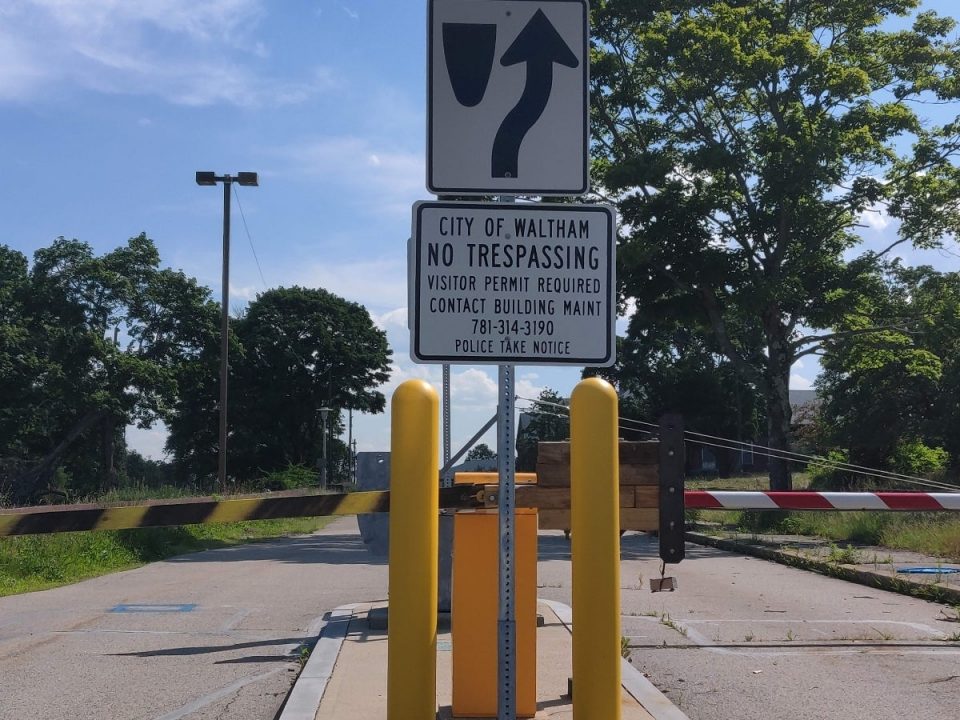 WALTHAM, MA — Part of the abandoned, city-owned Fernald property could be the new home for the city’s public works department.

The mayor is asking that the council consider the Fernald Use Committee’s recommendation that the city should issue a study to determine if the city’s public works move to the Fernald property.

“The site that they’re going to look at is off of Waverly Oaks road and trying to keep us as far away from the residents as possible, that would be the idea,” Director of Consolidated Public Works Mike Chiasson said. “This is just for a study to see if this makes sense, there would still be a long process to get it approved there or anywhere, but I think it’s worth looking into.”

The public works department has been sandwiched between the police and fire headquarters on Lexington Street, where it shares a cramped parking, lot for years. Behind the office buildings there’s a garage for trucks and a number of large bins where the city puts grass cuttings, brush and tree limb, the soot from street sweeping and dirt and asphalt from city jobs. It’s also been utilizing space that will be turned into a proposed rail-trail.

Although the current property is about 22 acres on Lexington Street, various restrictions limit the actual area that can be used, said Chiasson.

But at least one person on the Fernald Use Committee, the city council committee tasked with coming up with recommendations for how to best use the property that the city acquired in 2014, is concerned about moving the department to the Fernald property.

In a letter with the subject “”Regarding Waltham Mayor McCarthy’s recent proposal to move the City’s Public Works Faclity, the City Dump and Transfer Station permanently to the Fernald Property in North Waltham” mailed to residents in wards 1, 3 and 4 last week, Waltham City Councilor George Darcy, who sits on the Fernald Use Committee, decried the proposal.

Darcy said the city would be turning the land into a dump, prompting alarm from neighbors. But the city has not had a transfer station or dump for years, said Chiasson. Trash collected by the trash trucks goes directly to a site in North Andover.

“It’s not a dump, you can’t come in and dump stuff here,” Chiasson said.

The Walter E. Fernald Developmental Center, originally called the Experimental School for Teaching and Training Idiotic Children, was a state institution that came to Waltham in the late 1800s. It grew to include 72 buildings on 196 acres. It came out in the 1970s that for decades children housed there were neglected and abused. A judge ordered changes and it prompted a transition into a center for mentally disabled adults, before it eventually closed for good in 2014.

The state sold the property to the city of Waltham that year for $3.7 million, retaining some rights to profit from future leases and with some historical preservation conditions. The city explored using the property as a police station, but the department indicated they’d rather be more centrally located. A proposal to consider developing a new high school there was shot down regarding environmental concerns. The property has sat empty since then, closed to the public.

City Councilor George Darcy called the proposal, which was first brought to the Fernald Use committee during its Nov. 2 meeting, a fast track of the relocation of the City’s Public Works Facility, Dump and Transfer Station and made six alternative proposals, including establishing a path through the Forest Street Park, introducing security and allowing neighbors to walk the site, renovating two buildings on the property to use for seniors, veteran and lower income housing. He also proposed the city lease part of the property to an organization that specializes in physical therapy on horseback for Waltham residents, students, veterans and individuals with special needs.

When the city first bought the Fernald property and there was discussion about placing a police station there, City Councilor Paul Brasco proposed first finding a better place for the public works department to have more room, according to city officials. Brasco did not immediately return request for comment.

If the city councilors approve the Fernald Use committee’s recommendation it would innitate a site study, but is not a done deal, according to officials. The city would still need to go through a lengthy process before it came to fruition, including finding funding.

“We make due with what we have,” said Chiasson who has been director for the CPW for about 10 years. “This is what it is. We’ve made changes to utilize more area for parking, the site is closed so people can’t come in.

“We have a long way to go, the proposal is just to do a study of that area of the Fernald to see if it would work,” said Chiasson. “We have to see what the outcome of that is first.”

But if it does work, he said, he envisions it as a win for not just his department, but for the police and fire departments as they would get more space to work with.

The city council is set to vote on the proposal to set up a study of the portion of the property Monday at 7:30 p.m.

Jenna Fisher is a news reporter for Patch. Got a tip? She can be reached at Jenna.Fisher@patch.com or by calling 617-942-0474. Follow her on Twitter and Instagram (@ReporterJenna). Have a something you’d like posted on the Patch? Here’s how.

Newspaper headlines: Schools out ’till Easter’ for ‘lost generation’ kids