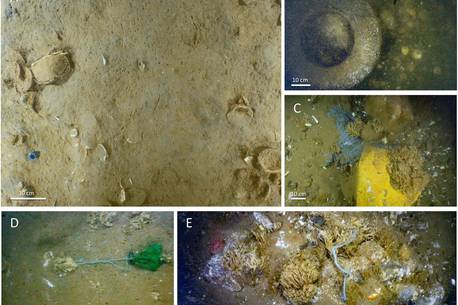 A car tire encrusted in barnacles, three gloves, a derelict lobster trap and plastic. Lots and lots of plastic.
A video survey of the Bay of Fundy bottom turned up some odd objects but by far the most common sight was plastic, particularly bags, said researcher Tony Walker, a professor at Dalhousie University’s school for resource and environmental studies.
“When we extrapolate it, we found that an estimated 1.8 million plastic debris items litter the Bay of Fundy ocean floor. That’s thousands of kilos.”
Walker and his research assistant Alexa Goodman teamed up with the Applied Oceans Research Group at the Nova Scotia Community College’s Ivany campus, as well as Fisheries and Oceans Canada and the Full Bay Scallop Association, for the video survey that was conducted over the past three years.
The researchers used a high-resolution video camera, which was attached to a survey boat, to scan 248 sites in the Bay of Fundy, beginning three years ago and concluding last June.
About 51 per cent of the material seen in the video was obviously plastic, mostly small grocery bags and garbage/recycling bags.  Another 28 per cent was fishing industry debris, much of which also contains plastic.
“So combined that gives us a range of between 70 and 80 per cent of this material is plastic,” Walker said, “which is absolutely consistent with all of the literature around the world in terms of what we are seeing, in terms of marine debris.”
While the ubiquity of plastic on the Fundy bottom didn’t come as a surprise, “what I was excited about  . . .  is that we could actually get visual evidence and empirical evidence to actually count, enumerate and categorize the different types of debris.”

The garbage picked up on video was widespread across the Fundy bottom but it was largely concentrated within nine kilometres of the shore.
The survey did pinpoint what Walker called hotspots of pollution.
“One was near Digby Neck and we think this is a function of the fact tidal currents go through that little channel very fast,” he explained. “It’s got strong currents and we think a lot of the material is almost like kids’ toys left in the bath. They get dragged down near where the plug is, they’re drawn to this pinch point and they probably got snarled up around rocks and cobbles on the bottom.”
Another hotspot was off Gardner Creek, N.B., about 40 kilometres east of Saint John, although Walker had no idea why. It could be as simple as the camera picking up the remnants of a bag that had just broken open, spreading material around.
The video survey results were published in the Marine Pollution Bulletin on Thursday in a paper called “Benthic marine debris in the Bay of Fundy, eastern Canada: Spatial distribution and categorization using seafloor video footage.”
Benthic is the scientific term for the bottom of a body of water.
The findings reaffirm the need to beef up waste management policies, such as Nova Scotia’s recent move to ban single-use plastics by next year, Walker said, since most of the stuff that ends up on the Fundy bottom is land-based.
Individuals, corporations, fishing associations, coastal communities and government all have a role to play, he said,
“This is an absolute last resort for this material and so yeah, we need to get everybody involved.”