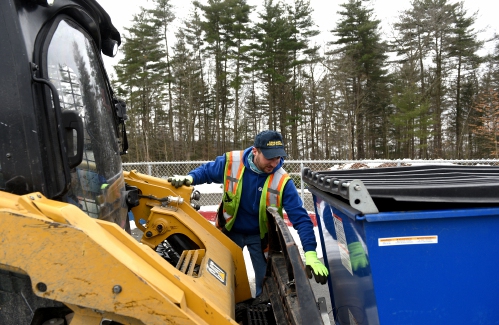 Scavenging animals made backyard composting difficult, she said last week, and paying others to dispose of food scraps was time-consuming and expensive.

But dropping compost off at the landfill is easy for D’Entremont; her family already uses the Route 12A facility to dispose of household trash, and it’s cheaper than other options.

As for separating out food scraps, she said that hasn’t proved an issue either. Compost is kept in the family’s garage and, if anything, might even smell less on its own, she said.

“For us, it’s working in a very similar way except it’s more convenient,” D’Entremont said.

Now, the program D’Entremont took part in is opening up to residents of 23 Upper Valley communities who can dispose of food scraps at the Lebanon landfill as part of a new composting program aimed at reducing waste and extending the landfill’s life span.

For the cost of a $15 punch card, people can drop off a 5-gallon bucket of food scraps every week for the next year.

Items accepted include coffee grinds and filters; eggs and eggshells; cooked meats and bones; and the peels, pits and rinds from fruits and vegetables.

Each bucket should serve a family of four, according to Lebanon Solid Waste Manager Marc Morgan, who estimates that food scraps make up anywhere between 15% and 50% of a household’s weekly trash haul.

“Food scraps are kind of this sneaky little waste that we generate,” he said last week. “It’s not as obvious in your trash — except that it smells when it’s been in your trash for a while — but it’s a considerable amount of material that we throw away.”

The new program follows on the heels of the trial program that D’Entremont participated in. It followed about 50 Lebanon households that began separating food scraps and dropping them off at the landfill last year.

That effort saw families weigh their trash and compost, and record how their habits changed over about six months.

“It was eye-opening for myself as well as the participants,” Morgan said.

Many people were shocked at how much food they were throwing away and made changes to their weekly shopping, Morgan said. Others, he added, were just “thrilled to have another option” aside from throwing food scraps into a trash bag destined for the landfill.

“I can’t say that anything nailed down (assumptions) except that we throw a lot of food away,” Morgan said.

“The most surprising thing was how much removing food scraps from our trash reduced our overall trash,” she said. “We found that it allowed us to space out our trips to the landfill twice as long.”

Act 148, the state’s universal recycling law, mandated that residents separate food scraps starting on July 1, 2020, and all transfer stations are required to accept the material.

Gillett said the Upper Valley’s existing food scrap programs appear to be successful in getting residents to compost.

For instance, he polled those dropping off the hazardous household waste in Hartford earlier this year. About 85% said they compost food scraps.

Gillett said those who don’t compost cited difficulty doing so in small apartments and their own laziness. One person told him the universal recycling law was government overreach.

“There’s quite a few people using that,” she said, adding that the bins are filled almost weekly by residents.

For the time being, Hartford’s food scrap program is free to residents. But Tyler predicted that will change as the town calculates how frequently people are dropping off waste and how much it will cost municipal coffers yearly.

As of January 2019, more than 100 Vermont transfer stations offered food scrap drop-off, covering about 80% of towns, according to the state’s most recent Act 148 status report.

The same report estimated that if every Vermonter composted food waste, greenhouse gas emissions could be reduced by as much as taking more than 7,000 vehicles off the road each year.

In Lebanon, separating food scraps also serves to extend the life of the landfill. Morgan has previously predicted the roughly 40-acre facility has less than a decade before it may need to be expanded, although the city has since taken some actions to reduce construction and demolition debris that took up considerable space.

Instead of going into the landfill, Morgan said, food scraps will be composted and serve as erosion control.

“And so, all of the grass that’s growing on top of the landfill is the result of composted material underneath it,” he said.

More information on Lebanon’s food scrap program is at LebanonNH.gov/1464/Food-Waste-Drop-Off-Program.

Lucid Motors to build a factory in Saudi Arabia

Statewide changes to vaccine distribution could be coming