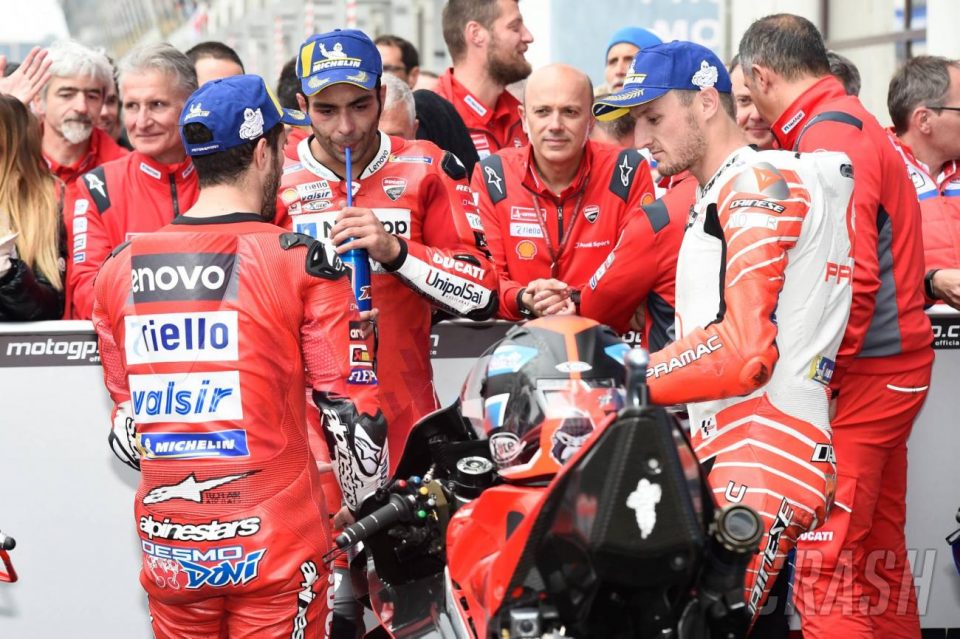 Jack Miller says he has not held talks with the Ducati management about a rumoured promotion to the factory team for 2020 at the expense of Danilo Petrucci.

The Pramac Ducati rider capped an impressive 2019 MotoGP campaign with his fifth podium of the year by taking third place at the Valencia Grand Prix.

After being fastest Ducati rider at two of the last three races this season, Miller has been part of a rumoured multiple-rider switch in the Ducati ranks. The paddock speculation had expected to see the Australian moving up to the factory team with Petrucci heading to Avintia Ducati to provide space for Johann Zarco to slot in at Pramac Ducati.

But Miller has dismissed the rumours and after a strong second season at the satellite Ducati squad is already looking forward to 2020.

“At the moment I haven’t heard. It is just rumours. I have not heard from anybody,” Miller said. “The only time I have heard about it is when I have read Facebook.

“The rest of it I have not heard anything; not from my management, not from Ducati management. We will wait and see as I don’t want to see anyone out of a job and I definitely don’t want to step on anybody’s toes as I am happy as Larry here [at Pramac].

“But I also didn’t know I was about to lose my job after Brno so anything can happen. I seem to not know a lot I guess! Like I said I am happy where I am, if I can stay where I am I’ll be stoked but if I go to the factory team let it be, let it be.”

Miller has also defended his former team-mate Petrucci given his difficult second half of the season with the Italian failing to finish inside the top six since the German round back in July.

“We have to remember back to Mugello and he rode a perfect race but through one way or another he has lost his feet for the moment,” he said. “I think when it is a slow week in the press a lot of these rumours get made up so I don’t put any credit behind them.

“I even saw on the internet this morning there was a photo someone took of me talking to Davide Tardozzi [Ducati team manager] but all it was justs Davide telling me not to destroy my rear tyre. It was on there talking about the 2020 contract and all that. I don’t put any faith behind them.

“I think we will see what it will be but Danilo is a race winner and has been in a rough patch but we all get them now and then. He will be back.”

Latest indications point to Alex Marquez joining his brother at Repsol Honda as Jorge Lorenzo’s replacement for 2020, with Zarco initially linked to Avintia Ducati before he said he was unwilling to join an uncompetitive team.

The rumours evolved putting Zarco at Pramac Ducati with Miller promoted to the factory Ducati squad which have duly been shot down by the Australian rider.

If Alex Marquez is set move to Repsol Honda it would open up a spot at Marc VDS in Moto2 which could be filled by two-time Moto2 world champion Zarco, while the French rider has also been offered a Yamaha test rider role.

When Blockchain Meets Supply Chain of the Future

Soccer Factory: A ‘little itty bitty place,’ but a labor of love | News

“Vision Board Workshop” Center for the Arts @the Candy Factory