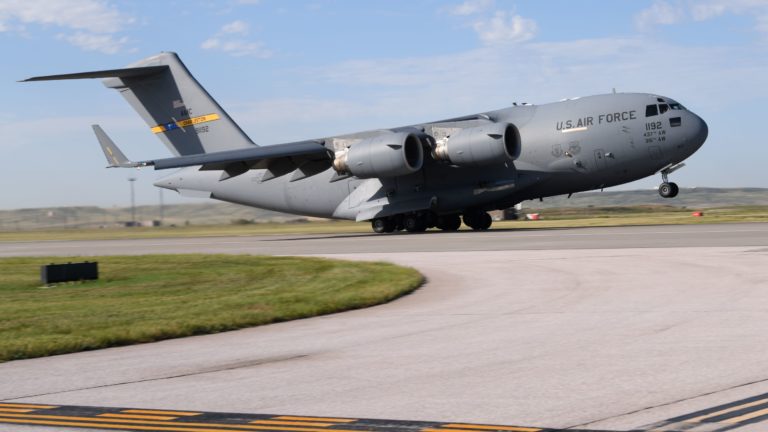 U.S. military aircraft will play a major role in emergency distribution of a COVID-19 vaccine because there aren’t enough private-sector cargo jets to handle the surge of millions of doses that must be maintained at subfreezing temperatures, according to a logistics expert with close ties to the government.

On Wednesday, federal health officials released their COVID-19 vaccine distribution strategy and said they plan to start shipping supplies within 24 hours after the Food and Drug Administration approves a vaccine’s use. The Department of Defense, which is already heavily involved in planning  logistics strategy for getting a vaccine to the entire population as part of Operation Warp Speed, said it doesn’t anticipate any major deployment of military assets to supplement commercial freight transportation providers.

“The first wave or so, I do not think can be handled by the commercial industry. The military will be actively involved in supporting that movement,” said Bill Boesch, who led American Airlines’ cargo division for nine years in the 1990s and now runs a consulting firm that does work for the U.S. Air Force and other DOD agencies. “It’s going to be probably one of the most advanced logistics challenges that we have ever seen since World War II.”

Boesch, who helped the U.S. Army retool its supply lines in Iraq and Afghanistan to eliminate deadly insurgent attacks on truck convoys during the mid-2000s, made the remarks during a virtual conversation about air cargo at the American Shipper Global Trade Tech summit.

Government officials are mapping out the locations of domestic production facilities in relation to distribution depots and administration sites such as clinics and nursing homes to see how much vaccine can move by truck, or if it needs to be flown, Boesch said in a follow-up interview with American Shipper, a FreightWaves publication.

Hospitals don’t have enough storage capacity for the large shipments, he said after the event, so one idea being considered is to load refrigerated trailers on Air Force C-5 and C-17 cargo planes that have roll-on/roll-off ramps. At the destination, the units will be hooked up to waiting tractors for final delivery and then plugged into electric outlets available in most hospital loading areas.

“So you have a portable vaccine unit where the vaccine never comes out of the temperature-controlled unit,” Boesch said. That’s important, he stressed, because the vaccines are likely to have a high protein base, which enables quicker production, but requires them to be kept in the -60 degrees Celsius range with little room for temperature fluctuation.

The Pentagon dismissed the idea that giant military airlifters will be deployed on vaccine missions.

“Our best military assessment is that there is sufficient U.S. commercial transportation capacity to fully support vaccine distribution. There should be no need for a large commitment of DOD units or personnel to support the nationwide distribution of vaccines,” spokesman Charles Prichard said. “Any DOD required support would be by exception. For example, military air assets may be called upon to deliver vaccines to a remote location only if no other means of transportation is feasible. However, there are no details yet on if that option will need to be used during distribution.”

With the U.S. military involved, a total U.S. distribution of a one-dose vaccine could be completed in a few weeks, Boesch predicted.

Operation Warp Speed is a public-private partnership, spearheaded by the DOD and Department of Health and Human Services, designed to develop and deliver 300 million doses of a COVID-19 vaccine by January. The federal government has invested in increasing domestic manufacturing, including specialized materials such as glass vials, to help with faster development and distribution of a vaccine. In August, the Centers for Disease Control tasked McKesson Corp., a large medical supply wholesaler that distributed the H1N1 vaccine during the 2009-2010 pandemic, to support the vaccine distribution.

Some vaccines with ultra-cold storage (-60 to -80 C requirements may be shipped directly from the manufacturer to the administration sites, but all distribution will be managed by McKesson. Other medicines will vary in temperature from refrigerated (2 C to 8 C) to frozen (-15 C to -25 C).

Part of the strategy involves vaccines being manufactured concurrent with clinical trials, several of which are in Phase 3.

Even though FedEx Express (NYSE: FDX), UPS and Amazon (NASDAQ: AMZN) have hundreds of freighter aircraft between them, they “can’t just abandon all of their present customers” to move the quantities of vaccines needed to protect the public, Boesch said.

But Satish Jindel, president of freight analytics company ShipMatrix, said integrated logistics companies, including DHL, will be critical to worldwide distribution of a vaccine.

“They have the ability to develop a new network to handle this for a few weeks,” he said. FedEx and UPS won’t divert assets for the vaccine shipments, “but some of their other customers may get delayed.”

The veteran transportation strategist added that he also expected the Air Force to contribute freighters to the effort.

Passenger airlines, many of which have repurposed idle aircraft during the coronavirus downturn into temporary mini-freighters, will also be tapped to haul vaccines, industry sources say.

“There will be a lot of freight for everyone to make money on,” Jindel said.

Volga-Dnepr, a Russian all-cargo carrier that operates a fleet of Boeing 747 and Antonov An-124 aircraft, is frequently called on to move special project cargoes. A Volga-Dnepr An-124, the largest cargo plane in regular commercial service, recently flew several fire engines from New Jersey to California to help with the wildfires, under contract with the Federal Emergency Management Agency.

But Boesch, who said he is informally providing pro bono advice to government officials involved with Operation Warp Speed, ruled out Volga-Dnepr’s participation in a U.S. vaccine program.

“I don’t think that, at this point with all of the nonsense going on, that we want to use Russian airplanes,” he said, referring to tensions between the countries over Russian election interference and reports of bounties placed on U.S. soldiers in Afghanistan. Plus, “they have a 12-man crew and need very specific landing and takeoff requirements, where you got a C-17 which can land on austere airfields.”

FedEx is working closely with the HHS, DOD and drugmakers on a vaccine distribution plan under Operation Warp Speed, spokeswoman Isabel Rollison confirmed.

“The FedEx network is well positioned to handle these shipments with our temperature-control solutions, real-time monitoring capabilities and a dedicated healthcare team to support the storage, customs brokerage and express transportation of vaccines and bioscience shipments around the world. Our healthcare team is well-versed in the transportation and handling of vaccine shipments. For more than a decade we have shipped flu vaccines each flu season,” she said in a statement provided to FreightWaves.

During the past three years, FedEx has added more than 10 secure, cold-chain facilities worldwide. The express carrier and logistics provider currently has more than 90 refrigerated facilities, and plans to open more in the coming years.

“To complement our existing cold chain capabilities in support of the vaccine distribution, we are also exploring a combination of solutions including stationary freezers, temperature-controlled ocean containers, and refrigerated trailers.

“Working with the FAA, FedEx has significantly increased our capability to carry dry ice aboard our cargo aircraft, allowing us to service more healthcare shippers. On average, we now transport approximately 500,000 dry ice shipments a month,” FedEx said.

The carrier, which has been heavily involved in delivering COVID-19 test kits and personal protective equipment, also is working with healthcare partners to transport vials, syringes and other supplies needed to administer vaccines.

IATA, and others, have recently warned there isn’t enough cold-chain infrastructure around the world to safely and efficiently deliver vaccines at the scale necessary to inoculate billions of people in a short amount of time. Logistics analysts say between 8,000 and 15,000 jumbo jet flights will be needed for vaccine distribution, depending on duration.

Jindel expressed concern that the CDC and trucking companies gearing up for the vaccine release don’t fully comprehend the logistics challenges and intense media scrutiny that will come their way once a vaccine gets the green light.

As soon as production is underway, “if they’re not able to distribute it, if they don’t have the capacity, they will get such a black eye.

“I can tell you they are not ready. If they say they are, they don’t realize what’s coming because they’ve never handled an event like this in their lifetime and the president in the White House is going to be tweeting if any truck company can’t get it out fast enough. He’s going to be calling them names.”

Without robust information systems to communicate in-transit shipment location and delivery times, Jindel added, hospital administrators will be in the dark about where supplies are even if a truck has completed its delivery.

“You got to look at this as war. You got to put it together like you’re fighting an enemy,” said Boesch.

Air cargo’s moon shot: Get COVID vaccine to the world