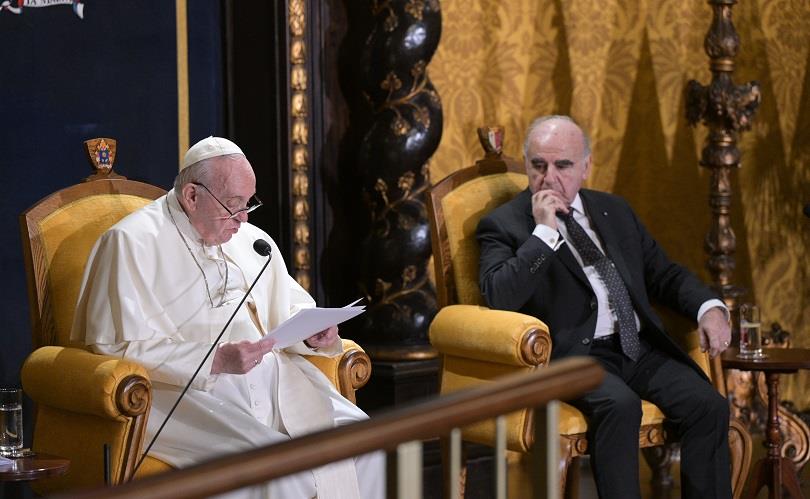 Pope Francis said Saturday that the world yearns for “human moderation before the infantile and destructive aggression that threatens us, before the risk of an enlarged Cold War that can stifle the life of entire peoples and generations.”

War has in fact been prepared for some time by great investments in weaponry and a massive trade in arms, he said in his first address in Malta. “It is distressing to see how the enthusiasm for peace, which emerged after the Second World War, has faded in these recent decades, as has the progress of the international community, with a few powers who go ahead on their own account, seeking spaces and zones of influence.”

Speaking in Italian, with a translation in English provided by the Church, Pope Francis added that “in this way, not only peace, but also so many great questions, like the fight against hunger and inequality are no longer on the list of the main political agendas. But the solution to the crisis of each is care for those of all, since global problems require global solutions.”

“Let us go back to gathering in international peace conferences, where the theme of disarmament will have a central place, where our thoughts will turn to future generations, and where the enormous funds that continue to be destined to weaponry may be diverted to development, health care and nutrition,” Pope Francis said.

Pope Francis was giving his speech at the Grand Council Chamber, where he addressed an audience of some 150 people from Malta’s political and civic authorities and its diplomatic corps.

He spoke for a need for “honesty, justice, sense of duty and transparency are essential pillars of a mature civil society.”

His speech highlighted not only the challenges that Malta faces, including such issues related to the environment, corruption and economic transparency, but also the conflict between Russian and Ukraine and the global consequences that this war will have.

Pope Francis mentioned Malta’s National anthem written by Dun Karm Psaila, saying that “unity and peace are the gifts that the Maltese people implore from God whenever the National Anthem is sung.”

He quoted the following particular verse from the National Anthem: “Grant, Almighty God, wisdom to those who govern, strength to those who work, affirm unity among the Maltese people and peace,” saying that peace follows unity and rises up from it.

“This reminds us of the importance of working together, of choosing cohesion to division, and of strengthening the shared roots and values that have forged the Maltese society in its uniqueness.

To ensure a sound social coexistence, however, it is not enough to strengthen the sense of belonging; there is a need to shore up the foundations of life in society, which rests on law and legality,” Pope Francis added.

In his speech, Pope Francis encouraged Malta to maintain a strong commitment in eliminating illegality and corruption.

“May you always cultivate legality and transparency which will enable the eradication of corruption and criminality, neither of which acts openly and in broad daylight,” Pope Francis said.

He praised Malta for its “luminous beauty of the landscape which alleviates difficulties,” but insisted that it must therefore be kept safe from “rapacious and avarice greed as well as from speculative construction which comprises not only the landscape but also the future.”

Pope Francis also highlighted that Malta shares Western lifestyles and thinking which although it brings about great benefits, it can also bring about risks.

The benefits are related to values of freedom and democracy, whilst the risks call for vigilance lest the desire for progress to be be accompanied by detachment from one’s own roots.

“Malta is a splendid laboratory of organic development, where progress does not mean cutting one’s roots with the past in the name of a false prosperity dictated by profit, by needs created by consumerism, to say nothing of the right to have any and every right,” Pope Francis said.

He added that “a sound development needs to preserve the memory of the past and foster respect and harmony between the generations, without yielding to bland uniformity and to forms of ideological colonization. The basis of all solid growth is respect for the human person, respect for the life and dignity of every man and every woman.”

Pope Francis acknowledged Malta’s commitment to embracing and protecting life but he encouraged the country to continue defending life from its beginning to its natural end.

He especially made reference to the protection and rightful dignity of workers, the elderly and the sick as well as those young people who “risk squandering all the good they have within them by following mirages that leave only emptiness in their wake.”

Pope Francis also focused on the issue of migration.

He thanked the civil authorities and the people of Malta for the welcome they have given them in the name of the Gospel, our common humanity and of their native sense of hospitality.

“Nonetheless, given the growing influx of recent years, fear and insecurity have nurtured a certain discouragement and frustration. If the complexity of the migration issue is to be properly addressed, it needs to be situated within a broader context of time and space,” Pope Francis said.

He explained that time, in the sense that migration phenomenon is not a temporary situation, but a sign of our times. It brings with it the burden of past injustice, exploitation, climatic changes and tragic conflicts, whose effects are now making themselves felt.

“From the poor and densely populated South, great numbers of people are moving to the wealthy north: this is a fact, and it cannot be ignored by adopting an anachronistic isolationism, which will not produce prosperity and integration,” Pope Francis added.

Meanwhile, he continued explaining that from the standpoint of space, the growing migration emergency calls for a broad-based and shared response. He made reference to the refugees from Ukraine who are war-torn.

“Some countries cannot respond to the entire problem, while others remain indifferent onlookers,” Pope Francis said.

He urged that the Mediterranean needs co-responsibility on the part of Europe in order to become a new theatre of solidarity and not the harbinger of a tragic shipwreck of civilization.

With this being said, Pope Francis mentioned St Paul’s Shipwreck, saying that despite what happened, Paul was a man in need of assistance.

“Humanity is first and foremost. Let us help one another not to view the migrant as a threat and not to yield to the temptation of raising drawbridges and erecting walls. Other people are not a virus from which we need to be protected, but persons to be accepted,” Pope Francis said.

“We had thought that invasions of other countries, savage street fighting and atomic threats were grim memories of a distant past. However, the icy winds of war, which bring only death, destruction and hatred in their wake, have swept down powerfully upon the lives of many people and affected us all,” Pope Francis said.

Pope Francis said one should not allow the dream of peace to fade, saying that Malta is an inspiration during a time when it is urgent to restore beauty to the face of a humanity marred by way.

“We need compassion and care, not ideological and populist visions fueled by words of hatred which are unconcerned for the concrete life of ordinary people,” Pope Francis said.

He devoted a final thought to the nearby Middle East, whose languages, harmonized with others, are reflected in the native language of this nation, as if to recall the capacity of the Maltese people to generate beneficial forms of coexistence in a sort of conviviality of differences.

“May Malta, the heart of the Mediterranean, continue to foster the heartbeat of hope, care for life, acceptance of others, yearning for peace, with the help of the God whose name is peace. God bless Malta and Gozo,” Pope Francis said.

In his address, President George Vella said that 75 years following World War Two, Europe is tragically witnessing a dreadful war and the spilling of blood on its soil once more.

The indiscriminate attacks on innocent lives, resulting in deaths, uprooting and displacement, are episodes the world believed it would never see again in Europe.

This is not because we have forgotten our history.

It is because war and everything connected to it, is unacceptable by modern standards and unthinkable even, in this day and age; even though we have almost become complacent to the long years of war and destruction in Yemen, Rwanda, Syria and other countries around the globe, he said.

This war in Ukraine has brought out the worst and the best of humanity.

Against a backdrop of unprovoked destruction and desperation, we are seeing unity, we are seeing empathy and also a sense of solidarity amongst nations; something we had not experienced in generations.

Our planet is sick, angry, and tired. Yet we keep ignoring its manifest signs of environmental degradation, climate change and exploitation of its resources, he said.

Are we giving enough attention to the manifest signals that the planet is sending us, or do we need more convincing evidence that both the human and natural environment are increasingly deteriorating at an alarmingly fast pace?

We cannot ignore the fact that the human and natural environment are intrinsically interlinked.

A viable and sustainable ecology can only be one that preserves and nurtures the human, social and environmental dimensions.

Despite several initiatives, all good intentions and repeated promises, we are a far cry from achieving our environment and development goals. It defies reason why humanity remains intent on destroying or replacing nature’s beauty with its own creations.

Commitments on sustainability are easy to pronounce but difficult to achieve and maintain.

We will continue to actively seek a humane, just, and equitable solution to the issue of irregular migration, Vella said.

“We know how deeply you feel about this issue, and we all feel your pain and disillusionment whenever dead bodies are washed on our shores and when migrants arrive in pitiful situations – if they make it at all. Malta has never shied away from its commitments and obligations to save lives.

“We have done this, and we will continue to do it. However, considering our size and carrying capacity, we continue to ask for solidarity, from other countries that are not on the frontline, but have the resources, the opportunities and the potential to welcome migrants.”

Editorial: Leave politics out of school reopening. Listen to the science.