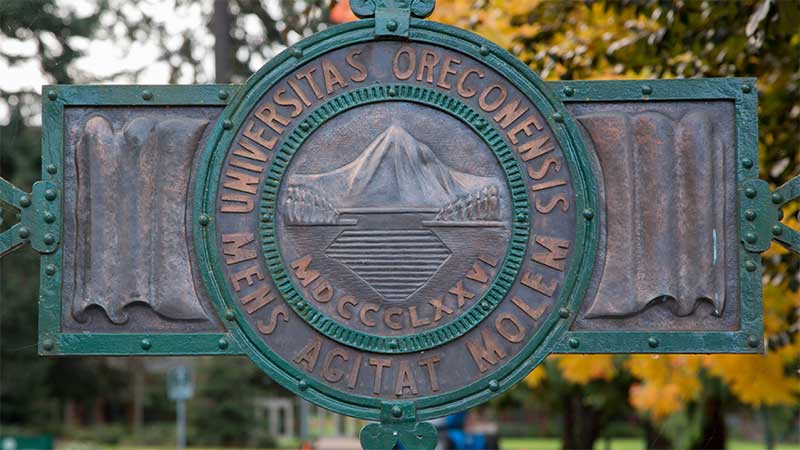 The University of Oregon Board of Trustees last week received briefings on the UO’s fall enrollment numbers, its fundraising efforts and developments at the newly opened Phil and Penny Knight Campus for Accelerating Scientific Impact.

The ad hoc meeting Nov. 13 was the second virtual meeting conducted during fall term. The meetings have been reserved for presentations and board discussions, with no action items on the agenda.

The UO enrolled 3,940 freshmen this fall, a decline of around 13 percent from the 2019-20 school year, according to Roger Thompson, vice president for student services and enrollment management. Total enrollment fell by around 3 percent, for a total of 21,800 undergraduate and graduate students.

The impact of the pandemic was substantial, Thompson said. In March, the university had a record number of applications and appeared on track for its largest ever freshman class, potentially topping 4,800 students.

“Then COVID hit, and it made things very difficult,” he said. “On some level, you could look at this as glass half-full and say it could have been worse. But, given where we had been positioned, this was very disappointing for us.”

Thompson said the UO lost ground, in particular, in enrollment of first-year students from California. The percentage of domestic minority students in the enrolling class remained steady compared to the previous year.

The UO did record its best-ever average high school GPA among freshmen at 3.68, up from 3.55 three years ago.

Bob Guldberg, vice president and executive director of the Knight Campus, provided the trustees with an update on the ambitious new science campus. Faculty and researchers began moving into the facility in early September, and a virtual grand opening event will take place Dec. 2.

“I commented the other day that we built our ‘Field of Dreams,’” Guldberg said. “That ‘Field of Dreams’ is really enabling us to recruit some incredibly talented students and faculty now.”

Goals for the next year include enrolling the first UO-Oregon State University bioengineering doctoral students, launching a bioengineering minor for undergraduate students, hiring additional faculty members in bioengineering, and creating new research and academic partnerships with other institutions of higher education.

“This is so incredibly exciting and it’s really impressive what you’ve put together so far,” said trustee Mary Wilcox.

Mike Andreasen, vice president for university advancement, briefed the board on the UO’s fundraising efforts, including the 11-year ongoing campaign.

The UO raised $290 million in fiscal year 2020, Andreasen said, bringing the campaign total to $2.4 billion of its $3 billion goal. The campaign has also dramatically expanded the number of gifts with a total 112,000 individual donors, 97 percent of whom donated under $25,000.

“In spite of COVID, generosity continues to grow tremendously,” Andreasen said. “We’re at a moment where we’re likely going to pivot from donors just giving out of loyalty … to more ‘impact’ giving, to see universities take on grand challenges and improve the lives of our community.”

President Michael Schill added that philanthropy will continue to play an increasing role at public universities.

“We’re going to be relying more and more upon gifts, philanthropy, foundation support, maybe governmental support to launch new programs and to achieve excellence,” he said. “The Knight Campus is a great example of that. We wouldn’t have been able to do it with state funding or tuition dollars.”

The board will hold a listening session Nov. 17 at 2 p.m. The session will allow members of the campus community and the public to provide oral comment to trustees, since recent virtual meetings have been limited to written public comment due to logistics.

People interested in providing comment must register to do so. Priority will be given to UO students, faculty members and staff. Space is limited to ensure that those participating all have a chance to speak. If registrations exceed the time allotted for the listening session, the board will add another session and give priority to those people who initially registered.