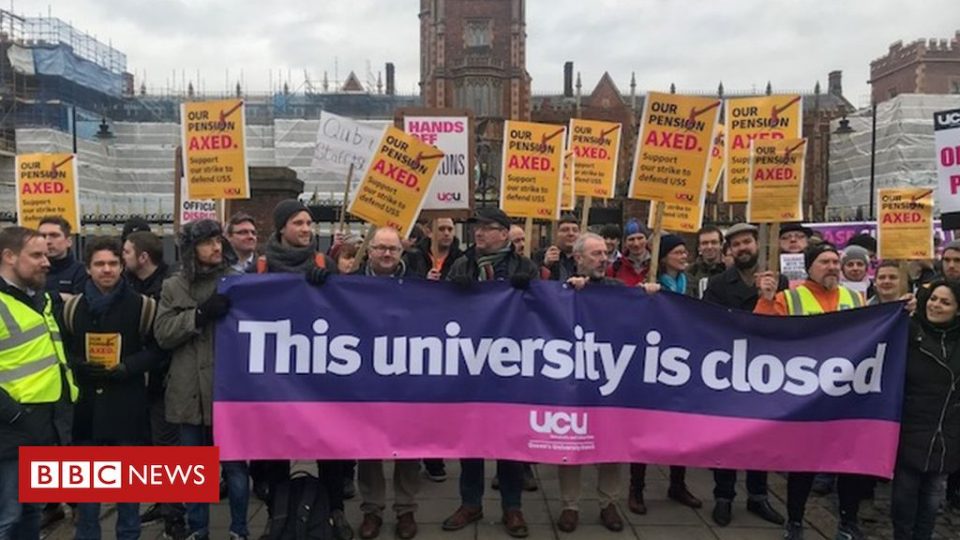 Many lecturers and support staff at Queen’s University (QUB) and Ulster University (UU) are beginning eight days of strike action on Monday.

The action by University and College Union (UCU) members is due to disputes over pay and pensions.

The strike is expected to continue up to and including Wednesday, 4 December.

Management at both Queen’s and Ulster universities have said they will attempt to minimise disruption to classes and lectures.

The walk out follows votes in favour of industrial action and will affect about 60 universities across the UK.

The disputes centre on changes to the Universities Superannuation Scheme (USS), with the union also claiming there has been a failure to improve pay, equality, rates of casual employment and workloads.

Striking staff at Queen’s University will hold a rally at the main gates at 12:00 GMT on Monday.

They have also organised a programme of off-campus lectures, debates and events on each strike day.

In an email to QUB students, the pro-vice chancellor, Prof David Jones, said that while the university would remain open, some lectures and classes would be affected.

“As far as possible, material that has not been delivered as a result of industrial action will not be assessed,” he said.

“The university will make every reasonable effort to mitigate the impact of strike action and ensure that you are not disadvantaged academically.”

A statement from the university added that it was a national dispute and there was nothing QUB “can do unilaterally to resolve this issue”.

In a statement on its website, UU also said that while the strike was “regrettable”, it respected the right of staff to strike.

“We are also taking steps to ensure that students whose studies may be affected by the strike are not disadvantaged at the point of assessment,” UU said.

Academics at both institutions took part in a previous strike over pension changes in 2018.

Turnout in the strike ballot at both Northern Ireland universities was lower than the UK-wide turnout of 53% in the pensions ballot and 49% in the pay and conditions ballot.

However, a majority of those who voted at both universities said they were prepared to take strike action.

Cirtuo: A Laser for Strategic Procurement