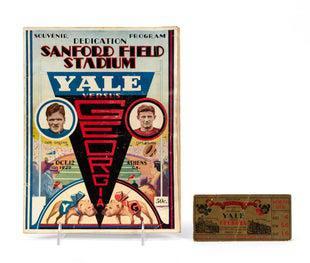 A trove of Athens and University of Georgia history is up for sale next week. The items will be sold to the highest bidder on Oct. 25, the second day of a two-day auction organized by Atlanta’s Ahlers & Ogletree Auction Gallery.

Civil War currency, University of Georgia football memorabilia, souvenirs of the now-vanished Hanna Batrite bat factory and much more are being sold, all from the collections of Ron Evans of Athens, a graphic artist-and-entrepreneur-turned-antiques dealer.

Some of the items on sale had been on display in a little-known room in a section of the Lyndon House Arts Center that’s often overlooked — the actual Ware-Lyndon house built nearly two centuries ago.

In the 1990s, Evans was chair of a committee planning to turn the 1850 house into a museum of the period, including one room of Athens-related historical objects. Evans ferreted out photographs, books and other items from estate sales, auctions — even yard sales, among other sources.

“You’d be surprised how much you can accumulate in five years,” he said.

Now, the Ware-Lyndon House is one of the best mid-1800s houses in Georgia for furniture and decorative arts, interpreting a period right before the Civil War.

“My dream was that this was going to be the start of an Athens history museum,” Evans said. But now, “I’m out of the history business.”

Evans removed many of the items to be auctioned from the Ware-Lyndon House earlier this year, however, after some of his items were removed from public display. Some have already been purchased by the T.R.R Cobb House on Hill Street. The museum and resource center was once the home of Thomas Reade Rootes Cobb, an Athens leader, slave owner and Confederate officer killed in the Civil War. The Cobb House acquired some rare 19th century books and children’s chairs that belonged to the Cobb family.

Much of what Evans is selling is from other collections he’s built related to Athens or UGA.

Some of the specific items on sale include material related to the Hanna Batrite factory that once stood along East Broad Street — bats manufactured there, a child’s souvenir Hanna Batrite lamp and a souvenir miniature bat from the 1944 World Series.

Paper money issued by Athens banks is also for sale. Banks once could print their own money.

Daguerreotypes and ambrotypes, examples of some of the earliest photography, are on the auction block, as well as old Georgia and Yale University souvenir pennants and a ticket and program from the 1929 Yale-UGA football game — the first at Sanford Stadium. Another lot includes a UGA football program autographed by former coaching legend Vince Dooley, with art by Evans himself.

For about 30 years, Evans had a company called Kudzu Graphics and a client for much of that time was the UGA Athletic Association. Evans created art for the covers of UGA football and basketball programs, media guides and the like.

But with the recession of 2008, business slowed to a trickle, and Evans decided to shut the company down and turn a lifetime interest — antiques — into a business.

Photos of the items in the auction are on view at the auction sites LiveAuctioneers, Invaluables and Bidsquare. Online bidding has already begun.

Anyone interested in scheduling an in-person or virtual preview of items and learn where and how to bid can contact Ahlers & Ogletree at aandoauctions.com or (404) 869-2478.

University of Georgia-related objects, including an old Pandora yearbook, are part of an auction next weekend. [Photo courtesy Ahlers & Ogletree]