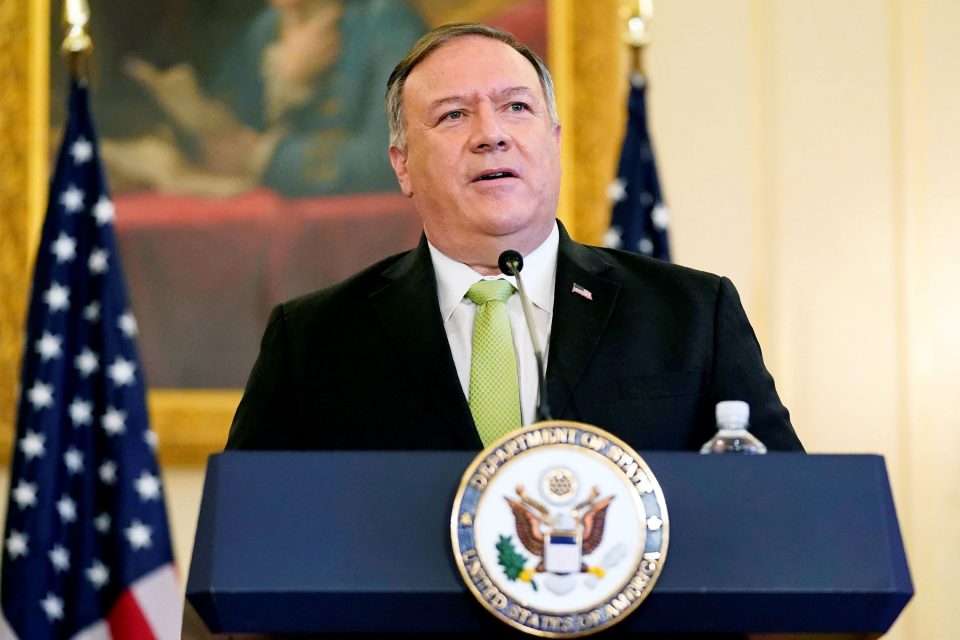 U.S. Secretary of State Mike Pompeo speaks during a news conference to announce the Trump administration’s restoration of sanctions on Iran, at the U.S. State Department in Washington, September 21, 2020.

WASHINGTON — Secretary of State Mike Pompeo warned Sunday that the United States will slap sanctions on any individual or entity that assists Iran’s weapons program, a move that will likely further aggravate tensions between Washington and Tehran.

“For the past 10 years, countries have refrained from selling weapons to Iran under various UN measures. Any country that now challenges this prohibition will be very clearly choosing to fuel conflict and tension over promoting peace and security,” Pompeo said in a Sunday statement.

“Any nation that sells weapons to Iran is impoverishing the Iranian people by enabling the regime’s diversion of funds away from the people and toward the regime’s military aims,” he added.

The threat comes after a decade-long U.N. arms embargo against Iran officially expired Sunday as part of the nuclear deal agreed with world powers in 2015.

Iran’s Foreign Ministry announced that the “Islamic Republic of Iran may procure any necessary arms and equipment from any source without any legal restrictions and solely based on its defensive needs.” However, Tehran said it has no intention to go on a buying spree of conventional arms.

Under the U.N. arms embargo, the export of “certain conventional arms to Iran” and the “procurement of any arms or related materiel from Iran” is in violation of the U.N. Security Council resolution and is subject to sanctions.

However, the U.N. Security Council refused in August to support a U.S. effort to extend the arms embargo against Iran. China and Russia voted against Washington’s efforts, while even close U.S. allies such as Britain, France and Germany abstained. Only the U.S. and the Dominican Republic voted for an extension.

In response, the United States unilaterally re-imposed U.N. sanctions on Tehran last month through a snapback process, which other U.N. Security Council members have previously said Washington does not have the authority to execute because it withdrew from the nuclear deal in in 2018.

“No matter who you are, if you violate the U.N. arms embargo on Iran, you risk sanctions,” Pompeo said in an address on Sept. 21. “Our actions today are a warning that should be heard worldwide,” he added.

Esper followed on Pompeo’s remarks and said the Pentagon was “ready to respond to future Iranian aggression” and called on Tehran to “act like a normal country.”

“We continue to stand shoulder to shoulder with our allies and partners to counter Iran’s destabilizing behavior. In doing so, we will protect our people and our interests and maintain the security of like-minded nations across the region,” Esper added.

Tensions between Washington and Tehran have mounted after President Donald Trump’s withdrawal from the landmark Iran nuclear agreement in 2018, calling it “the worst deal ever.”

The 2015 accord lifted sanctions on Iran that crippled its economy and cut its oil exports roughly in half. In exchange for sanctions relief, Iran accepted limits on its nuclear program until the terms expire in 2025.

Trump has previously said that the U.S. wants to reach a broader deal with Iran that puts stricter limits on its nuclear and ballistic missile work and suppresses the regime’s role in regional proxy wars. Tehran has refused to negotiate while U.S. sanctions remain in place.

Following Washington’s exit from the nuclear deal, other signatories of the pact ⁠— France, Germany, the U.K., Russia and China ⁠— tried to keep the agreement alive.

Earlier this year, a U.S. strike that killed Iran’s top military commander triggered the regime to further scale back compliance with the international nuclear pact. In January, Iran said it would no longer limit its uranium enrichment capacity or nuclear research.