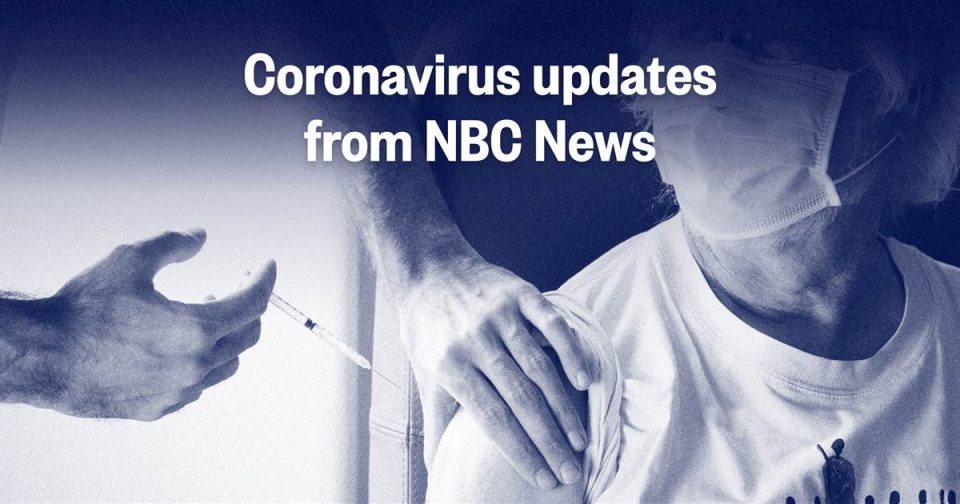 The U.S. crossed the 4,000-person Covid-19 death mark for the second time Tuesday as the pandemic continues to rage across the country.

A total of 4,052 people died from Covid-19 Tuesday, according to NBC News’ tally. The country surpassed 4,000 deaths for the first time on January 7, when 4,110 people died. New daily deaths have risen 21 percent over the last two weeks.

China evacuates some villages in an effort to contain coronavirus outbreak

Around 20,000 people from about a dozen villages in China have been moved to centralized isolation sites on Wednesday, according to China’s state-controlled CCTN news.

The residents of the villages in the Hebei province, where there is currently an outbreak, were taken by bus to hotels, schools and other sites to quarantine, according to the report.

China posted its biggest daily jump in Covid-19 cases in more than five months on Wednesday. It has as a result stepped up containment measures that have seen four cities put under lockdown. The National Health Commission reported a total of 115 new confirmed cases on the mainland, compared with 55 on Tuesday, the highest daily increase since July 30.

Actor Bruce Willis is speaking out after he was photographed entering and exiting a Los Angeles Rite Aid without a mask.

“It was an error in judgment,” Willis told People magazine in a statement. “Be safe out there everyone and let’s continue to mask up.”

After weeks of spiking Covid-19 rates, California is now experiencing a plateau in its rate of new infections, according to an analysis by NBC News.

Yasmine Salam and The Associated Press

Lebanon is set to enter an 11-day, 24-hour curfew on Thursday morning amid a sharp surge in Covid-19 cases in recent weeks. Authorities on Monday announced the tightened restrictions that will prevent residents from going outside to buy groceries.

Hospitals meanwhile, are at maximum capacity, reporting a shortage of respirators and medical supplies.

PARIS — France’s government scientific adviser is expressing strong concern over the variant of the coronavirus that is circulating widely in the U.K. and is now spreading in France.

Dr. Jean-François Delfraissy, president of the scientific council that advises the French government on the virus, said on news broadcaster France Info that a two-day study based on 100,000 positive tests showed that about 1% of people were infected with the more contagious variant that has been discovered in the U.K.

“In any case, we’ll see an extension (of the variant), but we’re going to try to slow it down,” he said.

France is engaged in a “speed race” to vaccinate the most vulnerable people, he added.

SEOUL, South Korea — A South Korean court has acquitted a religious sect leader of charges that he deliberately disrupted the government’s anti-virus response early last year after thousands of his worshippers were infected with the coronavirus.

However, the Suwon District Court on Wednesday found the 89-year-old Lee Man-hee guilty of separate charges that he embezzled more than $5 million in church funds and organized unauthorized worship services in public spaces. His three-year prison term will be suspended for four years.

Lee’s church, the Shincheonji Church of Jesus, issued a statement denying his wrongdoings and confirming plans to appeal. Kang Susana, a prosecutor in Suwon, said her office would decide whether to appeal after analyzing the ruling.

Prosecutors had sought a five-year prison term for Lee, who was arrested in August before his release on bail in November. They accused Lee and his church of violating the country’s infectious disease law by deliberately hiding some of the church’s membership and under-reporting its gatherings to avoid broader quarantines following the outbreak around the southeastern city of Daegu in February and March last year.

But the court said it was unclear whether the church’s failure to provide a full list of its membership was a crime. The collection of such basic information isn’t part of the specific boundaries of contact tracing spelled out by the law, the court said.

A study published in the United Kingdom on Wednesday found “substantial rates of probable mental health disorders” among intensive care workers during the pandemic.

It surveyed 709 doctors, nurses and other staff in England and found that almost half displayed symptoms consistent with post-traumatic stress disorder, severe depression or anxiety, or “problem drinking.”

Around one in seven reported thoughts of self harm or feeling they would be “better off dead,” according to the study led by King’s College London. It conducted the surveys in June and July and its peer-reviewed results were published Wednesday.

The U.K. is currently struggling with one of the worst outbreaks in the world, with a faster infection rate and higher deaths per capita than the U.S. and most other countries.

Food distribution to halt at Cajun Field; Second Harvest to serve in other efforts | Coronavirus