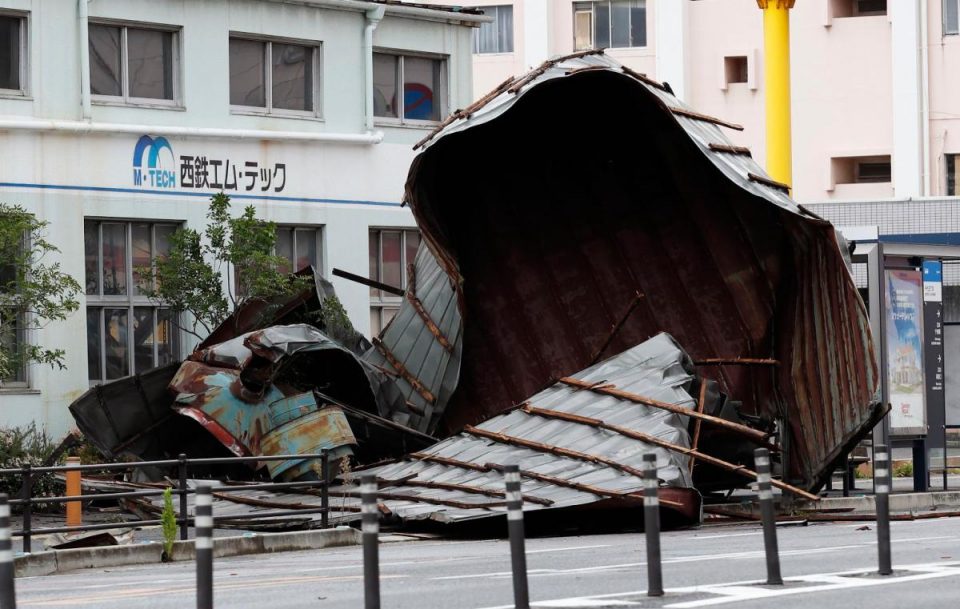 TOKYO (AP) — The second powerful typhoon to slam Japan in a week damaged buildings, caused blackouts in nearly half a million homes and injured 20 people on southern Japanese islands before heading to South Korea on Monday.

Traffic in southern Japan was still paralyzed even after the typhoon passed. Bullet trains were suspended and most domestic flights in and out of southwestern Japanese airports were cancelled Monday. The Japan Meteorological Agency warned strong winds and torrential rain would continue even after the typhoon moved north.

By Monday morning, Haishen, which means “sea god” in Chinese, was near the southeastern coast of South Korea packing sustained winds of up to 144 kph (89 mph).

The storm slammed Okinawa and other islands over the weekend with heavy rain, rough waves and high tides.

The Fire and Disaster Management Agency said Monday that at least 20 people, including two seriously, were injured in several southern prefectures. As of Monday morning, about half a million homes were still out of power.

Haishen is the second typhoon in less than two weeks to take a similar path through southern Japan and the Korean Peninsula. Typhoon Maysak last week injured dozens of people and damaged homes and other buildings.

A livestock cargo ship capsized and sank off Japan’s coast during stormy weather as Maysak passed. Two of its 43 crew members were rescued and one body was recovered before the search was halted because of Haishen. The ship was transporting 5,800 cows from New Zealand to China.