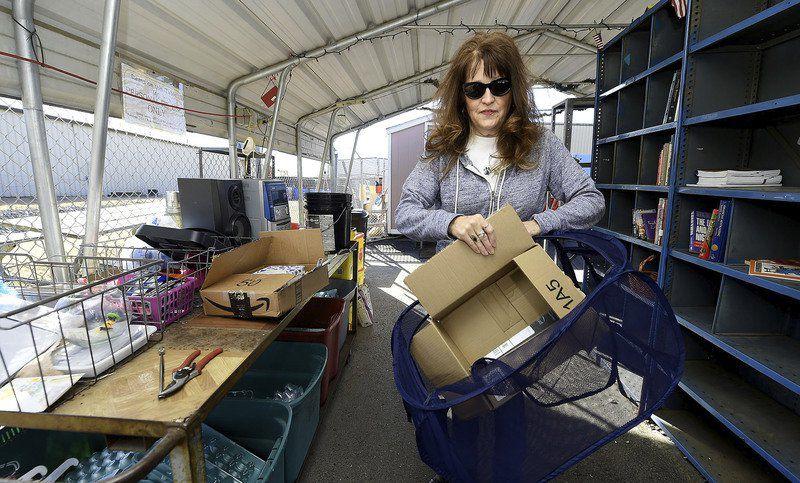 The Joplin Recycling Center she helped start in 2000 turns 20 years old today. Then, next Friday, she will retire from her employment with the city of Joplin as the coordinator of recycling and solid waste programs, and stormwater education.

There are no special activities planned for the anniversary because Phillips has been busy preparing her office for the transition to her successor, who has not yet been named by the city. However, city officials will hold a retirement reception for her from 2 to 4 p.m. Friday on the fifth floor of City Hall.

Phillips had worked as a volunteer for a recycling program in Kansas City before she came to Joplin. She knew how that one operated and visited several other recycling operations. She ultimately patterned the initial program here after one Branson had at the time.

At the start, city officials did not think many people would use the center, “but we did very well that first year,” Phillips said. “The markets were up, and so that gave us a false sense of security. But I had been in the business for a couple of years, and I knew the markets would fluctuate.”

Market fluctuation, along with other factors, has caused demand for some recycling materials to bottom out the past few years, glutting many recycling collectors with paper and plastics. The largest market for the material, China, enacted tough restrictions in 2017 on the materials it would take from the U.S. partly because they were contaminated with trash.

That is a challenge to the industry now. The company that takes Joplin’s curbside recycling, Marck Recycling of Cassville, from the Joplin hauling contractor, Republic Services, said last year up to 25% of the loads it receives from curbside collection (but not the recycling center) are so contaminated those loads have to be dumped at a landfill.

“We never rely on the revenue from the sale of commodities,” to pay operating costs, Phillips said.

The center generates a varying amount from the sale of commodities from $5,000 to $25,000 a year. “Which is why you don’t see any for-profit companies out there doing full service” recycling, she said.

The bulk of the revenue for recycling comes from city property taxes that are designated to go into the solid waste fund. There also are some grant funds that go toward the cost of operating or for specific projects.

David Hertzberg, director of the public works department where Phillips works, said she has generated about $500,000 in grants for the operations during her career.

Part of her job since the beginning has been to educate people about the service and what can be taken to the recycling center. The materials accepted have grown over the years from paper, plastic and metal cans to include electronics and certain household hazardous wastes.

The most asked question for Phillips is whether the recycling center is open only to Joplin residents. She said it is open to anyone in the region, although it does not accept commercial loads.

Recycling is not Phillips’ only duty with the city.

She also is education manager for the city’s stormwater permit issued and regulated by the Environmental Protection Agency.

Phillips also has handled many ice and wind storm debris cleanup tasks, four of which were declared national disasters in Joplin by the Federal Emergency Management Agency.

One advantage is that it keeps materials that can be recycled out of landfills. It also creates jobs and helps the economy.

“Once you put cardboard in the landfill, it’s gone forever,” she said.”Whereas if you take the cardboard to a recycler, it comes back as the core of a roll of toilet paper or an egg carton or as the backing of drywall. There’s a million things you can do with it.

“It also creates a mindset of, ‘Hey look at all this waste. Maybe I shouldn’t buy all this to begin with or buy in bulk.'”

One of them, Joy Schaum, said she makes regular trips to Joplin from rural Neosho to use the center.

That also is the reason Shannon Wendt, a teacher at Ozark Christian College, has collected recyclable materials from several people and agencies to bring to the center for the 20 years it has been in operation.

She said she does it because “possibly, I believe the propaganda. I know people think that’s what it is, but I believe it makes a difference. What it’s done for me, more importantly, is I quit buying plastic. It changed all my shopping habits. I buy bar shampoo. I never buy water or soda out of plastic bottles. I’m a firm believer, and I know its kind of poetic, but I’m a firm believer in the first commandment, ‘Keep the Garden,'” she said, a biblical reference to Adam being told by God to tend the Garden of Eden.

Phillips predicts several changes for the industry over the next 20 years.

“I’m worried for the near future because the markets are so bad,” she said. “As landfills become more expensive and available land does go away I think we will see more incinerators,” to get rid of trash rather than burying it in landfills. “I think we’ll see less packaging waste — that’s already started — and I think we’ll see more product stewardship.”

The Joplin Recycling Center is located at A Street and Porter Avenue. It is open noon to 6 p.m. Tuesday and Thursday and 9 a.m. to 3 p.m. Wednesday, Friday and Saturday. It is closed Sunday and Monday.

Items accepted for recycling or reuse:

• Electronic waste (there are fees to take some items).

How Retailers Can Thrive In The Era Of The “Conscious Consumer”

Secrets of getting higher yields taught at the farm clinic