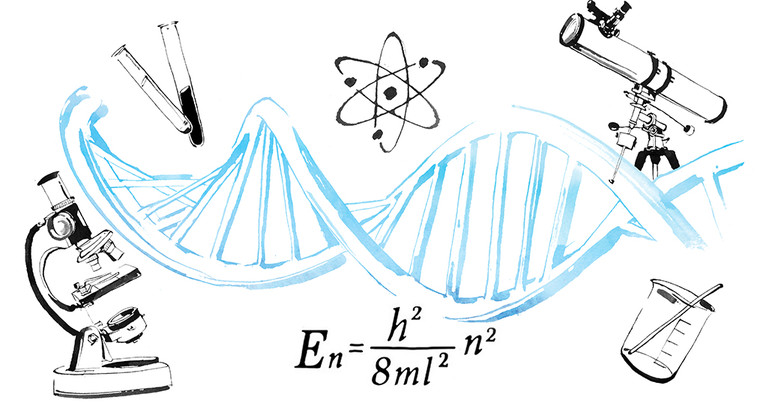 This month, Insights & Outcomes pays a quick visit to the ever-elusive Tully Monster, gets into the genetics of the novel coronavirus, and takes a moment to salute Yale’s picoscience prowess.

As always, you can find more science and medicine research news on the Science & Technology and Health & Medicine pages on YaleNews.

The Tully Monster — a 300-million-year-old creature with an extended claw where its mouth should be and eyes that protrude from the ends of stalks — was a vertebrate. This we now know thanks to new research co-authored by several Yale paleontologists. The researchers analyzed molecular signals in known vertebrates (creatures with a backbone) and invertebrates (without a backbone) found in the same Illinois fossil beds as Tully Monster fossils. The soft tissue of the vertebrate fossils had high concentrations of sulphur compounds — similar to those found in Tully Monster soft tissue. Invertebrate soft tissue, on the other hand, had high levels of nitrogen compounds. “This shows, in a very exciting way, the potential of fossil biomolecules for understanding problematic fossils,” said co-corresponding author Jasmina Weimann, a graduate student in the Department of Geology and Geophysics. Co-authors from Yale were graduate student Christopher Whalen and Derek Briggs, the G. Evelyn Hutchinson Professor of Geology & Geophysics in the Faculty of Arts and Sciences. The study appears in Geobiology.

Why do some young people infected with the novel coronavirus have strokes and those with hypertension tend to have poorer outcomes? Older people and those with underlying diseases generally face a higher risk of complications from COVID-19, but age and underlying disease alone don’t provide a complete picture of an individual’s risk profile, researchers say. Yale is among the academic institutions looking for genetic explanations for the highly diverse outcomes of COVID-19 patients. “The hope is if we find a genetic variation in, say, 1% of the population that puts them at higher risk, doctors can advise them to follow specific clinical guidelines,” said Yale professor of genetics Michael Murray,director for clinical operations in the Center for Genomic Health. “If you are in the 99% who are not at high risk, you can go about a more standard management routine.” The tool geneticists plan to use is genome-wide association studies, which identify the entire genetic makeup of an individual. Such genetic tests — given to COVID-19 patients with poor outcomes and compared with those of individuals with lesser or no symptoms — could help pinpoint variations linked to severe disease. Such large-scale population tests might also help identify genetic risk factors in hard-hit groups such as African Americans, Murray said. In a new essay in the journal Genetics in Medicine, Murray and colleagues from several universities advocate expanding these efforts to identify genetic risk factors that can be used to improve treatment of COVID-19 patients.

Over the past decade, Yale has made a series of advances in picoscience — the study of materials at a scale a million times smaller than a micrometer. The latest of these advances involves iron selenide (FeSe), a superconducting material valued as a component in high-tech gear such as MRI machines and quantum computing research. Yale researchers studied a one-atom-thick layer of FeSe and discovered a tiny distortion in the positioning of the atoms. This distortion enhances FeSe’s superconductivity at higher temperatures (Most superconductors have to be chilled to nearly absolute zero). The discovery offers insights for creating more practical superconductors. “This measurement required a close collaboration between unique instrumentation at Argonne National Laboratory’s synchrotron and the crystal growth capabilities at Yale,” said co-author and senior research scientist Fred Walker. Charles Ahn, the John C. Malone Professor of Applied Physics, Mechanical Engineering and Materials Science, and Physics, and chair of the Department of Applied Physics in the Faculty of Arts and Sciences, was senior author of the paper. The study appears in Science Advances.

Astronomers have puzzled over Mercury’s strange makeup for many years. Unlike Earth, Mercury has a large, iron core that accounts for more than 80% of its radius. One possible explanation is that a large object crashed into Mercury long ago, blasting away much of its outer layers. But there’s a problem with that theory: Most researchers say the debris wouldn’t have gone very far and likely would have fallen back into Mercury. Now, a new study has given the “impact theory” new life. “This work shows that the solar wind was strong enough billions of years ago to blow the ejected material away from Mercury’s orbital trajectory after the impact,” said Yale astronomy postdoctoral fellow Christopher Spalding, first author of the study. “It saves the giant impact theory as an explanation for Mercury’s large iron core.” The study appears in The Planetary Science Journal.

Doctors who care for people hospitalized with severe brain damage often need to discuss the patients’ cases with family members charged with making life-or-death decisions about whether to continue care for the patients. But what are the major concerns family members have when making these decisions? A new Yale-led study of a representative group of nearly 1,600 people might help doctors prepare for these painful discussions. In two separate surveys, U.S. respondents were asked to prioritize their concerns about care for a hypothetical, older adult patient whose prognosis was either severe functional disability or a vegetative state. Both surveys showed almost all respondents expressed a desire that the wishes of the patient be respected and that their suffering be minimized. However, differences in concerns also emerged among respondent subgroups. The age of the patient was a major factor in considering whether to prolong care for a severely disabled patient among a large subgroup of respondents. Other subgroups included those concerned with gaining a family consensus on a decision, those with doubts about the accuracy of the prognosis, and those with concerns about the potential costs of long-term care. For those specifically asked to make decisions about care of those in a vegetative state, a large respondent group was particularly concerned with acting according to one’s religious beliefs. Yale’s David Y. Hwang, associate professor of neurology, was lead author of the study published in the journal Neurology.

It’s never too late to catch up on Yale research news. Click on the links below for a mix of stories about species diversity, imaging tools for understanding Alzheimer’s disease, a swimming dinosaur, a scorching-hot planet, and new approaches to water desalination.

Unable to Get a Procurement Slip, Sugar Cane Farmer Commits Suicide in Muzaffarnagar

Applying Material Innovation: Does Architecture Have What It Takes?