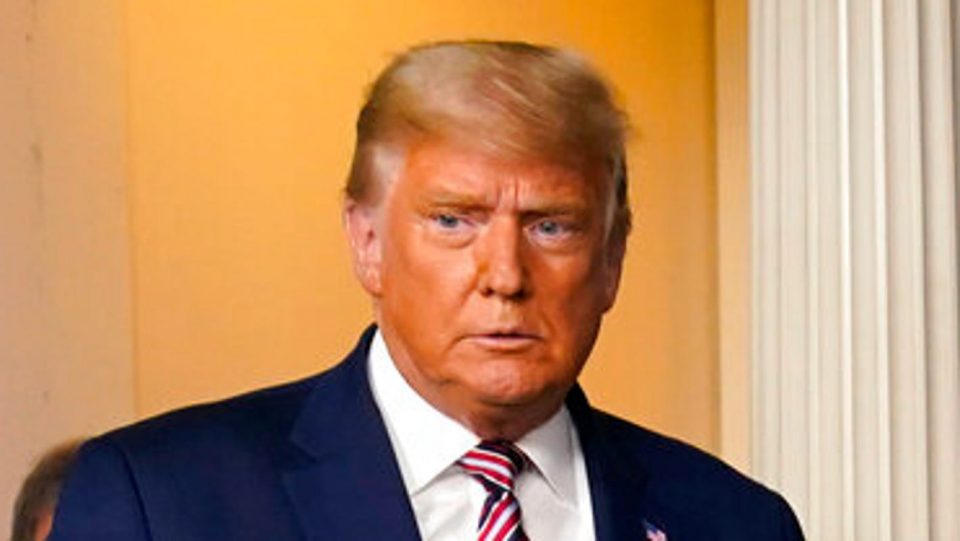 Washington – Refusing to concede a presidential election he lost, President Donald Trump sought falsely to take full credit for drugmaker Pfizer Inc.’s announcement that its COVID-19 vaccine may be 90% effective, wrongly asserted the vaccine news was delayed until after Election Day to undermine him and repeated baseless claims of voter fraud.

TRUMP: ”’President Trump told us for some time we would be getting a Vaccine by the end of the year and people laughed at him, and here we are with Pfizer getting FDA approval by the end of this month. He was right.’ @MariaBartiromo.” – tweet Tuesday.

THE FACTS: Trump’s suggestion – quoting Fox Business anchor Maria Bartiromo – that he stood alone in saying a COVID-19 vaccine was possible by year’s end is incorrect. Actually, top health experts said they considered that possible, though far from certain, and were more skeptical of Trump’s claim that a coronavirus vaccine would become available before the Nov. 3 election. The vaccine isn’t expected to become widely available to the general public before 2021.

Dr. Anthony Fauci, the government’s top infectious diseases expert, had previously said that he was “cautiously optimistic” that a vaccine will be ready by late 2020 or early 2021. On Monday, he called Pfizer’s news “extraordinary” but reiterated that it did not mean the U.S. had its immediate cure-all for the coronavirus.

The first step for Pfizer would be to apply for “emergency use authorization” by the Food and Drug Administration, likely later this month, which would allow for limited distribution before it seeks full FDA approval for wider use. Neither step is guaranteed to happen.

“There’s still some questions about, you know, the durability of the effect about whether how effective it is in the elderly versus younger people,” Fauci told CNN. “We know this is light at the end of the tunnel, but that doesn’t mean that we’re going to give up the important public health measures that we continually still have to do every single day.”

Pfizer’s interim analysis, from an independent data monitoring board, looked at 94 infections recorded so far in a study that has enrolled nearly 44,000 people in the U.S. and five other countries.

Some participants got the vaccine, while others got dummy shots. Pfizer says only the data and safety monitoring board knows the breakdowns, not Pfizer researchers or executives. For the vaccine to be 90% effective, nearly all the infections must have occurred in placebo recipients. The study is continuing, and Pfizer cautioned that the protection rate might change as more COVID-19 cases are added to the calculations.

During the presidential campaign, Trump frequently suggested a vaccine might arrive before the Nov. 3 election.

“What I said is by the end of the year, but I think it could even be sooner than that,” Trump said in September about a vaccine. “It could be during the month of October, actually could be before November.”

TRUMP: “As I have long said, @Pfizer and the others would only announce a Vaccine after the Election, because they didn’t have the courage to do it before. Likewise, the @US–FDA should have announced it earlier, not for political purposes, but for saving lives!” – tweet Monday.

TRUMP: “The @US–FDA and the Democrats didn’t want to have me get a Vaccine WIN, prior to the election, so instead it came out five days later – As I’ve said all along!” – tweet Monday.

THE FACTS: His claim that Pfizer and the FDA withheld vaccine information until after the election is false. The company itself learned of the interim results on Sunday, and the FDA was not involved in Pfizer’s decision to announce its early results.

Every vaccine study such as the one done on Pfizer’s is overseen by an independent “data and safety monitoring board,” or DSMB. These boards include scientists and statisticians who have no ties to the vaccine makers.

Before a study is complete, only the DSMB has the power to unlock the code of who got a real vaccine and who got a placebo, and to recommend if the shots are working well enough to stop testing early.

Those boards take sneak peeks at predetermined times agreed to by the manufacturer and the FDA. It provided the first interim analysis for Pfizer on Sunday.

John Burkhardt, senior vice president of drug safety research and development at Pfizer, said Monday that the timing of the company’s vaccine announcement was not related in any way to the presidential election and was made as soon as the efficacy data was ready. Pfizer CEO Albert Bourla told CNN the timing had nothing to do with politics.

Pfizer and the maker of the other leading U.S. vaccine candidate, Moderna Inc., have been cautioning for weeks that the earliest they could seek regulatory approval for wider use of their shots would be late November.

TRUMP: “‘Only because of President Trump, we are going to have a Vaccine by the end of the year.’ Ronny Jackson, Texas Congressman-Elect.” – tweet Tuesday.

THE FACTS: Trump (quoting his former White House physician) and Pence are wrongly seeking full credit for forging the partnership that made the potential breakthrough possible. Pfizer notably did not accept government money to develop, test or expand manufacturing capacity under Trump’s Operation Warp Speed initiative to quickly find a vaccine and treatments for the disease sweeping the country.

In fact, Pfizer partnered with the vaccine’s original developer, Germany’s BioNTech, in March and the following month announced the first human study in Germany. The White House announced Operation Warp Speed in May.

Pfizer opted not to join Operation Warp Speed initially but is following the same general requirements for the vaccine’s development as competitors who received government research money. The company says it has risked $2 billion of its own money on vaccine development and won’t get anything from Washington unless the effort is successful.

“Pfizer’s COVID-19 vaccine development and manufacturing costs have been entirely self-funded,” Pfizer spokeswoman Jerica Pitts said Monday. “We decided to self-fund our efforts so we could move as fast as possible.”

However, Pfizer did sign an agreement with the U.S. government in July worth $1.95 billion – if the vaccine pans out and is cleared by the FDA – to supply 100 million doses. That guarantees Pfizer a U.S. market, an important incentive.

The supply side of Operation Warp Speed also allows Pfizer logistical help, although the company will directly ship its own vaccine, while the government will control shipping of other COVID-19 vaccines.

TRUMP: “Georgia will be a big presidential win, as it was the night of the Election!” – tweet Monday.

THE FACTS: He’s falsely suggesting that any ballot counted after Election Day in Georgia and other states is illegitimate and illegal. In fact, that is explicitly allowed in roughly 20 states, and the Supreme Court did not stand in the way of it.

Trump refused to concede and said he will press his legal challenges, despite seeing several lawsuits dismissed by courts.

TRUMP: “Pennsylvania prevented us from watching much of the Ballot count. Unthinkable and illegal in this country.” – tweet Monday.

THE FACTS: His assertion is false.

Trump is wholly misrepresenting a court case in the state and what happened at voting places. No one tried to ban poll watchers representing each side in the election. Democrats did not try to stop Republican representatives from being able to observe the process.

The main issue in the case was how close observers representing the parties could get to election workers who are processing mail-in ballots in Philadelphia. Trump’s representatives sued to allow the observers to get closer than the guidelines had allowed. A court ruled in favor of that request.

The counting in Philadelphia was being livestreamed and Trump’s lawyers admitted in court that their campaign had observers in the room – “a non-zero” number of them, as they put it.

It was well-known that huge numbers of mailed-in ballots as well as in-person ballots were to be counted after Election Day and that many would be from Democratic-leaning areas. That’s why news organizations did not call Pennsylvania for Trump.

TRUMP: “WATCH FOR MASSIVE BALLOT COUNTING ABUSE AND, JUST LIKE THE EARLY VACCINE, REMEMBER I TOLD YOU SO!” – tweet Tuesday.

THE FACTS: He’s making unsubstantiated claims. There is no evidence of widespread fraud in the 2020 election. In fact, election officials from both political parties have stated publicly that the election went well and international observers confirmed there were no serious irregularities.

The issues Trump’s campaign and its allies have pointed to are typical in every election: problems with signatures, secrecy envelopes and postal marks on mail-in ballots, as well as the potential for a small number of ballots miscast or lost. With Biden leading Trump by wide margins in key battleground states, none of those issues would have any impact on the outcome of the election.

Trump’s campaign has also launched legal challenges complaining that their poll watchers were unable to scrutinize the voting process. Many of those challenges have been tossed out by judges, some within hours of their filing, and none of the complaints show any evidence that the outcome of the election was affected.