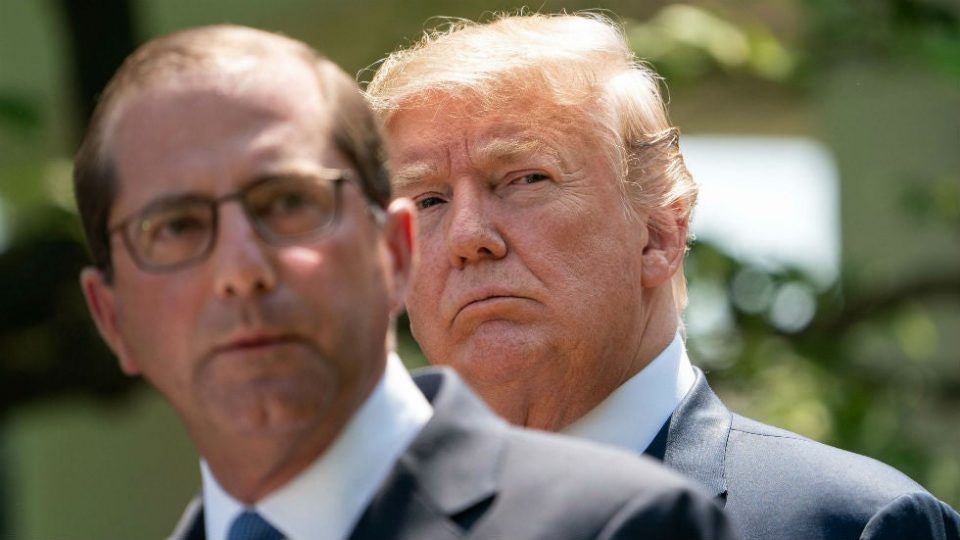 Donald John TrumpLev Parnas implicates Rick Perry, says Giuliani had him pressure Ukraine to announce Biden probe Saudi Arabia paid 0 million for cost of US troops in area Parnas claims ex-Trump attorney visited him in jail, asked him to sacrifice himself for president MORE lashed out at Health and Human Services Secretary Alex Azar on Thursday for not doing enough to help him win over voters on health care, according to multiple reports.

According to the reports, Trump phoned Azar after being presented with polling that showed voters trust Democrats more than Republicans on health care and drug pricing.

Trump has made lowering drug prices a top focus of his presidency, and has been searching for easy political wins, but has little to show for it. Key initiatives have been blocked by the courts, and others have been stalled amid opposition from fellow Republicans.

According to The Washington Post, Trump told Azar he was “not getting it done,” and needed to “hurry up” on lowering drug prices and more quickly allow for the importation of drugs from Canada. “Why aren’t we getting these drugs from Canada?”

In December, the administration issued a proposal that would lay the groundwork to allow states, pharmacies, wholesalers and manufacturers to import prescription drugs from Canada.

Importing drugs from abroad is a departure from the traditional Republican approach, but Trump has long supported the idea, even as it faces significant headwinds. Critics and drug pricing experts believe it won’t be effective, and view it as political posturing.

According to Axios, Trump also pressed Azar about the administration’s new vaping policy, and expressed regret for getting personally involved in something he should have left to the Food and Drug Administration to sort out.

Trump has been touting a series of actions on drug pricing and other consumer-friendly issues, a move designed to position the president as a populist champion of transparency and reduced medical bills.

But the president faces an uphill battle, especially with regards to ObamaCare. While Trump has tried to defend his record with misleading statements and tweets, Democrats aren’t letting voters forget his repeated efforts to repeal and undermine the law.

Trump has also backed a court challenge that would repeal the law and eliminate requirements protecting coverage for people with pre-existing conditions.

Polls have also shown that the public trusts Democrats more than Republicans, especially after GOP efforts to repeal ObamaCare.

“There’s no daylight between the White House and HHS as we work to implement the President’s policies and improve the American healthcare system for everyone, not just those in the individual market,” White House spokesman Judd Deere said in a statement to The Hill.

“While the radical left has sweeping proposals for a total government takeover of healthcare that will eliminate private insurance for 180 million Americans, the Trump Administration has achieved real solutions that are providing Americans with the options and control they want and the affordability they need,” he said.