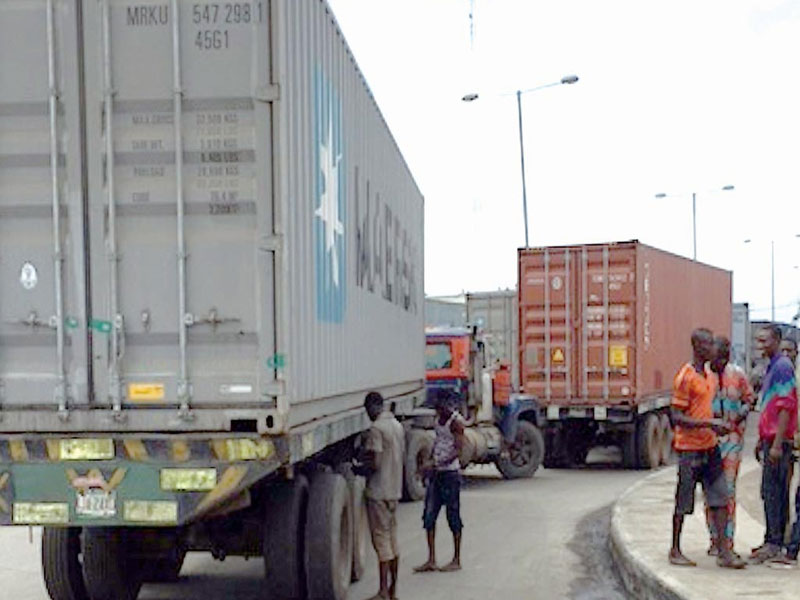 It was one morning in 2012, at what is known as Mile Two Oke, in my vehicle, conveniently hedged in a hold-up between traffic on my right and on my left the usual embarkment demarcating the expressway, such that I cannot open the door. Just as I began to have a sense of foreboding, there comes what might have befallen me as a tragic fate: a rickety truck, looming out of the opposite direction and just as I pictured it, my mind appeared to drag it allure until apparently out of control, the articulated truck rammed into the concrete wall, directly by my side.

The rest was a surreal experience, transfixed trepidation. I watched the truck lush forward, staggering ominously, it reeled before what appeared to be an invisible mighty arm quacked it away, it then ricocheted, landing on the middle of the road on the other side, its wheels spinning. A lady was missed on that side by a hairs’ breadth.
I began to develop a pathological hatred for articulated vans, such that I would not like to see them no matter the service or good they render. Reported fatalities accruing to these trucks have continued to grow in number and in bizarre account.

When you look into the driver’s compartment and see the jerks on its wheel, you’d agree that even more culpable are those that hand them the keys. On the head and tail boards of these lorries are usual inscriptions of various kinds, such as ‘Beware Many Have Gone’ ‘No King As God,’ etc., purporting moral or spiritual virtue but so much at variance with their conduct and behavior. Some prominent people in society use these trucks to launder money, others as index of opulence just as the cattle of old. But whether of pride or envy they appear coveted, such that they’re gradually out-numbering saloon cars on the road. The drivers are usually prepared to die or kill for right of way. When you slow down ahead, they speed up from behind tooting madly, whatever made you slow down not-

withstanding. Should you happen to be by their side, they keep revving and spewing you with fumes, enough to choke an air-conditioned car. If you are about to over-take, they wheel to the right and left to block you, until you dare. You give up, they slow down to keep you trailing behind, they get to a narrow ramp and feign break-down, causing traffic grid-lock. They leer out of their windows at you in the comfort of your car as if to purvey the saying by John F. Kennedy, that a society that cannot help the many who are poor cannot save the few who are rich. While approaching a crowded area, they throttle down honking crazily. They represent a travesty of aero-dynamic law, taking sharp bends like grand prix vehicles, doing stunts that would make James Bond green with envy, yet the last thing they’re built for is abrupt manouvres.

They’re so lacking in understanding to anticipate danger or appreciate safety pre-cautions that need not be taught except to morons. They litter broken-down vehicles in the middle of no-where without caution, yet when accident occurs they’re reported as sane happenstance. They’re all the same, whether the refuse disposal truck, containerized trailers or oil tankers. They use their size advantage as legitimate weapon of mass destruction and prowl as death on the highway. You then begin to wonder, whether it is only in our country that the oil industry and international trade obtains. Trucks pile up on over-head bridges sagging under their weight to snapping point, stretching into Central Business Districts.

Some dump and bruise the tarmac with their fortuitous and selfish wares, having a no-holds-barred access to collector streets. The truck owners are not made to pay tax, neither would their merchandise improve our terms of trade. Thorough-fares get locked-down for repairs leaving commuters in agony, wasting man-hours. Sadly, if only rail and pipelines were working this grotesque phenomenon would have been curtailed. I’ m now writing this because the media is awash with opinion that keep missing the point or leaves the issue requiring fuller consideration.

To begin with, if containers were to be made fast on these beasts of burden, some of them are so dilapidated that the panel on which they’re embedded can easily be yanked off on impact. The bad roads to me are a saving grace, for no sooner tarred than these dare-devils flutter like bats out of hell. Some of the consignees are more powerful than government itself and road traffic wardens come a dime a dozen. Look at what happened in Kogi recently, even if the guy was ice-skating, he could not have gone that far painting a gory picture. He was obviously speeding. I’m of the view that accidents do happen but do not have to be that fatal unless caused by speed. Federal Road Safety Corps should be made to enforce speed-limiting devises on all vehicles plying Nigerian roads.

On the other hand, goof is a necessary but in-sufficient condition of the human mind to inflict carnage on his fellows. Against this backdrop, the working conditions of these truck drivers must be examined. They know no other life than on the steering wheel, where they work and live with the sun and rain beating down on them. They mingle with hawkers who under the cover of darkness resort to easy virtue, share diseases and beget children they might never know. I believe they’re capable of sharing the commonality of human rights and beings if given some decent treatment.

But they’re mostly young immigrants who have nothing to live or die, for N5000, meal and booze assured they’d undertake a trip to Maiduguri from Lagos. So, the freight forwarder capitalize on them. And why should trucks be plying the roads except in by midnight, from which countries are these scraps imported, whose job is it to stop them?