Trillium Gold Mines plans to start drilling on its 100 percent-owned Rivard property, located in the south-west of the Newman Todd project, in the last week of January to augment its major drill program already underway.

The new phase of 2021 drilling is expected to provide further understanding of the structural intersections and the high-grade veining in both along strike and depth at Rivard, where previous shallow trenching revealed “spectacular visible gold”.

The initial 5,000-meters drill phase on the Rivard property will target the lateral and depth continuity of the veining as well as the high-grade gold mineralization seen in the trenches, and the southwestern extents of the NT Zone, in areas of little historical drilling. The receipt of the drill permit for the Rivard property was announced on December 23. 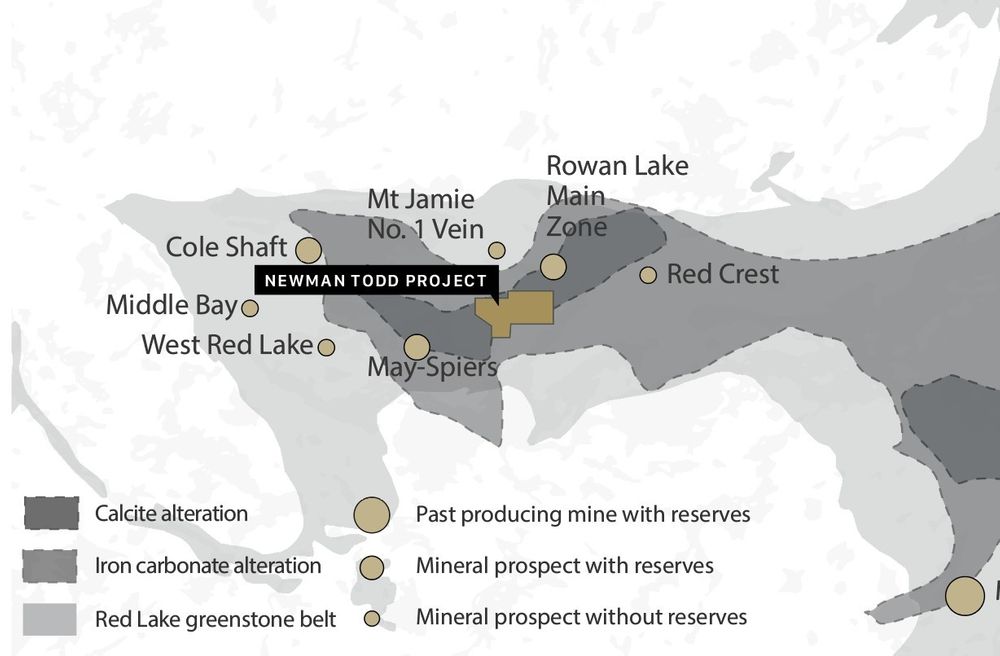 “This initial phase of drilling marks an important step towards expanding our understanding of the impact these structural intersections have on the Newman Todd Zone. It also increases our active exploration into known areas of significant high-grade gold mineralization. With limited work and non-traditional exploration methods carried out for over 20 years, it presents an uncommonly exciting situation given the prospectivity of the Red Lake gold camp,” said Bill Paterson, head of Exploration at Trillium Gold.

He added that preliminary ground inspection on the Rivard property late in summer 2020 confirmed multiple continuous gold-bearing quartz veins. The veins, exposed on surface and in historical drilling, typically strike at an azimuth of 140 degrees and dip steeply to the southwest.

“At Rivard, gold typically occurs in the veins as coarse, free gold (VG), whereas on the NT property, gold commonly occurs in carbonate- and sulphide-rich breccia horizons as well as in later quartz veins containing VG. Photo 2 shows excellent examples of quartz veining from the Rivard property in a fuchsite-rich host rock, with spectacular VG,” the statement continues.

Exploration has been carried out on the Rivard property since the 1930s. In the 1940s, Heath Gold Mines Ltd. collected a 64-ton bulk sample from several pits along a 200 metre length of the main gold-bearing trend. The bulk sample yielded 8.32 ounces of gold (approximately 260 grams of gold) and had an average grade of 0.13 ounces of gold per ton (approximately 4.46 grams per tonne).

In the late 1990s, Rubicon Minerals Corporation optioned the property which then became part of their Red Lake Joint Venture (RLJV) with AngloGold. In 2003 the RLJV was dissolved after AngloGold had earned an overall 60 percent interest.

Relinquishing all of their interests except for the Rivard and Newman Todd properties, in which it retained a 100 percent interest, demonstrated that AngloGold placed a very substantial value on both the Rivard and Newman Todd properties, now owned 100 percent by Trillium Gold Mines. After Anglo’s merger with Ashanti Gold Mines, it suspended all its exploration activities in Canada and terminated the option on the Rivard property.

The 2.2kms-long Newman Todd Zone has a 200-metre-wide structural target, located in the Red Lake Gold Camp. Earlier drilling had mostly focused on testing the zone by targeting the footwall with drilling toward the southeast.

Newman Todd is a highly prospective target with 41 percent of the 165 historic drill holes having intervals of greater than 20 g/t gold over various lengths. Nearly all drillings have been conducted to depths of less than 400 meters.

Here are some new tools coming to protect the supply chain