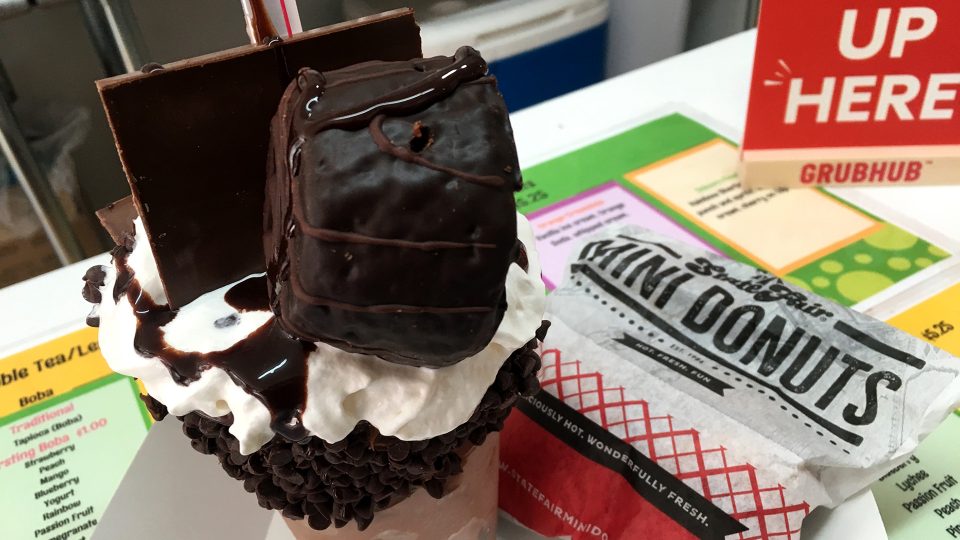 Libby Lou’s is a newish joint on the Indianola strip, just spitting distance from the immortal Studio 35. Of course in 2020, there is no “spitting distance,” as everyone is masked. Spitting is distasteful anyway.

Sitting in an older building, Libby Lou’s is homespun as opposed to sleek. It is packed full of hobnob bins of candies and confections, and photos and menus; all centered on sugar.

Libby Lou’s happens to be a spot where you can score those big milkshakes. You’ve seen food-porn pictures of them on the internet. What starts as a humble milkshake is then loaded down with an assemblage of cakes and cookies and sprinkles, held together with skewers and whipped cream. Libby Lou’s will make those for you.

But before you head out to get your milkshake, some facts. It takes awhile to make the shake. It’s not McDonald’s – it’s art. Honestly, even boring old-fashioned shakes take awhile at any spot. Ever waited behind someone ordering a shake at UDF? It’s an eternity. This will take even longer.

Second thing. You will get good bang for your buck. Watching the meticulous shake-making process, and asking questions throughout has led to some discoveries. The proprietor’s procedure involves measuring 20 ounces of ice cream and mixing it with 3 ounces of milk. That’s less than a half cup of milk for more than a pint of ice cream. The end product itself will be just barely suckable through a straw.

You can try lots of flavors. We did a Hershey’s Chocolate Boom. The top of the cup is frosted with chocolate icing, dipped in chips, filled with shake, then whipped cream, a chocolate snack cake, a chocolate bar, and some sprinkles. It’s gorgeous, difficult to eat, but certainly worth the effort and the mess.

The shake sounds like an accomplishment, but, when it comes to overload, the cotton candy burritos outshine the shakes. Consuming a cotton candy burrito has never been on the personal bucket list, but when the opportunity presents itself, it feels like a moral obligation to try.

The Buckeye Blitz Bomb burrito is made from fresh, spun-on-the-spot, milky-white spools of cotton candy – two spools. They’re formed into an oval nest into which ice cream (Buckeye Peanut Butter for us) and crunchy things (cocoa pebbles and peanut butter chips) are loaded. The cocoa pebbles are critical here: they provide an interesting crackle, and a milder foil for all the sugar. The cotton candy is folded over and drizzled with peanut butter and chocolate syrups.

In terms of the aforementioned burrito and shake, you might notice a personal bias towards chocolate and peanut butter. Rest assured, there is also an abundance of unicorn-rainbow-Skittle options for those who need festive pink and blue foods.

There are donuts as well: fresh-fried, little-bitty warm ones, coated in cinnamon sugar. While they might seem modest, compared to the other options, rest assured: you can drench the donuts with extra toppings, too. You can do it all at 3039 Indianola Ave.