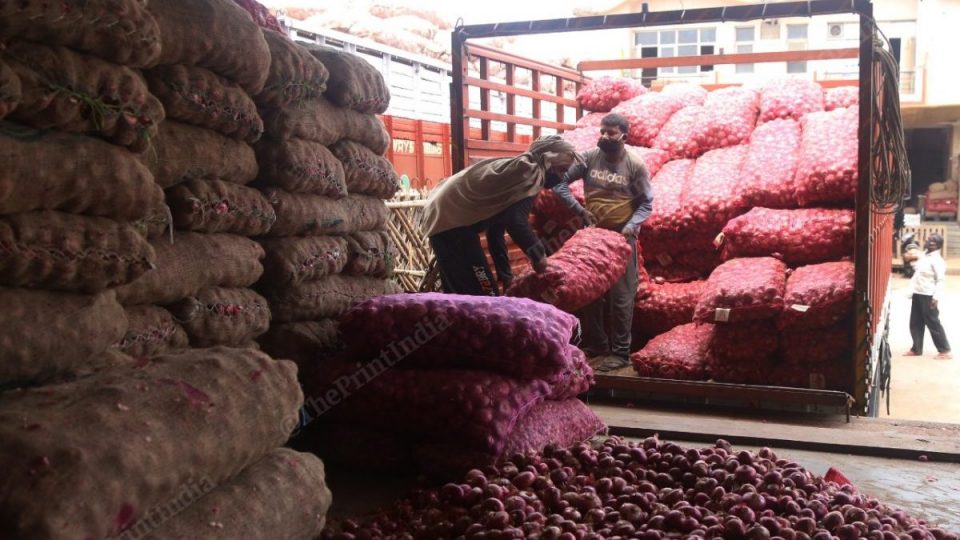 Traders in wholesale mandis have told ThePrint that prices of most vegetables are likely to remain above Rs 50/kg for the next few days.

With the lockdown imposed in parts of major onion and tomato producing states such as Maharashtra and Karnataka, prices of these two kitchen staples are expected to rise substantially.

Mintu Chauhan, a tomato wholesaler in Delhi’s Azadpur mandi, told ThePrint, “Price of tomatoes across Delhi could rise. The wholesale rate of this vegetable from Karnataka and Himachal Pradesh is already at Rs 40-50/kg. This rate doubles in the retail market.

Chauhan also said the season of tomato production in Himachal Pradesh and Haryana was almost over and they were now expecting a new crop from Karnataka, a major tomato producer, to cool off prices.

“The lockdown in Bengaluru is likely to cause a further shortage of tomato supply and the prices may go well beyond Rs 100/kg in retail markets in Delhi and its nearby states,” said Chauhan.

We are deeply grateful to our readers & viewers for their time, trust and subscriptions.

Quality journalism is expensive and needs readers to pay for it. Your support will define our work and ThePrint’s future.

ThePrint had earlier reported how wholesale rates of kitchen staples — onion, tomato and potato — had doubled in the major mandis (markets) across the country last month owing to an increase in the demand for vegetables.

Not only tomatoes, potatoes and onions, prices of several other vegetables have also increased by at least 30-40 per cent since last year.

In Delhi’s Azadpur mandi, for example, okra was priced at Rs 16/kg in July last year against Rs 24/kg this year, whereas potatoes were Rs 18/kg in 2019 compared to Rs 24/kg now.

Other vegetables such as bottle gourd and brinjal are being sold at Rs 14/kg and Rs 16/kg, respectively, this year as compared to Rs 20/kg and Rs 24/kg in July last year.

Not only lockdowns, the rise in fuel prices has also substantially affected retail rates of vegetables. Wholesale traders said there has been a steep rise in vegetable prices by at least 10-15 per cent due to a hike in diesel rates.

Awadhesh Singh, a wholesale onion trader in Delhi’s Ghazipur mandi told ThePrint, “The cost of transportation has increased when compared to last year, and especially over the last few days. Truckers and labourers have also increased rates, making up for the losses incurred during the nationwide lockdown, which has further hiked prices.”

He explained: “If we paid Rs 100 for a box of onions from Nashik to Delhi, now we have to pay around Rs 150-175 for the same box. With additional supply disruption from states, vegetable prices will further shoot up. We are expecting onions to be sold at around Rs 50-60/kg for the next few weeks.”

Not only Delhi and its neighbouring states, wholesale vegetable prices in markets across other metro cities have also increased.

Pradeep Sonkar, a wholesale vegetable seller in Kolkata’s Sealdah Koley market, told ThePrint, “Vegetables like tomato and potato have witnessed a major spike in prices as the mandi rates of tomatoes have gone up from Rs 18/kg to Rs 35/kg here, whereas the price of potatoes has increased from Rs 12/kg to Rs 27/kg in the last few days.”

Also read: No dal fry — why states have to make do with chana under Modi govt’s new round of food aid

News media is in a crisis & only you can fix it

You are reading this because you value good, intelligent and objective journalism. We thank you for your time and your trust.

You also know that the news media is facing an unprecedented crisis. It is likely that you are also hearing of the brutal layoffs and pay-cuts hitting the industry. There are many reasons why the media’s economics is broken. But a big one is that good people are not yet paying enough for good journalism.

We have a newsroom filled with talented young reporters. We also have the country’s most robust editing and fact-checking team, finest news photographers and video professionals. We are building India’s most ambitious and energetic news platform. And we aren’t even three yet.

At ThePrint, we invest in quality journalists. We pay them fairly and on time even in this difficult period. As you may have noticed, we do not flinch from spending whatever it takes to make sure our reporters reach where the story is. Our stellar coronavirus coverage is a good example. You can check some of it here.

This comes with a sizable cost. For us to continue bringing quality journalism, we need readers like you to pay for it. Because the advertising market is broken too.

If you think we deserve your support, do join us in this endeavour to strengthen fair, free, courageous, and questioning journalism, please click on the link below. Your support will define our journalism, and ThePrint’s future. It will take just a few seconds of your time.

Packaging station to meet the various demands from clients