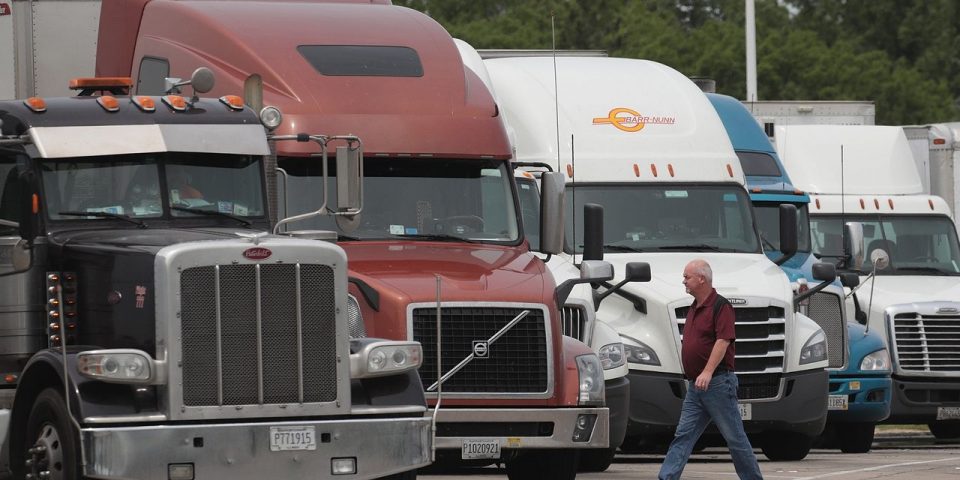 A rush to replenish inventories is bringing some life to the U.S. freight market. Trucking companies are reporting stronger freight demand heading into the fall, the WSJ Logistics Report’s Jennifer Smith writes, in a sign that companies are stocking their shelves again after pandemic-driven shutdowns. Less-than-truckload operators Old Dominion Freight Line Inc. and

both reported upticks in tonnage in the early weeks of the third quarter, gains that were small but significant following tumbling volumes amid this spring’s widespread lockdowns. Demand in truckload’s spot market is also picking up and freight rates are rising even faster because capacity has remained relatively tight. Retailers are trying to restock in hopes that the mid-summer upturn in consumer spending is a prelude to strong holiday-season sales. But overall freight demand is hardly robust, and many economists warn that the U.S. economic rebound may have already peaked without more stimulus help.

Big changes in automotive technology are reshaping the sector’s supply chains. A new strategic alliance between

Motor Cp. will have the auto makers cooperate on everything from engineering to purchasing parts, the WSJ’s Mike Colias reports, fortifying a budding collaboration focused on innovative technologies. Global car companies face pressure to invest billions of dollars on electric and driverless cars, technologies that are likely years from returning profits. At the same time, they must continue to fund the core business of making traditional vehicles, a capital-intensive endeavor with relatively low profit margins. The hefty cost burden has sparked a wave of new partnerships. One plan is for Honda and GM is to work together on purchasing parts for their North American operations, which could help them lower prices from suppliers. They’ll continue to compete, but they left the door open for GM to manufacture vehicles for Honda.

The Shanghai Shipping Exchange’s Comprehensive Index for container shipping rates from China to the rest of the world in the week ending Aug. 28, the highest level since September 2012.

The worst cargo maritime disaster in several years appears to be unfolding in the East China Sea. Japan’s coast guard was searching for 42 missing sailors, the WSJ’s Chieko Tsuneoka reports, after their cattle-carrying ship sank as a typhoon passed nearby. One crew member was rescued and told authorities the ship’s engine had stopped working and that it capsized after being hit by a large wave. The vessel was carrying around 5,800 live cattle from New Zealand to China, and many of the animals were seen drifting in the sea. Live-animal exports are a lucrative trade for New Zealand and Australia, but the transport conditions have raised strong criticism. The ship is owned by a Jordanian company that was investigated for safety issues after one of its vessels sank in the Black Sea in 2019 with more than 14,000 sheep on board. Twenty-two crew members were rescued from that ship.

“
We expect the strength in the broader freight market to persist through the end of the year.
”

U.S. imports rose 11% from June to July while exports grew 8.1% and remained behind pre-pandemic levels. (WSJ)

The number of Americans seeking and receiving unemployment benefits fell at the end of August. (WSJ)

expects demand to moderate after stronger sales in its quarter ending Aug. 2. (WSJ)

The pace of business bankruptcy filings in the U.S. slowed significantly in August from previous months. (WSJ)

will exit bankruptcy with a plan that hands the oil-and-gas producer to creditors. (WSJ)

The founder of hedge fund Marble Ridge Capital was charged with fraud for trying to suppress bidding for a piece of bankrupt retailer Neiman Marcus Group Ltd. (WSJ)

The U.S. Trade Representative is investigating Mexico’s exports of blueberries to the U.S. and questioning exports of other produce. (Miami Herald)

Global automakers are buying millions of dollars in carbon credits from

A Maersk Tankers vessel is stranded in the Mediterranean after rescuing 27 migrants from the waters a month ago and being denied docking rights. (Splash 247)

says it will guarantee debts only until mid-2021. (Australian Financial Review)

is adding 7,000 permanent staff in the U.K. and recruiting 20,000 seasonal workers to meet online shopping demand. (The Guardian)

PLC is moving toward autonomous procurement as it digitizes its supply chain. (Supply Chain Management Review)

Amazon plans to open a fulfillment center in Jacksonville, Fla., in the fall of 2021. (Florida Times-Union)

Write to Paul Page at paul.page@wsj.com

More snowstorms to disrupt Northwest US this week