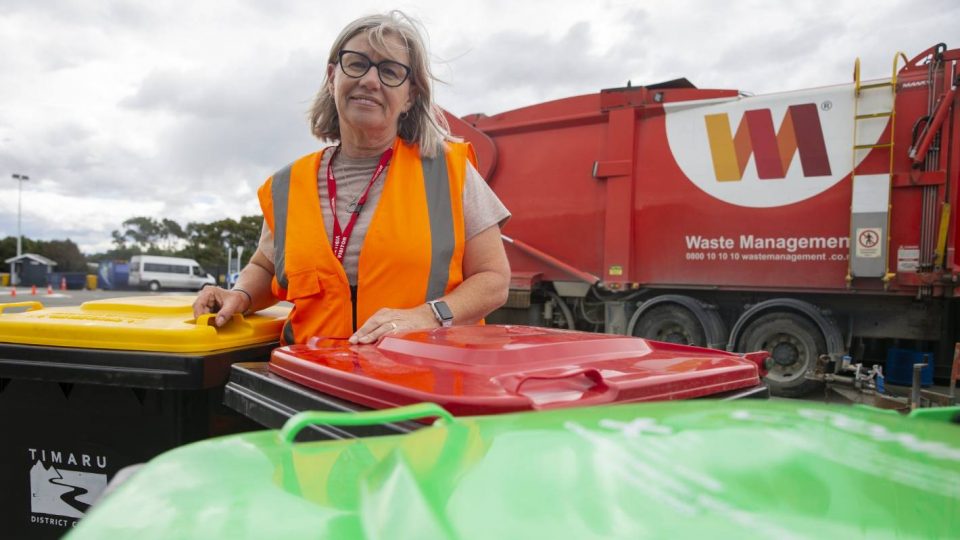 Timaru District Councillor and biodiversity champion Barbara Gilchrist is urging people to use the correct bins.

Hundreds of tonnes of contaminated material has been sent to Timaru’s landfill over the past few months, sparking a warning from the council that it could cost the district millions of dollars to clean up.

The Timaru District Council, launched the What’s In My Bin campaign in December, to promote better recycling, and fears the community is slipping into poor habits, with more than 45 per cent of recyclable material ending up in landfill because of contamination, in the first four months of this financial year (July-October).

Council group manager for infrastructure Andrew Dixon said in that time the council had collected more than 1780 tonnes of recycling and processed it through the Materials Recovery Facility (MRF).

He said the contamination situation had worsened over the November to December period, increasing to 46 to 47 per cent “which is why we wanted to start getting the message out to the public that we need to improve how we do things”.

READ MORE:
* Timaru District Council launches ‘what’s in my bin’ campaign as recycling slips
* Council moves to cut plastics collected for recycling
* Christchurch recycling in a mess as hundreds of tonnes sent needlessly to landfill
* Residents asked to hold on to green waste during lockdown

“Timaru has always been one of the leaders in good waste management in the country,’’ Dixon said.

“We’ve had some setbacks in 2020 with overseas markets closing and mixed messaging around recycling with Covid-19, but now is the time to get back on track to really up our game,” Dixon said.

Timaru District Councillor and biodiversity champion Barbara Gilchrist, also chairperson of the environmental services committee, said it was vital for people’s recycling behaviour to improve, or else the district risked the landfill’s lifespan drastically reducing.

“If we continue down the path we are now, then the landfill’s lifespan could be reduced by several years.

“Landfills are expensive: new ones can cost up to $50 million, and that’s a real waste when you think where that money could go to in the community,” Gilchrist said.

“We already have these wonderful recycling facilities, but we need to get the most out of them.”

The council’s What’s In My Bin campaign includes campaigns reminding households how to use the ‘three bins’ system, and also offering spot prizes for people who recycle properly.

There were a number of contributing factors to this increase, Dixon said.

“There was confusion about what bins to use for different things and whether recycling or composting was happening, so people essentially got into the habit of using both the red and yellow bins as general rubbish bins, and not everyone has switched back to separate out recyclables from rubbish.’’

Dixon said rules have changed as well within the recycling world.

“Because of changes for overseas markets for things like cardboard, paper and plastics, New Zealand waste companies can only take certain types of materials and in a certain way,” he said.

“Hence, now we can only recycle plastics with the 1, 2, or 5 symbols within the triangle, and all lids and tops need to be off all clean containers.”

Dixon also reminded the public that when only one bin has a high level of contamination and is picked up, it can contaminate the whole truckload of recycling.

“It gets all over everything,” he said.

Gilchrist said the district used to be a “leader” in waste management and recycling, and now it was “well behind the pack”.

“When you look at Ashburton, they have about four per cent of their recycling going back to landfill. We want to beat Ashburton.”