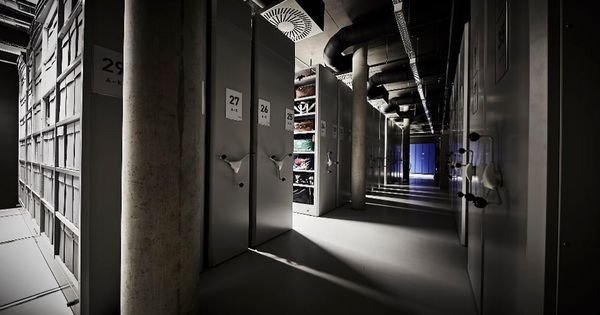 The museum-quality white gloves used to handle items within the Adidas archives come branded with the three stripes. They’re a popular item at the Adidas headquarters in Herzogenaurach, Germany. But it rests on the Adidas history management team to not only control the use of those white gloves, but also manage the 40,000 products within the physical archive inside the Laces building on the German campus.

“Those gloves have become pretty iconic,” says Martin Gebhardt, part of the history management team. “When a product lands in the archives it is treated like a museum product.”

The 2,700-square-foot space rests behind lock and key and entry is by appointment only. Holding shoes, apparel, balls and accessories dating back roughly 100 years, the team keeps the space at a constant 18 degrees Celsius (64.4 degrees Fahrenheit) and at 55 percent humidity. At another location on campus, the team manages an additional 4,400 square feet of archive space dedicated to catalogs, digital files and patents.

It’s the product-only archives, though, that capture the most attention. From a pair of “boots” that German national football player Max Morlock wore during the historic 1954 World Cup win in Switzerland only five years after Adi Dassler officially formed Adidas to a pair of the original Superstar shoes made in France in 1970, before the trefoil logo was created and added to the silhouette in 1972, and even some of the oldest signature shoes in sports, such as original Rod Lavers, Stan Smiths and Billie Jean Kings — there’s even a bronzed pair of Jerry West-worn Superstars — the collection officially formed in 2011, but has product dating back to a pair of spikes Dassler created in 1925.

Every pair of shoes stored in the archives gets the same treatment, tucked inside an archive box and labeled with an image and object number (F stands for footwear, B for the right shoe, A for the left). Inside the box, acid-free paper helps the shoes stay in the best condition possible. Every item in the archives also gets professionally photographed from four angles and then placed into a digital archive that Adidas designers can access from anywhere in the world.

Gebhardt says designers use the archives both as inspiration and for a way to explore materials. “Some of the shoes go really way back and the leather shoes are in much better shape,” he says.

The archives aren’t just about shoes. Adidas started making apparel in 1967, largely out of its French location. From a 1980s floral artwork shirt worn — and signed — by Steffi Graf, the only player to ever win tennis’ Golden Slam, to a dress Caroline Wozniacki wore for the London Olympics in 2012, the first time Stella McCartney designed Olympics outfits for Adidas, Sandra Trapp, a member of the history management team, says the archives allow designers to create new stories by exploring past ones.

“These products have loads of stories to tell,” she says.

Each apparel item is placed within a fire-resistant cover that also protects against dust and color migration.

The archives contain plenty of extras, such as a bag collection that includes the earliest of Adidas bags. The collection features a backpack made for Team USA for the 1994 World Cup — this goes along with the star-adorned team jersey in the apparel section and cleats worn during the tournament in the footwear section — and even an early tennis bag. “There are loads of stories to tell in the bags collection,” says Trapp. “It is a niche collection for us.”

A few pieces of equipment, such as early badminton and squash rackets, go along with about one thousand balls. Every single ball is kept the same way, protected and boxed within the archives. The balls are all pumped once a year, so the internal bladder won’t break.

“All of these products were played with and have stories to tell,” Gebhardt says about the balls. “We try to keep balls for the moments because at the end of the day we look at what is really relevant, such as when a medal was won, a clear favorite lost or an underdog won. It is not just the product, material development or color, we are keeping sporting and cultural moments. That is one of the key functions.”

On the other side of the archives from the balls comes the most Instagrammed area of the archives, a cupboard that contains a shoe box collection. “It is very hard to collect shoe boxes because those are the first thing you throw away,” Trapp says. This collection, though, has one of the oldest Adidas shoe boxes from the 1950s in the brand’s blue. It also contains boxes from a Billie Jean King Shoe, boxes from France, from Japan and even from the Run DMC collaboration in the 1980s.

With Adidas creating about 2,500 products per season — and with two seasons per year — there is no way to keep an example of every product. That’s why the memorable sporting moments matter so much. The products that make the cut are usually athlete-worn and often represent a prototype or an introduction of a new technology.

“We are looking for big moments, milestone innovation in technical material design,” Gebhardt says. “Very often products that become a story we try to add.” If a new technology enters a running shirt, for example, it may get produced in 20 different colors, so the archive team keeps the most relevant or most striking. “We rely on colleagues and ask them what they think is worth keeping and we establish a dialogue.” In that way, Adidas saves about 10 to 20 percent of product from each season.

The archives offer a constant source of inspiration for designers. The popular Nite Jogger model of today takes cues from the original Nite Jogger, made in France in the 1970s. While the main similarity between the two is the reflectivity, the original in the archives still helped define the modern silhouette.

“We try to help our product designers with genuine products and leave it up to their inspiration,” Gebhardt says. “It doesn’t make sense to bring back a shoe from the ‘80s one-to-one because technology has advanced, but it is nice to see how product creation translates that expertise into something new. A company archive can benefit a company, not only in archiving the product, but inspiring and creating new product.”

But getting into the archive isn’t as simple as knocking on the door and strolling through the aisles. When a designer has a question or wants to see something, an appointment is needed, as the team members must prepare the product for display. “We are flooded with people wanting to see the archives and see product,” Gebhardt says. “We need to manage it. We need to prepare for visits, we can’t just have people walk in and walk down any corridor and pull boots. Basically, we are very popular, and this is a good thing.”

The requests — and there are over a thousand every year — to see product in the archives differ too, whether a designer working on a new silhouette or when a new collaborator — whether Kanye West or Beyoncé — want to come in and gain a better understanding of the brand. “Pharrell wanted to see the space to get an understanding of what the brand is about, so we gave him an overview of the types of products and even those weird bits he might not be interested in,” Gebhardt says. “We use our expertise to pull out stuff from our collection that might inspire people. A lot of it is about engaging in a conversation.”

Trapp says it is the stories behind the product that make the emotion, that gives designers inspiration to create new product and fresh stories.

With nearly a dozen full-time or part-time employees, the history management team includes experts from different fields, whether with backgrounds in engineering, museums, history or communications. Adidas uses the same system for its archives as many of the big gallery museums, such as London’s Tate. “At the end of the day, it is about consistency and detail,” Gebhardt says. “That is what takes the time, to add all the information, part of the product, the story, the measurements.” There is a constant process of staying up to date on processes.

The team has spaces on campus to create their own museum-like displays, whether to celebrate the 70thanniversary of the brand or the upcoming anniversary of the Superstar. With the importance of the archives only growing maybe someday those white gloves will have a special place all their own, kept at a perfect 64.4 degrees.

Breaking News! Per Angusta partners with Darkbeam to expand risk visibility for procurement

Insert Coin, the arcade documentary worth feeding all you quarters into