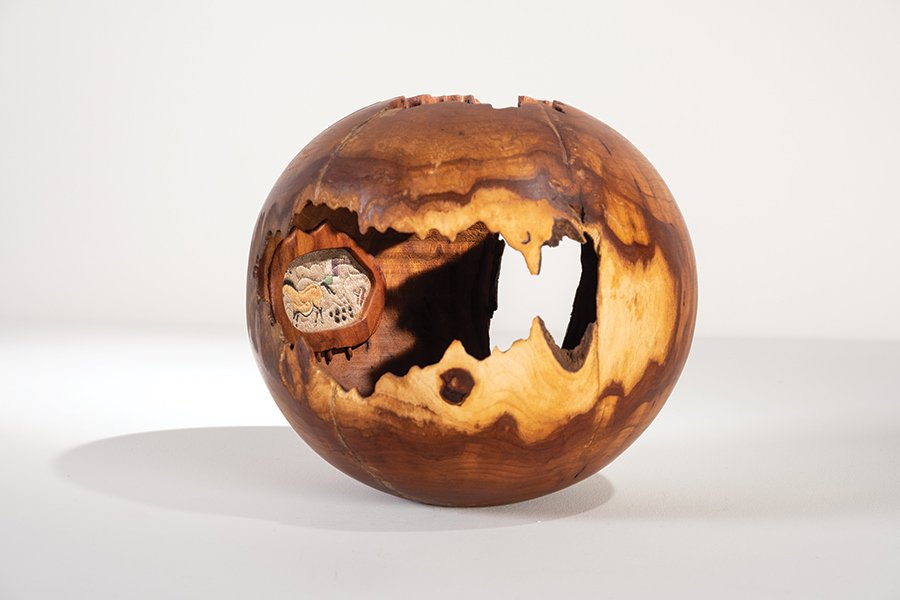 According to its curator, Annemarie Sawkins, the “On the Nature of Wisconsin” exhibition “is a celebration of the way artists have explored, interpreted and presented nature in their work.” Her conceptual conceit piqued my interest as America ca. 2020 remains bedeviled by various schisms. Having lost my NPR feed to an impeachment trial and my social media to missives from evangelists on either side of any number of ethical divisions, I’ve actually been forced to read more paper, including the release from The Warehouse that eventually brought me to this exhibition. So, maybe there’s a silver lining in the rancor? Still, all the butt-soreness and righteousness is unbecoming to everyone.

These ugly socio-political divisions map onto the art world counterintuitively, with two basic positions emerging from the battle lines: One in support of canonical continuity and another in favor of disruption and dissolution. Traditional tastemakers vs. social media levelers. And it’s a funny thing that in this admittedly simplified scenario, the art conservatives and the political conservatives are geographically inverted, with the old-guard art institutions situated firmly in the bluest and most progressive portions of the political map. And this puts art from earthy hinterlands like ours in a great position to squeeze ointment into national wounds.

“On the Nature of Wisconsin” gives us a lot of natural salve. Each of the works in the show is rooted somewhere in the Wisconsin soil. Of the dozens of individual pieces, some are of nature that happens to be in Wisconsin, and the rest channel the deeper spirit of this particular place.

Once upon a time, aspiring to such regional peculiarity might have been a declaration of irrelevance, but it smacked at The Warehouse as being a downright progressive act, and as soon as I saw Kevin Miyazaki’s trio of photographs taken from the shores of Lake Michigan, it seemed that regional perspectives might actually carry redemptive possibilities. These moody water portraits are from his Perimeter project, in which he snapped the lake from different spots: Milwaukee, Namur and, in this case, Washington Island.

They are of a single, unimaginably complex entity, captured by Miyazaki with deep sensitivity, whose identity naturally tends to condense in the minds of those not within its watershed. In three wonderful photographs, we are privy to three completely individual perspectives on the prodigious body of water. Perhaps they’re symbolic of our current tribal dystopia: A state full of mythical boogeymen, deplorables, liberals, hillbillies, etc., named by those who haven’t left their neighborhoods in years to corroborate their anxieties.

The presence and value of water permeates the exhibition. Given fresh water’s future importance, and Wisconsin’s special position in the discussion, this seems appropriate. Eddee Daniel’s Seiche features what appear to be six blue and yellow abstract paintings lying in a grid flat on the floor. However, closer inspection reveals them to be birds-eye photos of fallen honey locust leaves swirling atop the Menomonee River during its river-equivalent of high tide. It’s a most seductive way to encourage one to look closer at a local slice of nature often taken for granted.

As he’s done effectively for decades, Tom Uttech offers work that spin the magic of the Northwoods, pine needle by pine needle with granular specificity, compositional mastery and pulsating color. You can’t get more regionally specific than his watercolor, Nin Nenawina, of fir trees and outcroppings backlit by a luminous, orange sunset. This work reflects the idiosyncrasies of the place in which it was made as well as any two-dimensional work ever could.

A number of fine examples of 3D are also present, such Erich Moderow’s untitled, canoe-like structure of formed, parallel lengths of wood, as well as turned wood bowls by Tom Rauschke that speak to the legacy of fine traditional craft in the area. In the vitrine at The Warehouse, those turned wood bowls looked as edgy and fresh to me as the recent Miami art fairs looked bloated and tired.

Since I can remember, rules and not exceptions have guided the values of the orthodox art world. Canons, after all, are rule-making machines. The rules they wrote came with the idea of exceptions, diversity and strangeness baked in; but still, they preferred their own, mostly coastal narrative. But things appear a little different lately. An institutional thaw feels possible. Yale University, in fact, just announced it was ending its art survey course, “The Renaissance to the Present,” due to the inadequacies and limitations of that narrative.

Sawkins’ show is apolitical and certainly has no direct designs on these issues, but that doesn’t mean she hasn’t tapped into something that’s accumulating in the groundwaters. I think as we continue to divide, simplify and consolidate into tribes, the chances of exploding back into a million unique, individual particles will increase. It’s not a million, but “On the Nature of Wisconsin” offers delightful particles by at least 40 unique Wisconsin individuals hoping to get that explosion started.

The “Stolen Sisters” art exhibition features 30 indigenous local, regional and national artists’ and allies’ technically diverse work that specifically addresses a range of experiences and emotions surrounding the violence against, and loss of, indigenous women and girls. Materials range from works on paper, mixed-media installation, metal, clay, quillwork, textile and paint. The issue of missing and, indeed, murdered indigenous women has risen to national attention of late. The choice to use Crossman Gallery as a platform for this project is because Wisconsin is home to 11 registered tribal communities, and the adjacent Highway 90 acts as a main corridor for missing persons. With four out of five Native American women affected by violence in today’s society, it is vital that these issues are given a voice in this region.

This major art exhibition features several bodies of new work by artists Lauren Semivan and John Shimon—both collaboratively and independently. In Semivan’s ongoing series of staged studio photographs titled “Sight’s Periphery,” she constructs sculptural environments on a studio wall. Working like a painter, she adds objects, string and other ephemeral materials to slowly build a composition before photographing the set using a camera from the early 20th century. The resulting silver gelatin prints are both lyrical and formal, utilizing the languages of drawing and painting while maintaining a conversation about photography, history, memory and representation. From Shimon comes a series of oil paintings depicting death visions. Vintage paper dolls are placed within abstract watercolor landscapes; the resulting images are whimsical, yet dark. Figures from another syrupy, nostalgic era loom post-apocalyptically.

MIAD welcomes renowned painter, sculptor and activist Titus Kaphar in the institute’s “MIAD Creativity Series.” In his public presentation, “Making Space for Black History: Amending the Landscape of American Art,” Kaphar confronts the history and canon of Western art head on, exposing troubling histories of our nation’s past and amplifying the voices of those who cannot speak for themselves. Kaphar’s numerous accolades include being named a 2018 MacArthur Fellow, 2018 Art for Justice Fund grantee and 2016 Robert R. Rauschenberg Artist as Activist grantee. His artworks capture the spirit of social justice and change in America today. For tickets and more information, visit miad.edu.