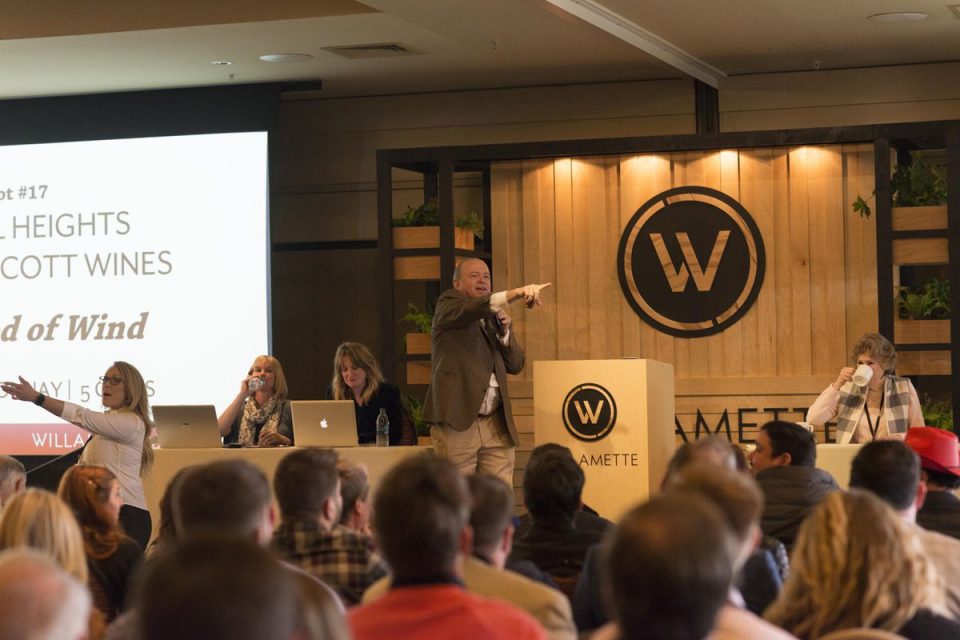 Last year Willamette: the Pinot Noir Auction raised over $1 million to support the promotion of the Willamette Valley Wineries Association. The spring event typically welcomes wine trade and media to the Allison Inn and Spa in Newberg, Oregon, but this year COVID-19 caused the organizer and participating wineries to reconsider. As with everything else, 2020 played her own hand and changed the game.

The auction was delayed and reconstructed to a virtual capacity running from August 11th – 13th, during which time members of the trade can place bids through an online auction site. The event culminates on August 13th, when auctioneer Fritz Hatton presents the Live Closing of the Lots, which will broadcast virtually here.

Also new in 2020, funds raised will benefit a charitable partner. While pre-set minimum opening bids for lots will continue to support Willamette Valley marketing, proceeds above that threshold will benefit the James Beard Foundation’s Open for Good Campaign with funds dedicated to the Food and Beverage Investment Fund for Black and Indigenous Americans.

Portland Trail Blazers guard CJ McCollum will be the 2020 Ambassador for the auction. McCollum recently announced the launch of McCollum Heritage 91, his wine brand partnership with Adelsheim Vineyards. McCollum is currently inside the “NBA Bubble,” the isolation zone for full-time NBA players at Walt Disney World Resort. (Side note: According to ESPN, wine has been a highly popular request from inside the bubble.)

Leading up to the auction, nearly 80 wineries and winemakers hosted a collection of virtual tastings, which were open to both trade members and consumers, a rare opportunity to experience the “classic” 2018 vintage, which is highly anticipated. “I don’t want to reminisce too much,” says Joe Ibrahim, head winemaker at Willamette Valley Vineyards. “But this is a top vintage coming out of Oregon.”

The auction offers five, ten and 20 case lots of Pinot Noir and several collaborative Chardonnay projects, available exclusively to the trade, granting restaurants, wholesalers and retailers access to exclusive bottles to add to their program or portfolio. This a rare opportunity; the only one of its kind in Oregon and one of a just a handful of similar trade auctions across the country.

Morgan Beck, winemaker at Johan Vineyards in the Van Duzer Corridor AVA, said that 2018 provided “a lot of freedom to let the fruit hang on the vine.” The growing season experienced a warm start that lead into many sunny days and cool nights, a moderate atmosphere that was friendly to the wine growers of the Willamette Valley.

“It’s a Goldilocks vintage,” says Alfredo Apolloni, owner and winemaker at Apolloni Vineyards, located in one of the most northern spots in the Willamette Valley growing area. His auction contribution, Lot 33 King of the North, was crafted to reflect the 2018 vintage, as well as the winery’s multi-generation heritage, which is closely tied to Apolloni’s Italian homeland. “These wines from the valley are unique and super interesting.”

This is important for buyers looking to bid on wines that tell a story for consumers. According to Silicon Valley Bank’s State of the Wine Industry Report 2020: “The better-quality regions of Oregon…remain on a strong double-digit growth path.” The region appeals to drinkers and having a storybook vintage to highlight adds to the attraction.

Joe Wright, director of viticulture and winemaking at Left Coast Estate, has been in the Willamette Valley for nearly 25 years and he says that “every vintage is different.” To illustrate 2018, his Lot 37 blends a trio of vineyard designated blocks in the Van Duzer Corridor AVA.

Lot 35, The Terminal Moraine, comes from Gran Moraine. Winemaker Shane Moore says this is a barrel selection from two vineyards that were warmer, early harvest sites. “This wine is crisp, coiled, tightly wound, maybe an outlier for 2018.” With only 60 bottles available, exclusively through the auction, this is the sort of gem that excites bidders.

To be a part of it, connect virtually on Thursday, August 13 at 12pm (PDT). For 90+ minutes, Fritz Hatton will lead viewers through dozens of lots in a “fast-paced finale” event, which will be available on YouTube. Details on how to watch can be found here.  The auction catalog is also available online.