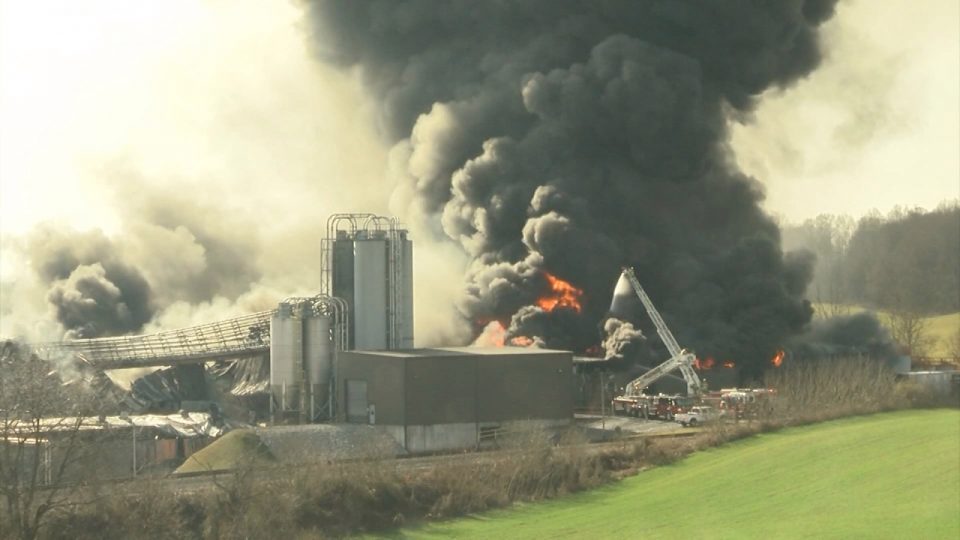 JONESBOROUGH, Tenn. (WJHL) One person was injured in a fire that started early Thursday morning, at a local rubber manufacturing plant and continued to burn late into Thursday night.

Multiple fire departments were called to the Hexpol Compounding Plant, a Swedish-based plant, on Old State Route 34 in Jonesborough.

Firefighters were called around 2:30 Thursday morning about a possible explosion. Traffic along SR-34, as well as judge vines and shell roads were impacted in several hours..

Firefighters are focusing on two things: getting the fire out and preventing runoff water from getting into the creek running beside Hexpol.

In the meantime, News Channel 11’s Pheben Kassahun spoke with one of the 22 employees who was able to make it out safely, and gave her details about those moments to their escape.

Hexpol Compounding employee, Christian Taylor said, “I was just sitting on break, sitting in the supervisor’s office. We were sitting and talking about what we had coming up. The next thing I know, the fire alarm goes off and everybody was told to evacuate the building.”

Hexpol employees arrived to work at 9 p.m. Wednesday night, assuming it would be a normal work day.

Taylor told Kassahun, “We were all spread out throughout the building. We had people- we had two or three on the top floor, we had a couple on the mixer floor and we had a bunch of guys downstairs as well.”

He was among the 22 employees who were able to get out of the Jonesborough rubber compounding facility, within minutes.

“Yeah, yeah I’m fine. Everything’s going to be alright,” he explained. “Luckily, we’ve done a lot of fire escape drills and different emergency evacuation plans. Everybody knew where to go and how we needed to get to where we needed to be, to make sure we can gather together to make sure we had everybody.”

He is more concerned about his colleague who was reportedly taken to the hospital after suffering from burns.

“We really appreciate the first responders who have been very professional in helping us through this, but our main concern right now is with our employees, particularly the one that’s injured and also with our customers and that’s what is foremost on our mind now,” Hexpol Compounding chief financial officer, Ernie Ulmer said. “We have several plants in this region and so their product will be made at those plants so that their production may continue.”

The fire is still under investigation.

Emergency departments have another thing on their radar: the remnants of the water being used to put out the fire.

“Most of the smoke is going up. There’s not a lot of factors as far as impending on houses and things like that.” Sells said, “As you can see, we’re putting a lot of water on it. Basically, 2,000 gallons per minute since this thing started, so that water has to go somewhere.”

They have learned the runoff water has contaminated Little Limestone Creek, which flows right next to the plant and will affect the water for livestock. Sells said crews are working diligently to contain as much of the runoff as they can.

Sells said, “We’re actively, actually at the moment building a dam down near Davy Crockett to try to contain some of the material that’s actually floating on top of the water, so we can remove that from the surface.”

Emergency management crews said it could take up to two weeks for the water to be safe for livestock.

As for the injured employee, his condition is unknown at this time.

Shipping is on the cusp of a tech revolution